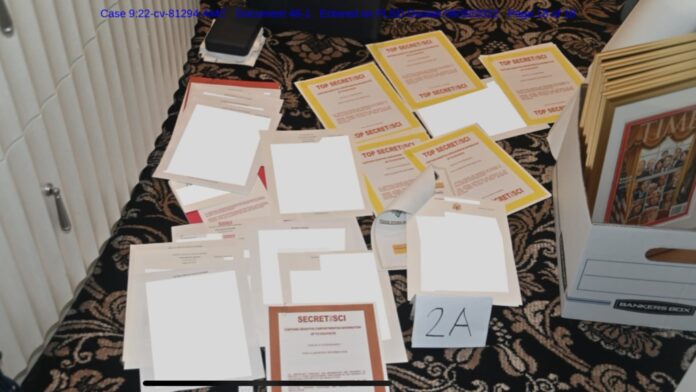 Documents seized by FBI from Mar-a-Lago

Two court documents related to the FBI raid on former President Donald Trump’s Mar-a-Lago home were unsealed Friday, one showing a detailed inventory of items seized, and the other giving the status of a preliminary review of those items.

The public release of those documents came a day after Judge Aileen Cannon said she would unseal them. The Department of Justice filed the documents earlier this week in federal court for the Southern District of Florida.

A less-detailed property receipt was made public days after the raid as an attachment to the search warrant the FBI used to enter that private club in Palm Beach, Florida.

That property receipt noted that the government seized 11 sets of classified documents, as well as an executive grant of clemency regarding Roger Stone, a longtime Republican operative and Trump confidant. But the receipt offered few other details about the contents of the 20 boxes taken in the raid.

The other document unsealed Friday is titled, “Notice of Investigative Team of Status of Review,” and was signed by Miami U.S. Attorney Juan Gonzalez, and Jay Bratt, the chief of the counterintelligence and export control section of the national security division of the Justice Department.

“It is important to note, ‘review’ of the seized materials is not a single investigative step but an ongoing process in this active criminal investigation,” the document says.

The DOJ is investigating possible crimes related to the removal of those and other government documents from the White House when Trump left office in Jan. 2021.

By law, such records must be turned over to the National Archives and Records Administration.

The raid on Mar-a-Lago was conducted pursuant to a search warrant authorized by another judge.

Trump has asked Cannon to appoint an independent watchdog, known as a special master, to review the items seized in the search before the DOJ is allowed to continue using the documents in the investigation.

Trump’s lawyers have said a special master could check to see if some documents would be prohibited from being used in the probe because they are protected by either attorney-client privilege or executive privilege.

The DOJ has opposed the appointment of a special master, saying that it would delay the investigation, and that Trump does not own the documents.

Cannon, during a court hearing in Florida on that dispute Thursday, said she will issue a ruling on the special master request in “due course.”

Cannon, a Trump appointee, previously shared her “preliminary intent” to grant Trump’s request for a special master. The judge suggested in Thursday’s hearing that she is still considering that appointment, news outlets reported.

Inflation is peaking, and that is ‘nirvana’ for stocks, Jim Cramer says