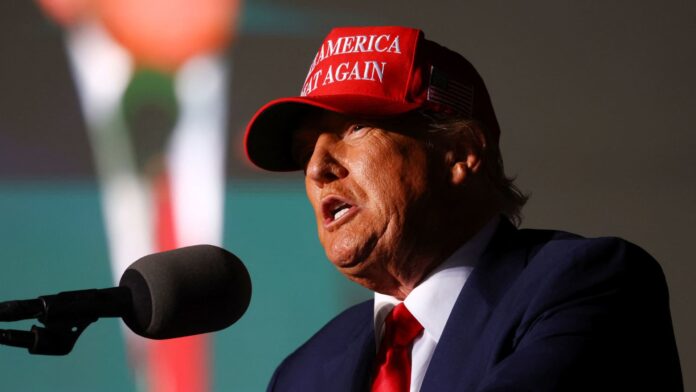 WASHINGTON — After weeks of intensifying speculation, former President Donald Trump said Monday that he will make a “big announcement” on Tuesday, Nov. 15 from his Mar-a-Lago resort, where he is expected to launch his 2024 presidential campaign.

“I’m going to be making a very big announcement on Tuesday, Nov. 15 at Mar-a-Lago in Palm Beach, Florida,” Trump said at a Save America rally in Vandalia, Ohio on the eve of the midterm elections. “We want nothing to detract from the importance of tomorrow,” he added, seemingly in an effort to explain why he wasn’t announcing his run that same night.

Trump was reportedly considering whether to announce the start of his third presidential campaign on the eve of Election Day, but national Republicans reached out to him and urged him to hold off, fearing that his announcement could energize Democrats and potentially alienate independent voters.

Trump’s line about Nov. 15 came near the end of a more than 90 minute speech, during which he railed against Democrats, judges who have ruled unfavorably in cases against his family, run down U.S. airports and above all, President Joe Biden.

A Trump spokesman did not respond to a request from CNBC to confirm that his Nov. 15 event will be a campaign launch.

But Trump is eager to jump start his third campaign for president, and preparations for campaign infrastructure and staffing have ramped up significantly in recent weeks, and an early list of potential top aides has already trickled out.

Trump’s speech in Ohio included relatively few mentions of the Republican candidates he was in the state to promote, although several of them were invited up on stage for brief remarks with Trump.

An awkward moment occurred when Ohio’s Republican governor, Mike DeWine, was booed by the crowd as he came on stage. DeWine is considered a moderate, establishment Republican who did not endorse one of the animating principles of Trump’s MAGA movement: The false claim that Trump was the rightful winner of the 2020 presidential election.

Instead of focusing on the Republicans up for election on Tuesday, Trump’s remarks sounded more like a tailor-made rally speech for his own upcoming presidential campaign, with strong echoes of his 2016 campaign speeches.

Trump leaned heavily into themes from his 2016 campaign such as illegal immigration and crime, saying Democrats had allowed undocumented immigrants to enter the country and commit violent crimes.

To illustrate his point, Trump told an anecdote about the sentencing earlier this year of a gang member convicted of for his role in the brutal stabbing of a teenage boy.

But the crime that Trump was blaming Democrats for on Monday, in fact took place in 2018, when Trump was in office.

“These people are animals,” Trump said, before noting that House Speaker Nancy Pelosi had previously objected to his referring to people as “animals.”

“Of course, I think she’s an animal, too,” Trump said of Pelosi, pausing to let the crowd cheer his remark.

Trump then quickly pivoted to how the news media would surely say, “Oh, what a horrible thing he said about Nancy!” But it was justified, Trump said, because “She impeached me twice for nothing. Nothing!”

The Democratic House Speaker has long been a target of fierce verbal attacks from Republicans. But these words were cast in a new light this fall, when a conspiracy theorist broke into Pelosi’s San Francisco home on Oct. 28 and attacked her husband, Paul Pelosi, with a hammer.

The attacker, identified by police as David DePape, said his goal was to kidnap the House Speaker and break her kneecaps.

As Trump inches closer to formally kicking off the 2024 presidential race, polls show he enjoys unparalleled support among Republican voters.

Trump averages more than 20 percentage points over his closest rival, Florida Gov. Ron DeSantis, a Republican who is the only other candidate with support consistently in the double digits.

Trump would also enter the race with more than $60 million in cash held by his leadership PAC, Save America, and a prodigious fundraising operation that vacuums up small dollar donations at an unprecedented rate.

Should Trump seek and win the Republican nomination, he would likely face President Joe Biden in a rematch of the 2020 presidential election.

Biden has yet to formally launch his reelection campaign, but plans for it have reportedly solidified in recent weeks.

How to unsend iMessages in iOS 16 on iPhone

Stock market IPOs went from boom to bust in 2022