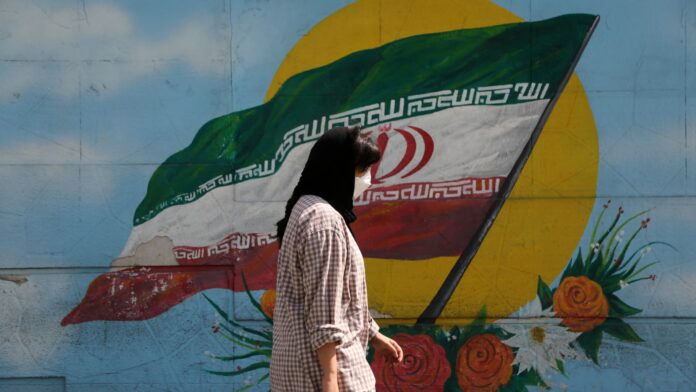 A woman walks on the street in Tehran, Iran on Sept. 22, 2022. In the evening, Iranians have taken to the streets to protest after the brutal death of a 22-year-old woman, Mahsa Amini, who was arrested by the country’s morality police for alleged violation of the Islamic dress code.

The United States on Thursday imposed sanctions on Iran’s morality police over allegations of abuse of Iranian women, saying it held the unit responsible for the death of a 22-year-old in custody that has sparked protests around Iran.

The U.S. Treasury Department also accused the morality police of violating the rights of peaceful protesters and said it had imposed sanctions on seven senior Iranian military and security officials, including the chief of the Iranian army’s ground forces.

Public outrage in Iran over Mahsa Amini’s death last week showed no sign of abating after days of protests in Tehran and other cities, with protesters torching police stations and vehicles earlier on Thursday and reports of security forces coming under attack.

Amini, a Kurdish woman, was arrested by the morality police in Tehran for wearing “unsuitable attire” and fell into a coma while in detention. The authorities have said they would investigate the cause of her death.

“Mahsa Amini was a courageous woman whose death in Morality Police custody was yet another act of brutality by the Iranian regime’s security forces against its own people,” Treasury Secretary Janet Yellen said in a statement.

“The Iranian government needs to end its systemic persecution of women and allow peaceful protest,” U.S. Secretary of State Antony Blinken said in a separate statement.

Iran’s Mission to the United Nations did not immediately respond to a request for comment on the sanctions.

A senior State Department official, speaking to reporters on the condition of anonymity, said there would be more steps in the coming days but did not provide any details.

Asked if the U.S. government was ready to provide Iranians with internet service via satellite, the official said: “We’re looking at what we can do to provide greater support to those who are trying to express themselves peacefully… and we’ll have more to say in the coming days.”

Access to social media and some content is tightly restricted in Iran and internet monitoring group NetBlocks reported “near-total” disruption to internet connectivity in the capital of the Kurdish region on Monday, linking it to the protests.

It identified the others as Haj Ahmad Mirzaei, head of the morality police’s Tehran division during Amini’s detention and death; Salar Abnoush, deputy commander of Iran’s hardline Basij militia; and Qasem Rezaei and Manouchehr Amanollahi of Iran’s Law Enforcement Forces.

All property and interests in property of those designated that fall under U.S. jurisdiction was blocked and must be reported to the Treasury, the department said.

Foreign financial institutions that knowingly facilitate a significant transaction or provide significant services for those sanctioned could be subject to U.S. penalties, it added.