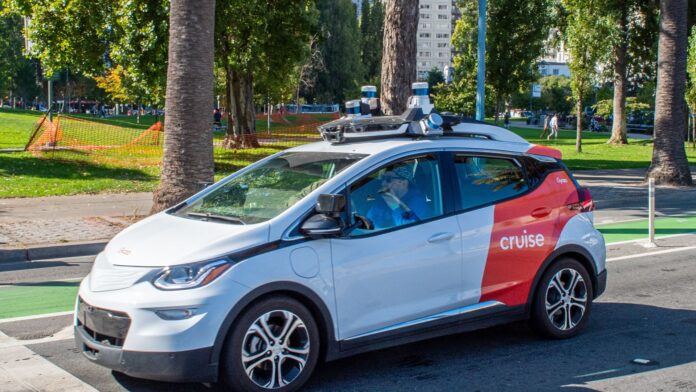 A robot car of the General Motors subsidiary Cruise is on a test drive in 2019.

Federal vehicle safety regulators will investigate a crash last month in which a vehicle struck a self-driving car from General Motors-backed Cruise. The incident resulted in minor injuries.

Occupants of both vehicles involved in the crash received medical treatment for “allegedly minor injuries,” according to a mandatory report filed by Cruise with the California Department of Motor Vehicles.

According to the report, filed by Cruise Vice President of Global Markets Todd Brugger, a Toyota Prius entered an intersection after traveling straight via a lane designated for turning. The Cruise vehicle was attempting to make a left-hand turn across several lanes of traffic and had stopped to allow the car to turn.

The Prius was traveling about 40 mph in a 20 mph speed zone when it struck the Cruise vehicle, according to the filing. The Cruise vehicle was in “autonomous mode” at the time of the crash. It’s unclear if a safety driver, employee or other passenger was in the car.

The NHTSA, part of the Department of Transportation, confirmed the investigation but declined to offer other details.

Cruise, in an emailed statement, said the company has provided NHTSA with “routine information” about the crash. The company also noted that the inquiries from the Special Crash Investigation team are separate from the agency opening an official defect probe into the company or its vehicles.

“NHTSA has not opened a formal investigation into Cruise for this or any other incident,” Cruise said. “Any suggestion to the contrary is absolutely inaccurate. An office within the agency has collected routine information, which we have provided.”

Separately on Thursday, the NHTSA opened another investigation into a fatal pedestrian crash in California involving a 2018 Tesla Model 3. It adds to more than 30 other probes into Tesla vehicles since 2016 in which advanced driver assistance systems like Autopilot were a suspected factor.

Tesla crashes currently under investigation have resulted in 16 fatalities of vehicle occupants or pedestrians, according to the agency.

Uber Freight cuts 150 jobs, about 3% of the unit’s head count