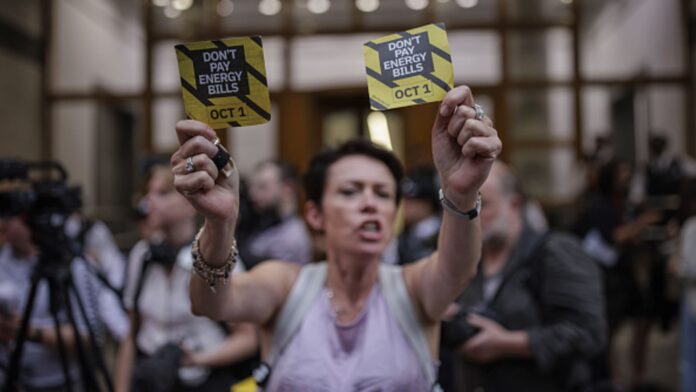 The U.K.’s Don’t Pay movement is aiming to amass 1 million supporters who will cancel their direct debit payments to energy companies in October as bills soar.

LONDON — A petition to boycott energy bill payments is gaining traction in the U.K. as the country faces its worst cost-of-living crisis in a generation.

As of Tuesday, the grassroots Don’t Pay movement had racked up more than 170,000 signatories who have pledged to cancel their direct debit payments to energy companies on Oct. 1, when household bills are set to skyrocket.

Campaign organizers say supporters will enact their pledge if a total of 1 million signatures are amassed before the October deadline.

The government has dubbed the movement irresponsible, warning that it could cost consumers even more money in late payments.

The Don’t Pay movement did not immediately respond to CNBC’s request for comment. However, in a statement on its website, it said that the campaign is designed to gain temporary “leverage” and encourage government support. It also said that people on prepayment meters should not take part as their power supplies could be cut.

Britain’s energy regulator Ofgem announced last month that it would raise its main cap on domestic energy bills by 80% from October, taking the average annual household payment to £3,549 ($4,197) from £1,971.

Consumer rights activists have warned that the surge will leave millions of Britons unable to pay their gas and electricity bills this winter, with the most vulnerable set to be worst affected.

U.K. energy bills are set to rise by 80% in October with analysts expecting further hikes in early 2023.

The End Fuel Poverty Coalition estimates that this year 12 million households (42%) in Britain will face fuel poverty, broadly defined as the inability to adequately heat or cool their homes.

“The public is clamoring to be kept warm this winter and we need to see more emergency money for people this winter, funding to help everyone cut their bills with better insulation, and a rapid move away from expensive gas and onto cheaper, renewable energy,” a spokesperson for the End Fuel Poverty Coalition said.

“Without urgent government action, the impact of rising levels of fuel poverty on our nation will be profound and devastating,”

In the hours following Truss’ victory Monday, signatories to the Don’t Pay campaign ticked up by around 10,000.

The government previously announced a £15 billion package of measures in May, including a £400 discount on all energy bills. However, activists have argued that more support is needed as prices continue to rise.

Truss, for her part, has said she will announce new support within a week of taking office, though, until now, she has been scant on details. Reports following her appointment Monday suggest that the measures could be worth up to £100 billion, including freezing the price cap for average households at £1,971.

Market analysts say that could go some way to easing bill payments for Britons this winter, while also potentially helping to curb the U.K.’s sky-high 10.1% rate of inflation.

“Such a price freeze would make a major difference to inflation,” Holger Schmieding, chief economist at Berenberg Bank, wrote in a research note Tuesday, predicting that it could lower inflation by 3% in the fourth quarter of 2022.

However, he added that any major handouts could see price pressures continue to lift modestly “for a long time thereafter.”