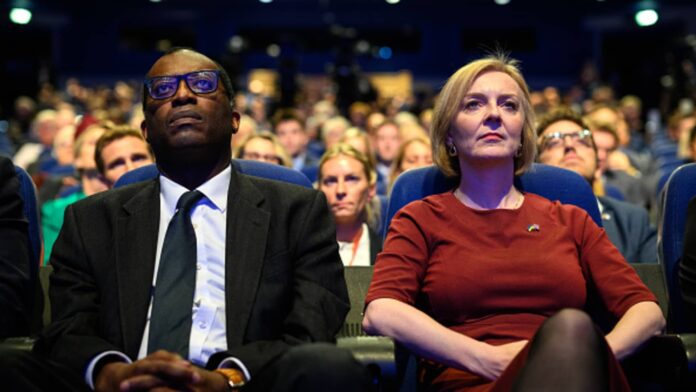 Finance Minister Kwasi Kwarteng on Monday morning confirmed that the government would be scrapping its plans to cut tax for the country’s highest earners.

U.K. Finance Minister Kwasi Kwarteng on Monday said the government would not be distracted from delivering on its growth plan, shortly after the government dramatically abandoned its intention to cut income tax for the country’s highest earners.

“What a day,” Kwarteng said as he addressed attendees at the Conservative Party’s annual fall conference in the central England city of Birmingham.

The fourth quarter starts now, and it’s not looking good for the economy

“It has been tough. But we need to focus on the job in hand. We need to move forward, no more distractions,” he continued. “We have a plan, and we need to get on and deliver it. That’s what the public expects from the government.”

Earlier in the day, the U.K. government reversed a plan to scrap the top 45% rate of income tax paid on earnings above £150,000 ($166,770) a year following a growing public backlash and major market turbulence.

Alongside new Prime Minister Liz Truss, Kwarteng had spent the last 10 days defending the policy even as the British pound dropped to an all-time low, mortgage deals were pulled from the market and U.K. government bonds began to sell off at a historic rate.

“I can be frank, I know the plan put forward only 10 days ago has caused a little turbulence,” Kwarteng said. “I get it. I get it. We are listening and have listened — and now I want to focus on delivering the major parts of our growth package.”

The proposed tax cut was widely seen as a politically toxic decision at a time when the country faces a worsening cost-of-living crisis.

“We get it, and we have listened,” Kwarteng said in a statement Monday morning.

Speaking to the BBC on Sunday, Truss defended the unfunded measures in the government’s so-called mini-budget but acknowledged she could have “done a better job laying the ground” for the announcements.

Economists and analysts were skeptical that the U.K. government’s U-turn on tax cuts for the wealthy would alleviate market skittishness, however, noting it only accounts for a small part of the equation in terms of the broader spending plans.

how Emirates is wooing luxury travelers