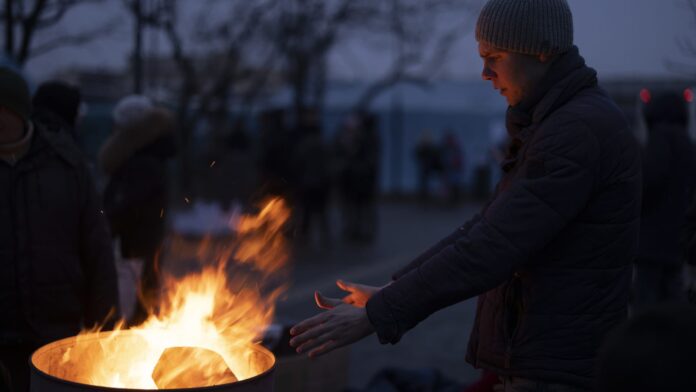 People keep warm by fires outside the main rail terminal in Lviv, Ukraine.

Over 10 million Ukrainians have fled the country since the start of the war, but many of those who stayed — particularly in the south and east of the country — have already been pushed to the limits of their resilience.

Daily life has become a test of survival for many, with basic necessities such as water, food and medical provisions becoming scarce. Russia has also continued to pound the country’s energy infrastructure; around 10 million people in Ukraine currently have no power as a result of Russian strikes on energy facilities over recent weeks.

As winter sets in — with dwindling daylight hours and temperatures set to plummet as low -20 degrees Celsius (-4 degrees Fahrenheit) — officials are warning of widespread shortages of energy and heat.

Power has become particularly scarce, with energy use rationed and scheduled (and, lately, unscheduled) daily blackouts imposed in many parts of the country.

And those blackouts could last for months, according to one energy company CEO, who warned Monday evening that “there may be no light for a very long time.”

“I want everyone to understand: Ukrainians will most likely have to live in a shutdown mode until at least the end of March,” Serhiy Kovalenko, CEO at Ukrainian power provider Yasno, said on Facebook Monday.

Kherson residents collect water at a water point in the city that has had no electricity or water since the Russian retreat on November 16, 2022 in Kherson, Ukraine.

“There are also different forecasts of the development of this situation, and they completely depend on attacks Russia,” he said.

The best-case scenario is no new attacks on the power grid. There would still be power outages, but only short-term ones, enabling energy workers get the grid back on its feet. However a worst-case scenario, according to Kovalenko, would see the network “severely damaged.”

“Then you will have to activate not only hourly stabilization outages, but also emergency ones, for which there may be no light for a very long time,” he added.

Ukraine should be prepared for different eventualities, particularly the worst-case scenario, he said, advising people to stock up on warm clothes and blankets.

“Think about options that will help you wait through a long outage. It’s better to do it now than to be miserable and blame someone later. More to the point, we all know who is really to blame,” he said.

The World Health Organization has expressed concerns over deteriorating living conditions in Ukraine, with the global health agency forecasting that up to three million more people could try to leave the country this winter in search of warmth and safety.

Dr. Hans Kluge, WHO’s Regional Director for Europe, warned Monday that “this winter will be about survival” and “life-threatening for millions of people in Ukraine.”

In a statement, Kluge said continued attacks on health and energy infrastructure mean hundreds of hospitals and healthcare facilities are no longer fully operational and are lacking fuel, water and electricity to meet basic needs.

WHO said it had verified 703 attacks “on health” since the war began nine months ago, describing this as “a breach of international humanitarian law and the rules of war.”  Russia has long denied targeting civilian infrastructure, despite instances and evidence to the contrary.

Ukrainian emergency employees and volunteers carry an injured pregnant woman from a maternity hospital that was damaged by shelling in Mariupol, Ukraine, Wednesday, March 9, 2022.

The “devastating” energy crisis, as well as a deepening mental health emergency, constraints on humanitarian access and the risk of viral infections will make this winter a formidable test for Ukraine, Kluge added, as well as testing the world’s commitment to support the country.

“Many will be forced to turn to alternative heating methods like burning charcoal or wood or using generators fueled by diesel or electric heaters. These bring health risks, including exposure to toxic substances that are harmful for children, older people and those with respiratory and cardiovascular conditions, as well as accidental burns and injuries,” he said.

Ukrainian officials in parts of the country most badly affected by power shortages are warning residents of a harsh winter ahead. Civilians in recently liberated parts of Kherson, in southern Ukraine, are being told to leave for safer regions over winter, while Kyiv’s mayor has also reluctantly floated the possibility of evacuations.

Ukraine’s President Volodymyr Zelenskyy noted in his address Monday evening that during the day, “energy workers had to apply not only stabilizing shutdowns, but also unscheduled ones. This is caused by a higher level of consumption than the country can provide at this time.”

Residents talk with train station staff while waiting to be evacuated from Kherson on Nov. 21, 2022 in Kherson, Ukraine. The recently de-occupied city of Kherson is feeling power and water shortages acutely.

“Of course, energy workers, utility workers, rescuers and everyone involved are working at their maximum. But the systemic damage to our energy sphere by the attacks of Russian terrorists is so significant that all our people and businesses should be very frugal and spread consumption by hours of the day,” he said.

As of Monday evening, Zelenskyy said the situation was particularly difficult in the capital Kyiv and surrounding region, as well as in the Vinnytsia, Sumy, Ternopil, Cherkasy, Odesa regions and some other cities and districts.