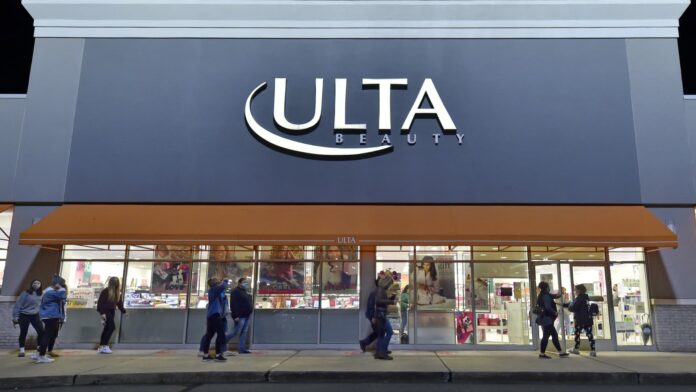 Shoppers line up outside of Ulta Beauty before the 6am opening on Black Friday.

Ulta Beauty on Thursday boosted its outlook and surpassed Wall Street’s expectations for quarterly earnings and sales, as shoppers kept replenishing their makeup bags even while paying more at the grocery store.

CEO Dave Kimbell said as shoppers weigh their purchasing decisions and face rising prices, they are still choosing to spend on beauty. On a call with investors, he said customer spending went up across all income levels.

“While it’s hard to know with certainty if we are starting to see consumers trade down — as the only beauty retailer that offers a wide variety of prices from entry-level mass to high-end luxury and everything in between, Ulta Beauty is uniquely positioned to capture any consumer shifts within price points in the beauty category,” he said.

Here’s how the company did in the three-month period ended Oct. 29, compared with Refinitiv consensus estimates:

As shoppers pick where to splurge and where to cut back, beauty has jumped out as a more resilient category. Target, for example, called out the category as a bright spot even as it disappointed on third-quarter earnings and cut its holiday-quarter outlook. Many of its big-box stores have a mini Ulta shop inside. Kohl’s, which pulled its full-year forecast, also said beauty is driving sales. It has mini Sephora shops inside of its stores.

At Ulta, comparable sales soared by 14.6% year over year. That growth comes on top of a 25.8% jump in the year-ago period and far surpasses the 8.8% increase that analysts expected for the third quarter, according to StreetAccount.

Kimbell said makeup, skincare, hair care and the fragrance and bath category all delivered double-digit comparable sales growth year over year. He said shoppers snapped up foundation, concealers and blushes in its makeup category. They restocked skincare products to keep up their routines, and they tried newer brands and bought holiday fragrance gift sets early.

The increased guidance also topped Wall Street expectations: Analysts had been looking for full-year projections of $21.40 earnings per share and $9.77 billion in revenue.

The retailer is estimating for the full year its comparable sales will come in 12.6% to 13.2% higher than the year-ago period, versus a prior forecast of 9.5% to 10.5% growth.

Along with seeing growing sales, the company said its strong third quarter was also due in part to selling products at a higher price point.

Ulta reported a profit margin of 41.2%, significantly above the 39.6% it reported in the year-ago period and the 39.3% that analysts had forecast, according to StreetAccount estimates.

Ulta is geared up for the holiday season, a time when shoppers turn to its stores to get ready for parties and to look for gifts. So far, Chief Financial Officer Scott Settersten said, the retailer is pleased with trends it saw during Thanksgiving weekend, including Cyber Monday.

He acknowledged, however, that the company still has key sales weeks ahead. He said its fourth-quarter outlook factors in “the expected resilience of the beauty category as well as potential risks
from shifts in consumer spending, increased points of distribution for prestige beauty and higher promotional activity.”

Shares of the company touched a 52-week high and closed at $472.53, bringing the company’s market value to about $24 billion.

Man in custody after ex-NY mayor Giuliani ‘slapped’ on back, police say