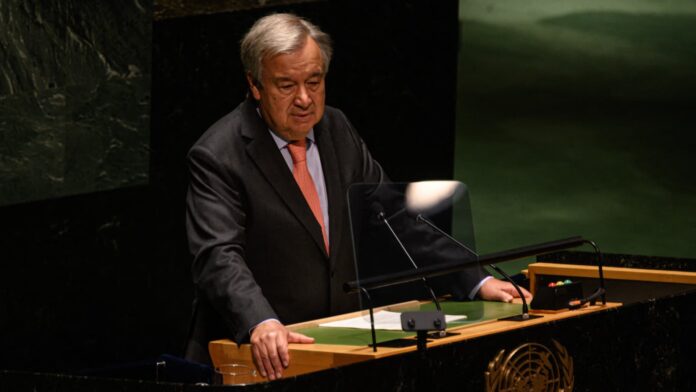 United Nations Secretary General Antonio Guterres speaks during the 2022 Review Conference of the Parties to the Treaty on the Non-Proliferation of Nuclear Weapons at the United Nations in New York City on August 1, 2022.

WASHINGTON — United Nations Secretary-General Antonio Guterres urged governments on Wednesday to tax excessive oil and gas profits as the world grapples with an energy crisis triggered in part, by Russia’s war in Ukraine.

“It is immoral for oil and gas companies to be making record profits from this energy crisis on the backs of the poorest people and communities,” Guterres said in a speech before the international forum.

He added that the funds, which equate to $100 billion in the first quarter of this year should instead be used to support vulnerable communities.

“This grotesque greed is punishing the poorest and most vulnerable people while destroying our only home,” Guterres said, calling for governments to also address the mounting climate crisis.

He also urged governments to ramp up and diversify supply chains for raw materials and renewable energy technologies while eliminating bureaucratic red tape around the energy transition.

“Every country is part of this energy crisis,” Guterres said.

He also said that the consequences of the Kremlin’s war have extended beyond a budding energy crisis and have also exacerbated global food insecurity and crippling debt around the world, but specifically in developing nations.

“Many developing countries drowning in debt, without access to finance and struggling to recover from the COVID-19 pandemic could go over the brink, Guterres warned. “We are already seeing the warning signs of a wave of economic, social and political upheaval that would leave no country untouched,” he added.

The U.N. chief announced the establishment of the Global Crisis Response Group aimed at coordinating global solutions to the triple crisis of food, energy and finance.

Guterres’ comments come as the first vessel carrying Ukrainian agricultural goods departs from the Black Sea, a significant step in addressing the mounting food crisis provoked by Russia’s naval blockade of Ukrainian ports sprinkled along the Sea of Azov and the Black Sea.

In July, representatives from the U.N., Turkey, Russia and Ukraine signed an agreement to reopen three Ukrainian ports, an apparent breakthrough as the Kremlin’s war on its ex-Soviet neighbor marched into its fifth month.

Less than 24 hours after the deal was signed though, Russian missiles rained down on Odesa, Ukraine’s largest port. World leaders swiftly condemned the Kremlin’s missile strike on Odesa, another anxious turn in fruitless efforts to mitigate a mounting global food crisis.

Kubrakov also said that 16 ships are ready to go, but that only three vessels will leave the port each day for the next two weeks. He added that in the next two months, Ukraine hopes to export up to 3 million tons of grain and other agricultural goods by sea per month.