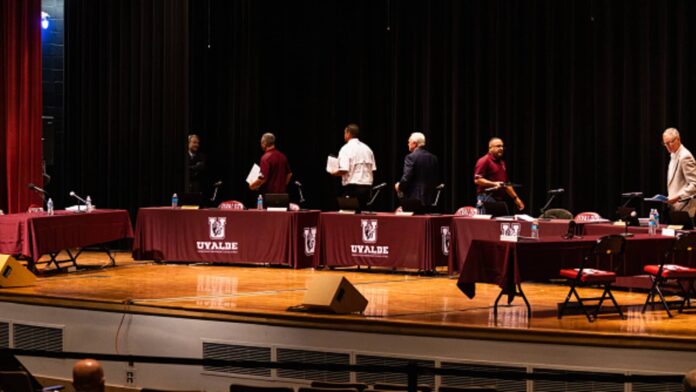 His removal caps off three months of outrage over the botched law enforcement response to a deadly shooting at Robb Elementary School that killed 19 children and two teachers.

One hour, 14 minutes and 8 seconds passed from the time police entered the building May 24 until the gunman was killed, Texas Department of Public Safety Director Steve McCraw has said.

Arredondo did not attend the special school board meeting Wednesday that was called to address his employment. In a statement, his lawyer said Arredondo has faced death threats and did not believe the meeting was safe.

The lawyer, George Hyde, said it was “beyond any doubt that discharge from public employment under circumstances that put the employee’s reputation, honor or integrity at stake gives rise to a liberty interest” under the Constitution’s equal protection clause.

Hyde said that a person in those circumstances is entitled to a procedural opportunity to clear their name.

Hyde also portrayed Arredondo as a victim of those affected by the May 24 massacre. Instead of being able to lash out at the gunman, who was fatally shot by police, they sought “more retribution by identifying a new target to focus their grief on, with the belief that it will help them stop hurting,” he said.

“Unfortunately, it won’t,” Hyde said. “Retribution will not bring anyone back; it is a hollow reward, and it will only spread more hurt and pain in an unjust and biased manner.”

It says that under the district’s active shooter plan, Arredondo would have been the incident commander, but he “did not assume his preassigned responsibility of incident command.” Arredondo has said he did not consider himself to be the officer in charge.

McCraw has described the police response as an “abject failure.”

Arredondo, who has mostly kept a low profile and avoided media questions, told The Texas Tribune in June that officers never “hesitated, even for a moment, to put themselves at risk.”

Arredondo, who took over as police chief for the Uvalde school district in 2020, also told the Tribune he considered himself a front-line responder — not the person managing the broader response.

Arredondo resigned from the Uvalde City Council on July 2. He was elected to that position just weeks before the elementary school shooting.

Angry and heartbroken parents expressed their outrage to the school board last month, calling for the school superintendent to be fired and for trustees to step down.

Some repeated their calls again for Arredondo to be fired. He was placed on paid administrative leave in June.

The superintendent of the school district had previously said it would wait until the investigation into the May 24 massacre was complete before it made personnel decisions.

State officials, as well as Texas Gov. Greg Abbott, have been criticized over the law enforcement response and a changing narrative after the killings.

Abbott and other officials initially said a school resource officer confronted the killer as he entered the campus, which was not true and was later retracted.

The timeline and narrative of what occurred as described by officials also changed after the shooting. Abbott has said he was misled.

Google will delete location history for visits to abortion clinics