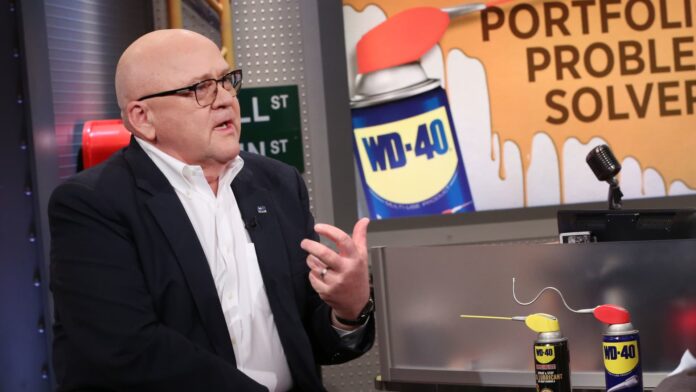 WD-40 ‘s latest earnings release could be read as a sign of what’s to come as U.S. companies grapple with high inflation, an uncertain economic landscape and a strengthening dollar. Earnings for the maker of the famous lubricant and other industrial products fell short of analyst expectations. Total net sales in the third quarter were 9% lower on the year and net income slumped 15% from the previous year and 31% from the previous quarter to $14.5 million. At the same time, gross margin came under pressure. “Unfortunately, we continue to face a challenging inflationary environment and our third quarter gross margin came in at 48%, reflecting significant increases to our cost of products sold,” CEO Gary Ridge said on a call with analysts. He added that inflationary pressures are broad-based, continuing and the company sees little sign of relief in the near-term. The company’s stock plunged more than 12% Friday and is down about 16% year-to-date through Thursday’s $204.85 close. D.A. Davidson lowered its price target for the stock on Thursday to $169 from $172 and cut its earnings-per-share estimates for the year following the company’s report. It maintained a neutral rating on WD-40. China, inflation and currency WD-40 cited a few significant events that added downward pressure to their quarter that will likely weigh on other companies as well. Lockdowns to combat Covid-19 in Shanghai and military action by Russia in the war with Ukraine hit supply, demand and sales numbers – the company saw a 21% decrease in European sales, in part due to suspending sales in Russia. In addition, inflation and fluctuating oil prices have added to supply chain costs and weighed on margins for the company. To combat this, WD-40 is monitoring its supply chain and implementing strategic price increases. Still, the company doesn’t expect those price increases to show up in their financials right away. “They talked about margin compression. I think that’s going to be a big theme” this quarter, said Peter Boockvar, chief investment officer Bleakley Advisory Group. In the third quarter, WD-40 increased prices 25% in the U.S., Jay Rembolt, WD-40’s vice president of finance, treasurer and chief financial officer said on the Thursday earnings call. “The impact of that price increase will not flow into our financials until the fourth quarter,” he said, adding that the company is planning significant price increases in Europe this summer. WD-40 was also hurt by foreign exchange rates in the third quarter. The euro has slipped to a 20-year low against the U.S. dollar’s strength and is nearing parity – or a one-to-one exchange rate – with the currency. The dollar has also gained against the yen. These foreign exchange rates add pressure to companies with international sales exposure , as profits translated from euros or yen look smaller in dollars. Stocks with high exposures abroad have also generally underperformed their domestic-facing peers this year , according to an analysis by Goldman Sachs. Companies are likely to face similar pressures going forward as geopolitical and economic uncertainty is slated to persist. Even though Friday’s jobs report showed a solid labor market shaking off any hit of a recession in the near term, the Federal Reserve will continue to raise rates to combat high inflation. That will continue to boost the dollar against other currencies, potentially adding to foreign exchange rate pressure. And, even if the Fed can tame inflation in the U.S., companies with international sales exposure will still have to grapple with rising prices abroad as individual central banks make their own moves to raise rates. Next week, PepsiCo , Delta Air Lines and banks including JP Morgan Chase , Morgan Stanley , Wells Fargo and Citigroup all report earnings as the second-quarter earnings reporting season ramps up.