What are ghost guns? Dealers rush to sell untraceable firearms as crackdown nears 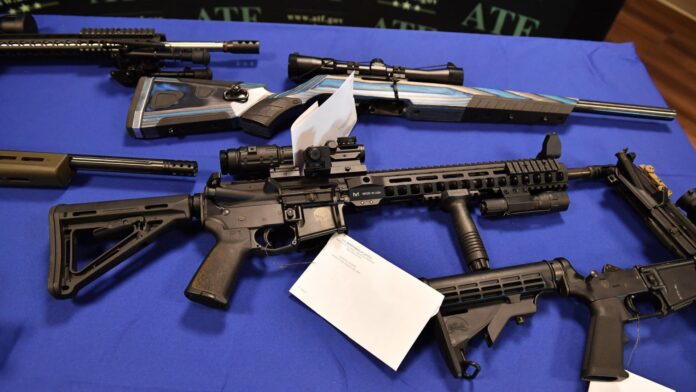 With new federal regulations set to take effect on so-called “ghost guns” next week, businesses that sell the untraceable firearms are racing to offload inventory.

The new regulations from the Biden administration are set to take effect Aug. 24 and will substantially curb the proliferation of ghost guns by requiring those who sell them to abide by the same rules and regulations as traditional gun sellers in the U.S.

The weapons are assembled from kits and do not carry serial numbers. Authorities say they attract criminals and extremists. Their parts can be bought online or at a store as do-it-yourself kits, and their purchase doesn’t require a background check. They can be assembled into working firearms in as little as 30 minutes.

A spokesperson for the federal Bureau of Alcohol, Tobacco, Firearms and Explosives said the new rule will “play a key role in preventing convicted felons, domestic abusers, and other prohibited persons from acquiring these firearms.” It will also allow the bureau “to trace these guns when used in crimes.”

Under the new regulations, manufacturers and dealers of ghost guns must be federally licensed, parts used to make the weapons will need serial numbers, and purchasers must undergo a background check.

With days until the rule takes effect, ghost gun dealers are ramping up efforts to offload inventory. Online dealer GhostGuns.com has a live countdown banner on its homepage reminding shoppers of the date the restrictions take effect. The company saw an uptick in sales for its ghost gun kits when the rule was first announced in early April, and it sold out of them, a representative told CNBC. The countdown is intended to “drive awareness and sales,” the representative said.

The site 80percentarms.com, which sells some firearms already 80% assembled, promises to continue with shipping ghost guns until the day the rule begins.

A similar online dealer, 80-lower.com, is advertising “fast shipping” on products “delivered in discreet boxes,” and a statement on their website says the company is “prepared to fight this final rule,” and that it’s been working with a legal team and other organizations to “block this rule from coming into effect.” The National Rifle Association, the country’s biggest pro-gun group, has criticized the ghost gun rule.

Representatives from 80percentarms.com and 80-lower.com did not immediately respond to CNBC’s request for comment.

Ten states and the District of Columbia have already begun regulating or outright banning the sale of ghost guns.

Polymer80 was found to have violated city consumer protection laws by falsely claiming that ghost gun kits were legal to purchase in D.C. The company sold them to dozens of customers in the city, including through its website. Polymer80 was ordered to pay more than $4 million in penalties to the city.

“These weapons are unlicensed, undetectable, and untraceable, and must be subject to regulation just like other guns,” Racine said in a statement to CNBC.

He also said he backs the new federal regulations.

“As the country and the District face a gun violence epidemic, we must support federal efforts to stem the flow of ghost guns, which can be easily trafficked across state borders,” Racine said. “Upholding this rule is critical in making sure that our residents are safe.”

Polymer80 did not respond to CNBC’s requests for comment on the lawsuit or the upcoming rule change.

While the new rule will regulate future sales of ghost guns, there is no known estimate of how many ghost guns are already in circulation.

Red Cross is blocked from prison where Ukrainian POWS died