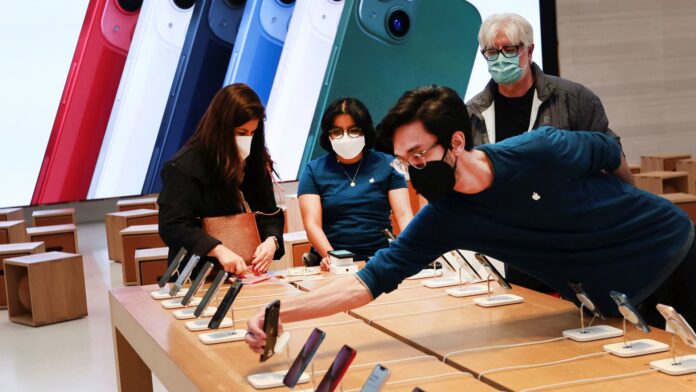 If history is any guide, don’t expect shares of Apple to sharply outperform the S & P 500 over the next three months, Bernstein says. The technology giant is slated to hold an event Wednesday where analysts widely expect the company to reveal new iPhone, Apple Watch, and AirPods models. “Historically, Apple’s stock does not react materially to iPhone announcements (given that there are typically no surprises), and performance has generally been fairly muted in the 3-months following iPhone announcements (typically mid-September to mid-November), as investors wait to gauge the strength of the iPhone cycle,” wrote Bernstein’s Toni Sacconaghi in a note to clients Tuesday. “We expect the same this year.” Despite the usual hype, the shares typically perform just about in-line with the market one month after the iPhone reveal, Bernstein data shows. And three months out, the shares are only slightly beating the market. It’s not until six months out when the stock typically returns to its market-beating ways. One reason for the meager post-launch performance is that the trade already occurred in the run-up to the event. Shares typically rise 13.9% percent more than the S & P 500 in the three months leading up to the launch. Over the last three months, the stock has outperformed the market by 11.5%. Bank of America’s Wamsi Mohan agreed in a note to clients that shares could decline slightly following the event, but typically recover within 30 to 60 days. This year, other factors, including surging inflation, a strong dollar and ongoing supply chain issues are at play, which could weigh on Apple’s stock and results ahead, analysts said. Amid this backdrop, many analysts expect customers to pay more for some iPhones this year — or at least on Pro models. “While we think there will be some pressure, we believe the proliferation of installment plans will significantly lessen the impact as customers will only need to pay the equivalent of a few more dollars per month per device,” wrote Credit Suisse’s Shannon Cross. JPMorgan Chase expects price increases in the wearables market to more greatly impact investor sentiment, given their more discretionary nature, said analyst Samik Chatterjee in a recent note. Bernstein’s Sacconaghi also believes the addition of an extra week to Apple’s first fiscal quarter could impact results, given that the period between Christmas and New Year’s Eve adds 7% to 8% to revenues. “That said, Apple’s CY Q4/FY Q1 strength is always principally dictated by the strength of its iPhone cycle, which has varied widely over the years – if the iPhone 14 cycle is not strong, Apple’s December quarter could invariably be below average sequential Q4 to Q1 revenue growth (of ~50%), despite the extra week,” he wrote. Apple shares are off more 15% from their 52-week high and down about 13% since the start of the year. — CNBC’s Michael Bloom contributed reporting

Nike is a buy that’s poised for a comeback beyond 2022, Raymond James says

17 million in Europe got long Covid in first two years of pandemic: WHO