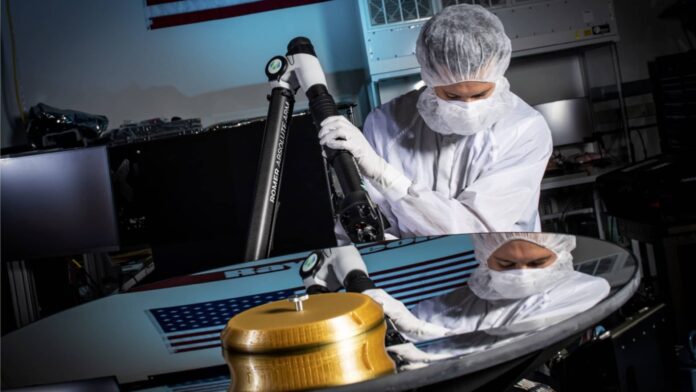 A close look at the primary mirror of a Worldview Legion satellite during assembly and inspection.

Space infrastructure and imagery company Maxar said Thursday the first launch of its key next-generation imagery satellites is set for the beginning of next year.

The company plans to deliver the first pair of WorldView Legion satellites in December, with the launch via SpaceX scheduled for January.

WorldView Legion is the company’s constellation of six imagery satellites and is key to the company continuing to win lucrative contracts from U.S. defense and intelligence agencies. But the first Legion launch has been pushed back multiple times, in part due to supply chain delays and testing issues.

Maxar said the satellites for the first launch have completed everything but final integration testing.

The update comes alongside Maxar’s third-quarter earnings report, in which the company delivered a profit of $110 million in adjusted EBITDA, down 2% from the same period a year prior, and little changed revenue of $436 million.

However, the company’s order backlog has grown significantly to nearly $3 billion, up 56% from the beginning of 2022.

5 things to know before the stock market opens Thursday, September 15

Elon Musk’s SpaceX could spin off Starlink in IPO by 2025: Analysts