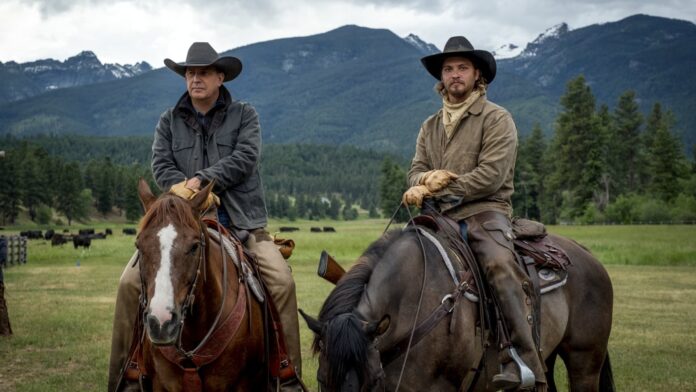 “Yellowstone” has become one of the hottest shows streaming. Filmed on location in the West, much of it in Montana, the scripted drama tells the story of a modern day ranch owner John Dutton, played by Kevin Costner, and his family dynasty.

The storyline is deliciously captivating, with back-stabbing and family intrigue, high stakes power plays and dramatic plot twists, but the cinematography is a major element of the appeal. Sweeping vistas, snow-capped mountains and charming small towns are captured throughout the episodes.

Still, ask native Montanans what they think of the show, though, and you’ll likely be met with grimaces and criticism.

Ginger Rice, a lifelong resident of the state, said she initially vowed not to watch the series after seeing just one episode.

“It’s unreal,” she said. “It doesn’t portray Bozeman or Montana life as far as I’m concerned.”

Yet Rice, who admits the show eventually sucked her in, also recognizes that the show makes her home state alluring to viewers: “Do you see what our state looks like? The mountains and prairies, and who can’t love this?”

The production itself has a significant economic impact on the state, according to a study by the University of Montana. When season four was shot on location last year, the production spent $72 million dollars in the state, with businesses in the state getting another $85 million economic boost. The study was funded, in part by Paramount, which owns the show.

That study did not quantify the impact of all the free advertising Montana gets from “Yellowstone.” But it’s clear the fictional John Dutton and his fictional sprawling ranch have given rich city slickers an idea of what it would be like to become a real-life baron of the Wild West.

A still from the TV series Yellowstone on Paramount Networks that is set in Montana.

As demand for land and homes has soared, prices have followed suit.

Around Bozeman, the median cost of a single-family home spiked from less than $500,000 before the pandemic to nearly $750,000 according to the Gallatin Association of Realtors. The areas around Missoula and Kalispell saw even more dramatic price increases. Rents are so high that even working professionals are having a tough time finding housing they can afford. And some landlords, seeking higher rents, aren’t renewing leases with tenants.

Big Sky Country’s population boom had been years in the making. Montana, the eighth smallest state by population, now has a population of more than 1.1 million people. From 2010 to 2020, the state grew 9.6% according to the U.S. Census Bureau.

Then came Covid and remote work. In 2021, Montana became one of the fastest growing locations in the nation, according to the U.S. Census Bureau.

“A lot of our clients during the pandemic, came out and found shelter at the ranches, a safe place to be and no people around,” says Tim Murphy, a longtime ranch broker from Bozeman and partner at Hall & Hall.

Last year, Chris Kimbrell, who had been living in Georgia, joined the mass migration to Montana, for a job as a veterinarian in Bozeman. From his very first visit as a 9-year-old, he said he was hooked on the state and kept making return trips for fly fishing through college.

But he carefully weighed the soaring cost of living.

“If it wasn’t for a family member who’s letting me live on his property, I would really have to think hard about moving out here,” Kimbrell said. “Rent and housing is becoming extremely expensive.” The support staff at his veterinary practice are being priced out of housing, he added.

Rice, the lifetime Montana resident, said her daughter and son-in-law were recently served notice that their landlord would not renew their lease in a three-bedroom home they’d rented for more than a decade. It was a mad scramble even to find a two-bedroom apartment at three times the rent they were paying, she said.

“My daughter says we’ll never be able to afford a house,” she said. “We tried to save but everything’s going up and up and up.”

Some families, even those with full-time employment, are moving into recreational vehicles or tents. The local roads are now scattered with people in campers who can no longer afford to pay rent or own a house. Habitat for Humanity calls it a housing crisis. “Montana has quickly become inaccessible to those who live and work here,” said the nonprofit, which is pushing lawmakers to prioritize housing affordability.

Longtime residents also criticize the cultural divide between newcomers and long-time Montanans. They frown on newcomers buying property but refusing to join in and commit to their communities.

She quietly complains that Bozeman is crammed with “highfalutin people” wearing posh attire who make her feel uncomfortable around them. And she says downtown has become nearly unrecognizable.

“I don’t like how busy it is. I don’t like the traffic. And it’s too expensive,” she said.

Longtime residents told CNBC the changes are obvious in Missoula and Kalispell, as well. Outsiders, they say, are always in a rush and too loud with their unrealistic demands. Rice said in her former job at a dry cleaner, a customer insisted on having paint splatters removed from designer jeans. “What were they doing painting in those pants anyway?” she wondered.

The “Yellowstone” effect reminds residents about another culture clash, which developed when Hollywood depicted Montana in the movie “A River Runs Through It.” The movie, which was directed by Robert Redford and featured an up-and-coming movie star named Brad Pitt, was filmed on location in 1991 and released in 1992. It won the Academy Award for Best Cinematography.

“At that point, fly fishing became in vogue,” ranch broker Murphy said, “as massive amounts of people wanted to buy fly fishing properties in the area.”

He’s seeing the surge again, he said, even as uncertainty clouds the economy. “When the stock market gets shaky and there’s turmoil, that just fuels our market because the land market is pretty stable,” he said.

Many of the newcomers arrive with deep pockets and entrepreneurial aspirations that fuel Montana’s growing economy. Gov. Greg Gianforte’s office said in May the state economy grew by 6.7% in 2021, the fastest pace in more than 40 years, making it the seventh-fastest growing state economy in the nation.

The Beartooth Group is betting that investors not only want a financial return but a legacy as well. The firm specializes in rehabilitating degraded land – such as old mines, feedlots or ranches – and then selling it.

Keith, the Beartooth founder, showed CNBC a creek that had been restored into a winding waterway, perfect for trout. Generations ago it had been forced into a ditch to be used for agricultural purposes. But now the fish draw birds. Ospreys built a nest and the parents were seen feeding their young.

That’s the kind of property that appeals to would-be buyers with notions about the wild spaces of Montana, Keith said. They want to see deer and bear and butterflies.

“I think we can all agree there aren’t enough dollars going into conservation,” he said. Wealthy, conservation-minded buyers often invest even more in restoring the land once they own a property. He said Beartooth’s pitch is unique: “By doing something good for the world, we’re making it more valuable financially and environmentally.”

The state is also hoping to draw former residents back to the Big Sky state with a marketing campaign, “Come Home Montana.”

“No matter how long you’ve been away, now is the time to come home to rural Montana,” the campaign says. “Embrace the life you truly want to live.”

But if you want to live there, bring your checkbook. Former residents will find their home state is far more expensive than when they left.