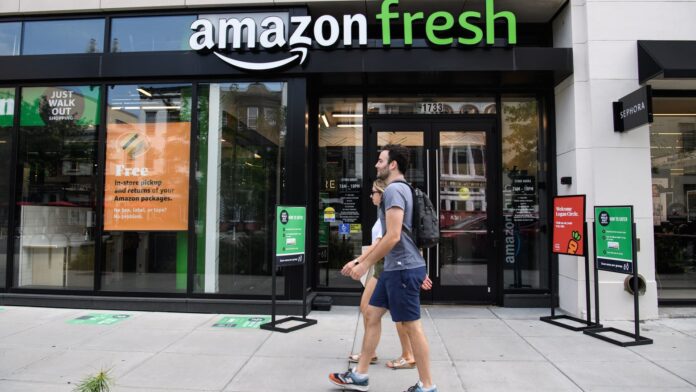 People walk past an Amazon Fresh store in Washington, DC, on August 26, 2021.

Herrington has served on the high-level S-team at Amazon since 2011 after initially joining the company in 2005. He started on the company’s consumables business then launched AmazonFresh in 2007 and began leading the North American consumer business in 2015, according to Amazon. Herrington developed and launched several key programs at Amazon, including its popular loyalty program for moms.

Herrington brought a deep expertise in grocery to Amazon. It’s an area the company has sought to aggressively expand into. Herrington, a former vice president at dot-com grocery flameout Webvan, helped Amazon gain ground in the space when he launched Amazon Fresh, its grocery delivery service, and Prime Pantry, another food delivery program that has since shuttered.

Herrington has become a key leader in the company. He’s part of Jassy’s S-Team, a tight-knight group of over a dozen senior executives from almost all areas of Amazon’s business, such as retail, cloud computing, advertising and operations.

Jassy said Amazon was changing the name of the Consumer business to Amazon Stores, adding that it would also bring the Operations group under a single leader, John Felton. Felton has also served on the S-team since 2020 and been at Amazon for 18 years.

Felton, who has served in a variety of operations and logistics leadership roles at Amazon, will report to Herrington under the new structure. Herrington’s other direct reports will include leads of Amazon’s physical, international and North American stores divisions, eCommerce Foundation, Pharmacy/AmazonCare/Healthcare, Selling Partner Services, Buy with Prime and Amazon’s chief economist.