HomeUSAAmerica's worst state for business is Mississippi. Here's why
USA 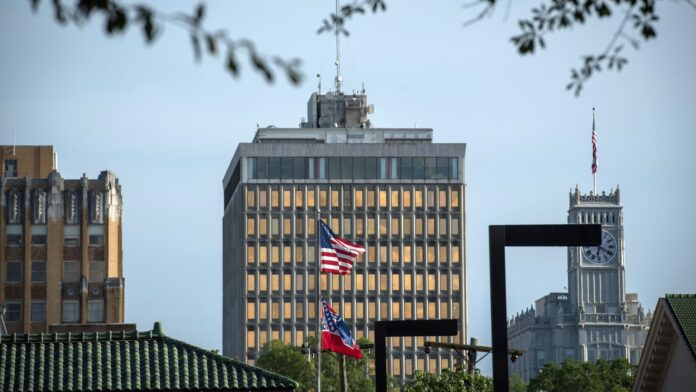 There may be no better place to beat inflation than Mississippi, which offers the lowest cost of living in the nation. But workers are not exactly beating their feet to get there.

With one of America’s least educated and least productive workforces, and one of the worst rates of worker migration, according to Census data, Mississippi finishes at the bottom of CNBC’s annual state competitiveness rankings.

Greg Howell, a manager at Magnolia Diesel in West Point, Mississippi, knows firsthand about the talent shortage in his state. He is searching for two diesel mechanics at his repair shop about 45 miles south of Tupelo. But he said the applications he is getting so far are not impressive.

The Mississippi state flag (bottom) waves in front of the city skyline in Jackson, Mississippi on June 28, 2020.

“You might let them air up your bicycle tire. But finding good quality people that want to work is just slim to none right now,” Howell said.

In Mississippi, the job of diesel mechanic pays, on average, about $22 per hour, according to the U.S. Bureau of Labor Statistics. But the higher the skills, the higher the wage. Still, there have been no takers for the Tupelo-area positions.

“A good mechanic is not looking for a job right now,” Howell said.

More coverage of the 2022 America’s Top States for Business

The situation for business owners is even worse when it comes to those looking for workers with advanced technical skills. Mississippi has the nation’s lowest concentration of so-called STEM — science, technology, engineering and math — workers. Only about 3% of Mississippi workers are employed in these high-demand fields, according to BLS data. Roughly 23% of Mississippi workers have a bachelor’s degree or higher, according to the Census Bureau, making the state’s workforce the nation’s second-least educated, ahead of only West Virginia.

All told, Mississippi’s workforce is also the nation’s least productive, as measured by economic output per job. It leaves the state ranked 47th in the Workforce category, the most important one in this year’s rankings as companies face historic worker shortages.

Improving the state’s workforce has been a priority of first-term Gov. Tate Reeves, a Republican. The state’s retooled workforce development agency, Accelerate Mississippi, has vowed to do so by seeking to better connect workers with employers.

“We were able to streamline our workforce development efforts to ensure we have a clear strategy — a strategy that will meet the needs of employers and fill the vacancies for jobs that offer above average wages,” Reeves said in the annual State of the State address in January.

The governor’s office did not respond to a request for comment after the rankings were released.

The program is showing results. Mississippi now has one of the nation’s best records in getting workers from its training programs into jobs, according to U.S. Labor Department data.

For his part, Howell does believe the state is doing all it can to develop and place workers, even helping to pay the salaries of trainees through a local community college.

“What that school’s doing, I think, is above and beyond,” he said. “I mean, they’re paying for the students to work here. I don’t know what else you’d ask a school to do.”

But, he said, the new hires don’t tend to stick around long, which he blames on “all that stimulus money.”

“Everybody’s done got used to that, and they don’t want to work now,” he said.

Regardless, Mississippi’s new successes in worker training are not making up for the many weaknesses in the state’s workforce, which Reeves acknowledged is a work in progress.

Mississippi also does poorly in the Education category, another Reeves priority, finishing No. 46. While test scores are improving, they remain low, according to U.S. Department of Education data. And the state lags in funding both K-12 and higher education.

Mississippi finishes dead last in Business Friendliness, thanks to a court system consistently ranked among the worst for business by the U.S. Chamber Institute for Legal Reform. In other categories, the state is No. 49 in Economy and No. 48 in Technology and Innovation.

This year’s worst-performing state offers a mixed bag in Life, Health & Inclusion, another important category in 2022 and a key factor in attracting workers.

Mississippi is one of only five states with no statewide anti-discrimination law protecting nondisabled people, according to the National Conference of State Legislatures.

Patricia Cole gets a shot of the Moderna Covid-19 vaccination from a medical worker at a pop-up clinic operated by Delta Health Center in this rural Delta community on April 27, 2021 in Hollandale, Mississippi.

In 2021, Reeves signed the Mississippi Fairness Act barring transgender girls from competing in school sports. The governor said the law was necessary to counter Biden administration policy that “encourages transgenderism amongst our young people.”

The National Center for Transgender Equality called the law “unjust and discriminatory.”

Mississippi’s voting laws are consistently among the most restrictive in the nation, according to researchers at Northern Illinois University. It is one of the only states not to allow early voting, and voters can cast absentee ballots in person before Election Day, but the practice is subject to heavy restrictions.

An anti-abortion protestor tries to talk to a patient on the other side of the fence outside of the Jackson Women’s Health Organization clinic, May 3, 2022.

A Mississippi ban on abortions after 15 weeks of pregnancy was the subject of the landmark Supreme Court decision in June overturning Roe v. Wade. Some groups have argued that state abortion bans are bad for business because they will deter workers. But because many state laws are still in flux, and the business community has yet to reach any sort of consensus on the issue, abortion laws are not considered in this year’s rankings.

Mississippi’s bright spot, year after year, is its low costs. And that fact is becoming more important as inflation soars.

The Magnolia State offers the lowest cost of living of any state, according to the Council for Community and Economic Research, which tracks prices nationwide. A four-bedroom, single family home in Jackson cost about $267,000 last year, researchers found. That is nearly 30% below the national average.

An abandoned home in Wisner, Mississippi.

And workers just got a big tax break. The state’s largest-ever tax cut started to phase in on July 1, the start of the new fiscal year. When it is fully implemented in three years, residents will pay a flat 4% tax on income above $4,000 per year.

For businesses, the state offers the nation’s lowest wage costs. The mean hourly wage was $20.53 last year, according to the Labor Department. And rent for office and industrial space is dirt cheap.

But with so many other weaknesses, however, it is fair to ask if you get what you pay for in America’s Bottom State for Business in 2022.

Where does your state rank? Check out the full list, and let us know what you think by posting on social media with the hashtag #TopStates.

Bitcoin jumps above $18,000 to highest level in a month