HomeUSAAtlanta Fed GDP tracker shows the U.S. economy is likely in a...
USA

Atlanta Fed GDP tracker shows the U.S. economy is likely in a recession 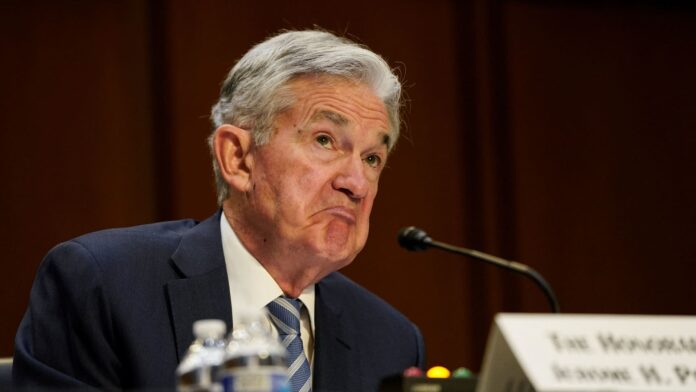 Federal Reserve Chair Jerome Powell reacts as he testifies before a Senate Banking, Housing, and Urban Affairs Committee hearing on the “Semiannual Monetary Policy Report to the Congress”, on Capitol Hill in Washington, D.C., U.S., June 22, 2022.

A Federal Reserve tracker of economic growth is pointing to an increased chance that the U.S. economy has entered a recession.

Most Wall Street economists have been pointing to an increased chance of negative growth ahead, but figure it won’t come until at least 2023.

However, the Atlanta Fed’s GDPNow measure, which tracks economic data in real time and adjusts continuously, sees second-quarter output contracting by 2.1%. Coupled with the first-quarter’s decline of 1.6%, that would fit the technical definition of recession.

“GDPNow has a strong track record, and the closer we get to July 28th’s release [of the initial Q2 GDP estimate] the more accurate it becomes,” wrote Nicholas Colas, co-founder of DataTrek Research.

The tracker took a fairly precipitous fall from its last estimate of 0.3% growth on June 27. Data this week showing further weakness in consumer spending and inflation-adjusted domestic investment prompted the cut that put the April-through-June period into negative territory.

One big change in the quarter has been rising interest rates. In an effort to curb surging inflation, the Fed has jacked up its benchmark borrowing rate by 1.5 percentage points since March, with more increases likely to come through the remainder of the year and perhaps into 2023.

Fed officials have expressed optimism that they’ll be able to tame inflation without sending the economy into recession. However, Chair Jerome Powell earlier this week said getting inflation down is the paramount job now.

At a panel discussion earlier this week presented by the European Union, Powell was asked what he would tell the American people about how long it will take for monetary policy to tackle the surging cost of living.

He said he would tell the public, “We fully understand and appreciate the pain people are going through dealing with higher inflation, that we have the tools to address that and the resolve to use them, and that we are committed to and will succeed in getting inflation down to 2%. The process is highly likely to involve some pain, but the worse pain would be from failing to address this high inflation and allowing it to become persistent.”

Whether that turns into recession is unknown. The National Bureau of Economic Research, the official arbiter of recessions and expansions, notes that two consecutive quarters of negative growth isn’t necessary for a recession to be declared. However, since World War II there never has been an instance where the U.S. contracted in consecutive quarters and was not in recession.

To be sure, this tracker can be volatile and swing with every data release. However, Colas noted that the GDPNow model gets more accurate as the quarter progresses.

“The model’s long-run track record is excellent,” he said. “Since the Atlanta Fed first started running the model in 2011, its average error has been just -0.3 points. From 2011 to 2019 (excluding the economic volatility around the pandemic), its tracking error averaged zero.”

He further noted that U.S. Treasury yields have taken note of the slower growth prospects, falling significantly over the past two weeks.

“Stocks have taken no comfort from the recent decline in yields because they see the same issue portrayed in the GDPNow data: a US economy that is rapidly cooling,” Colas added.

— This story has been updated to reflect a downward revision Friday afternoon from the Atlanta Fed.