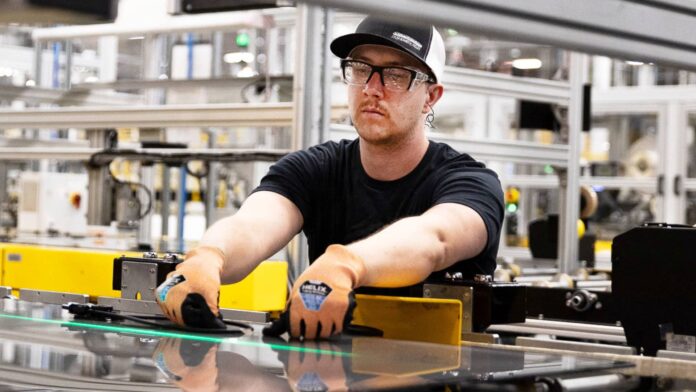 First Solar stock still has room to run even after advancing more than 60% this year, according to Bank of America. Analyst Julien Dumoulin-Smith raised his price objective on First Solar, and reiterated a buy rating on the Arizona-based company, after its latest earnings results. While First Solar’s third-quarter results missed profit and sales estimates, they nonetheless showed that the case for the solar company’s growth prospects remain intact, the analyst said. “While 3Q/FY22 earnings disappointed, we expected this and see a more positive inflection than currently appreciated by the Street, in our view, for 2023,” Dumoulin-Smith wrote in a Friday note. “All said, the 3Q update proved the dawn of a new U.S. solar panel supply backdrop, whereby Inflation Reduction Act (IRA) incentives and trade issues grant premium pricing to those manufacturers able to offer developers piece of mind over their long-term panel supply. We reiterate our Buy rating on FSLR, as we expect the latest pricing and demand to support significant core earnings growth through 2027+,” Dumoulin-Smith added. Some investors have expressed concern that growth expectations for First Solar may be overdone after the solar stock surged more than 60% this year. They argued the alternative energy equipment maker may not be able to compete with Chinese solar companies should there be an improvement in U.S./China trade relations, or increased Chinese investment in the U.S. Still, Bank of America remains bullish on First Solar, as it is “almost fully booked through 2026,” and expands its “competitive positioning” overseas. Dumoulin-Smith raised his price target to $165, up from $138, representing roughly 24.4% upside from Friday’s closing price of $132.67. The stock is up almost 11% during Monday trading. Additionally, the analyst said First Solar may not need to raise new equity for a $1.5 billion investment to build out its U.S. capacity. First Solar can use customer prepayments and annual cash flow to make up any shortfall, according to the note. “While we expect FSLR to receive billions in cash value from production tax credits (PTCs), the PTCs are unlikely to hit FSLR’s balance sheet until 2024, at the earliest. Therefore, a financing gap exists between the receipt of tax credits and FSLR’s 2023/2024 capex spend to support 4.4 GW of capacity expansion and the latest Ohio R & D center,” the analyst said. Customer prepayments and roughly $1.8 billion in net cash at the end of 2022, plus the annual cash flow from operations, however, mean that First Solar won’t “need to raise new equity to fund near-term capex. If anything, we expect FSLR to leverage bridge financing to ensure near-term liquidity, which FSLR will pay down following PTC receipt. This is an underappreciated, positive differentiation factor,” Bank of America said. — CNBC’s Michael Bloom contributed to this report.

Ukraine security guarantees will not be same as for NATO member, Scholz says