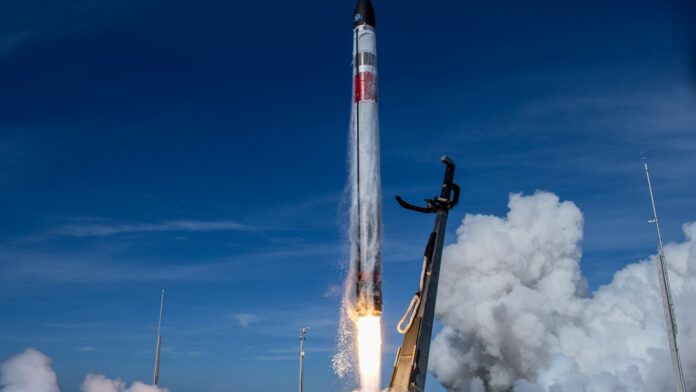 Wells Fargo named space companies Maxar Technologies and Rocket Lab as two stocks investors should buy in the evolving industry. The firm’s Matthew Akers began coverage of both stocks with overweight ratings, highlighting the companies as standouts in the pure-play space sector – with several having recently gone public amid the SPAC boom, only to see valuations slashed over the past year . Virgin Galactic Holdings, arguably the best known name in the group, was rated a new underweight, with Akers giving it in an initial price target of $4, or 36% below Friday’s close. Maxar Akers gave Maxar stock a $39 price target, 55% above its latest close, calling the company an “established leader in satellite earth imaging, with potential upside in space infrastructure.” Maxar’s recent NRO contract win, worth up to $3.2 billion , “de-risks” the company’s satellite imagery business, Akers wrote. Despite delays to the launch of its WorldView Legion satellites, Akers says Maxar’s more advanced spacecraft will “provide a catalyst and further expand its lead” in the market for high-resolution imagery. Akers noted “increased competition” from other satellite imagery companies like Planet Labs and BlackSky , but thinks the NRO deal shows Maxar “can hold onto the leading market share position.” Rocket Lab Akers began coverage of small satellite specialist Rocket Lab with a $5 price target, or 20% above the stock’s current price. The company builds both small rockets and satellites, and is an “an early leader” that has “a more achievable growth forecast than its peers.” “We think valuation is still settling out following the 2020-21 SPAC boom, while its long-term outlook for 30%+ margins remains to be proven,” Akers said. The company’s Electron series of rockets represent the second-most active U.S. launch vehicle, behind SpaceX’s Falcon 9 rockets, and Rocket Lab is building out a space services business that “could eventually provide upside.” “RKLB has indicated it will ultimately grow into space-based services, vertically integrating from satellite production and launch to services it will sell to end customers,” Akers wrote. While Rocket Lab “is still a few years out” from breaking even on cashflow, Wells expects the company will reach that benchmark “sooner than many” of its peers in the group of recently-public space stocks. – CNBC’s Michael Bloom contributed to this report.