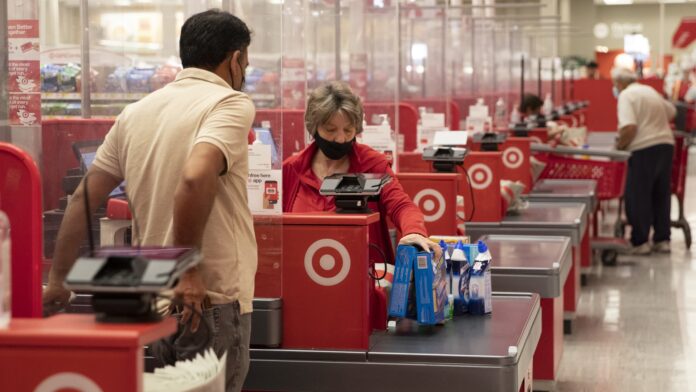 If the signals you’re getting about the U.S. consumer seem mixed, there could be a very good reason for that: They are. In recent earnings conference calls, CEOs have been presenting more evidence that consumer spending patterns are bifurcating. Despite rampant inflation, the high-end consumer is remaining strong, but the low-end consumer is starting to buckle under the pressure. The result is that lower-income shoppers are being more cost conscious when they spend their money. The high-end consumer Look what was just said just a short time ago. Luxury goods retailer LVMH CFO Jean Jacques Guiony said “sales volumes show no pushback from customers against higher prices.” That comment came after the company, which owns brands such as Louis Vuitton and Tiffany, reported earnings Tuesday. For the first six months of the year, sales are up 28% year-over-year, and profits jumped 34%. The airlines have all talked about strength in ticket sales for premium class cabins in their earnings reports this month. One example: Delta Air Lines commented, “Premium product revenue recovery outpaced main cabin across all markets.” Notably, Delta’s premium product ticket revenue exceeded 2019 levels in a quarter for the first time since the pandemic began. In June, Kroger CEO Rodney McMullen remarked on his earnings call, “Many customers continue to shop premium products throughout the store.” Last month, Darden Restaurants reported super-strong same-store sales growth at its Longhorn Steakhouse chain and its fine dining restaurants, Eddie V’s and The Capital Grille. At the same time, comparable-sales growth at its more moderately priced Olive Garden chain missed expectations . CEO Rick Cardenas told analysts, “Our data indicates that the higher-end consumer hasn’t seen the same impact as consumers at the lower end of the spectrum.” Chipotle Mexican Grill also saw a split among its customers in the latest quarter. On Tuesday, the company reported better-than-expected profit growth as price increases on its menu helped offset rising costs. More price hikes are coming next month, but the burrito chain said it isn’t fretting about pushback. “The majority of our customers are a higher household income consumer, and we’ve seen their frequency increase, and potentially not experience some trade-down,” an executive said on its earnings call. However, the company added, “Some low-income consumers [are] starting to slow down on purchase frequency.” The lower-end consumer It’s a different situation at the other end of the spectrum, though. Walmart , which gears itself to a more price-sensitive customer, issued a rare profit warning late Monday, and its stock has been tumbling ever since. The retailer expects higher prices to drive sales gains, but consumers are sticking to lower-margin grocery items, so profits are expected to decline. Walmart said inflation is “affecting customers’ ability to spend on general merchandise categories and requiring more markdowns to move through the inventory, particularly apparel.” Target echoed similar sentiments in June — and it’s resorting to more price cuts . Continuing on the retail front, there were also early warning signs about the lower-end consumer from discounter Five Below and teen retailer Zumiez . Early last month, Five Below CEO Joel Anderson said “sales were softer than expected” and the company offered an earnings and revenue forecast for the current quarter that was awful, coming in well below Wall Street estimates. Meanwhile, at the start of June, Zumiez CEO Rick Brooks said the company was being hurt by “inflation and overall competition for the discretionary dollar.” As CNBC’s Kate Rogers reported from the McDonald’s call Tuesday morning, some customers are spending less at the burger chain . “We are seeing some trade-down. We’re seeing customers — specifically lower income customers — trade down to value offerings and fewer combo meals,” McDonald’s CFO Kevin Ozan said. Also on the dining front, last month, Darden’s Cardenas pointed out that “consumers at the lower end, especially at [more value-oriented] Cheddar’s have shown signs of ‘check management.’… So the impact that inflation is having on that lower-end consumer is showing a little bit.” At AutoNation , CEO Mike Manley told Reuters in an interview, overall demand was still strong, but there was “some weakening” in the desire for used cars in the lower $20,000 to $25,000 price range. And finally at Kroger, back in June, McMullen said, “For other customers, whose budgets are more directly impacted by food and fuel inflation, they are actively looking for ways to save.”