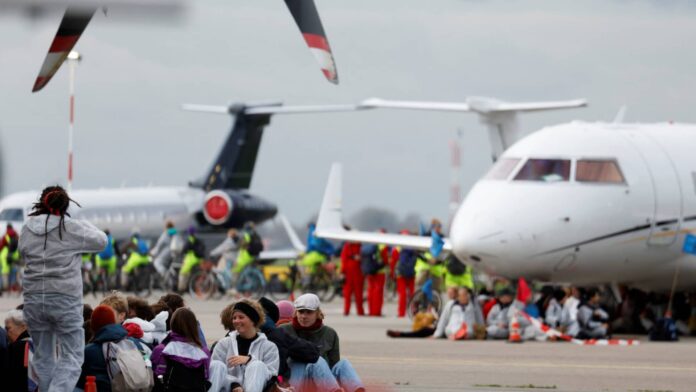 Hundreds of climate activists swarmed a private jet section of Amsterdam’s Schiphol Airport on Saturday as part of a day of demonstrations in and around the airport.

The activists stopped several aircraft from taking off by sitting in front of their wheels. Commercial flights were not delayed as of early afternoon. The environmental groups Greenpeace and Extinction Rebellion organized the demonstrations to protest the aviation industry’s pollution and greenhouse gas emissions, as well as local noise pollution, according to the organizations.

Demonstrators also protested in the airport’s main hall and carried signs that read “Restrict Aviation” and “More Trains,” according to a Reuters report. Military police said in a statement that they had detained several “persons who were on airport property without being allowed.”

“We’ve been campaigning to stop Schiphol’s large-scale pollution for years, and with good reason. The airport should be reducing its flight movements, but instead it’s building a brand new terminal. The wealthy elite are using more private jets than ever, which is the most polluting way to fly,” Dewi Zloch of Greenpeace Netherlands said in a statement.

Greenpeace said Schiphol is the largest source of carbon dioxide emissions in the Netherlands, reportedly emitting more than 12 billion kilograms annually. The airport responded to the climate demonstrations by saying it will aim to become emissions-free by 2030 and that it supports targets for the entire industry to reach net zero emissions by 2050.

Schiphol CEO Ruud Sondag said in a statement that he has been committed to a sustainable Netherlands for 25 years, and that he shares the activists’ sense of urgency.

“As an aviation sector, we must do everything we can to become quieter and cleaner. That’s my view. The task is immense, but achievable,” he said according to a translation of the statement. Sondag said he plans to talk to Greenpeace, employees, trade unions and others in the coming days.

“And for Saturday,” he said, “be welcome, but keep it tidy.”

The Dutch government is reportedly considering whether to include private jet traffic in its climate policy. The government in June announced a 440,000-person cap on annual passengers at the airport, citing air pollution and climate concerns.