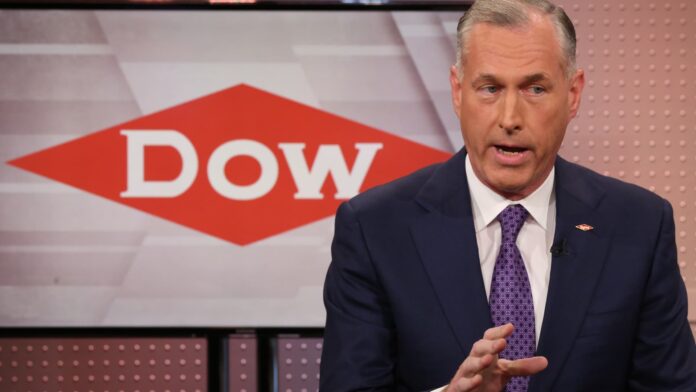 Shares of chemical maker Dow could be due for a rough landing as the economy normalizes after the pandemic shutdowns, according to Credit Suisse. Analyst John Roberts downgraded the stock to underperform from neutral, saying in a note to clients that Dow’s valuation looks pricy amid potentially unsustainable results. “We remain concerned that US basic chemical producers are overearning, just as there appears to be a consumer shift away from goods to services,” Roberts wrote. In addition to the increased demand for goods, the rise in energy prices has also been a positive for Dow, Credit Suisse said, as it gives a comparative advantage to U.S.-based producers. Those factors have the potential to reverse in the coming years, but that is not reflected in forward estimates for Dow, according to Credit Suisse. “Returns were 10-12% immediately pre-pandemic, which we consider a period of relative ‘normality.’ … Recent returns have been over 20% and have only come down modestly in the current quarter. And we believe estimated returns for the next several years remain above ‘normal,'” Roberts wrote. Based on the hypothetical “normalized” earnings, Dow may be overvalue relative to its peers, Credit Suisse said. Dow’s stock is down about 3% year to date, easily outperforming the broader market. Credit Suisse cuts its price target on Dow to $49 per share from $67. The new target is more than 10% below where the stock closed on Wednesday. — CNBC’s Michael Bloom contributed to this report.

Mortgage rates fall sharply to under 7% after inflation eases