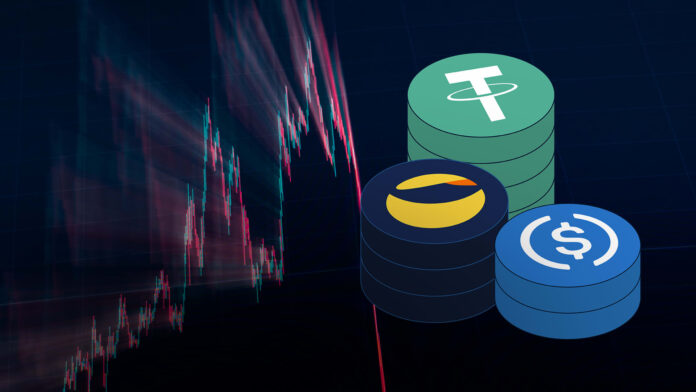 The logo of the cryptocurrency Terra Luna is seen on the screen of a computer in an office.

The cryptocurrency market fell on Tuesday amid rumors of insolvency at crypto exchange FTX and worries about the financial conditions of its sister company Alameda Research.

Crypto assets tied to Alameda, the trading company also owned by billionaire Sam Bankman-Fried, were suffering steeper losses. FTX Token (FTT), the native token of the FTX trading platform, has fallen 23% in the past 24 hours. The token tied to Ethereum competitor Solana, of which Alameda is a big backer, has lost 12%.

In crypto equities, Coinbase fell 12.5%, while Robinhood, in which SBF has a 7.6% stake, fell 9%. Crypto banks like Silvergate and Signature and bitcoin miners like Hut 8 and Riot Blockchain were down double digit percentages.

“There are a lot of mirrors to the Celsius and Three Arrows crisis that happened months ago and what you’re seeing is investors having deja vu and fear leaking into the markets,” said Conor Ryder, research analyst at Kaiko.

On Tuesday FTX halted withdrawals from its platform, after spooked investors attempted to pull their funds en masse. Investor confidence has been shaken after Binance founder Changpeng Zhao tweeted over the weekend that the company would sell its holdings of FTT. Binance is the largest crypto exchange in the world by trading volume and was an early backer of FTX.

Zhao said in his tweet that Binance has about $2.1 billion worth of FTT and BUSD, the fiat-backed stablecoin issued by Binance and Paxos, combined.

“Due to recent revelations that have came to light, we have decided to liquidate any remaining FTT on our books,” he said.

Those revelations refer to rumors about the solvency of FTX, the second-biggest crypto exchange in the world by trading volume. A report last week on the state of Alameda’s finances showed a large portion of its balance sheet is concentrated in FTT and its various activities leveraged using FTT as collateral. Alameda has disputed that claim, saying FTT represents only part of its total balance sheet.

“The Alameda hedge fund is tied to FTX through a ton of FTT tokens and the rumors started that if they are using all of these FTT tokens as collateral… there are two issues,” said Jeff Dorman, chief investment officer at Arca. “If the price of FTT goes way down then Alameda could face margin calls and all kinds of pressure; two is if FTX is the lender to Alameda then everyone’s going to be in trouble.”

“What could have been just an isolated issue at Alameda became a bank run,” he added. “Everybody started to pull their assets out of FTX and there’s this fear that FTX would be insolvent.”

A ‘black eye for trust’

Ryder said he has confidence that FTX and its customers “will be fine” but that the panic is understandable. Bankman-Fried, also known as SBF, has said little on the matter to quell fears.

The problem is the opaque nature and the lack of transparency about FTX reserves, Alameda’s reserves, the links between the two – no one really knows how to intertwined the two are,” he said. “From that side of things, it mirrors Celsius issues a lot in that we have no transparency of funds, and FTX hasn’t come out and reassured investors so that’s what we’re seeing now leak into markets.”

It’s a good argument for more regulation of centralized entities, Ryder added, saying it’s imperative for all centralized entities – be it hedge funds like Three Arrows Capital or Alameda Research or centralized exchanges like FTX and Binance that aren’t publicly listed – to maintain a proof of reserves for the sake of investor protection.

Dorman echoed Ryder’s sentiment, saying that while it may be at worst a short-term liquidity issue, it’s “another black eye for trust.”

“Do they put [the reserves] in a bank account? Do they use them to lend out?” Dorman said. “This is where the lack of transparency comes in: something that probably isn’t a problem and shouldn’t be a problem becomes a short-term liquidity problem if FTX can’t immediately process all withdrawals.”

Share
Facebook
Twitter
Pinterest
WhatsApp
Previous article
Boeing’s aircraft deliveries slipped in October on 737 fuselage flaw
Next article
Consumer confidence is near its lowest in a decade, and that could be a problem for Biden
RELATED ARTICLES
Technology

EV stocks face another turbulent year, but some names are set for big gains, analysts say