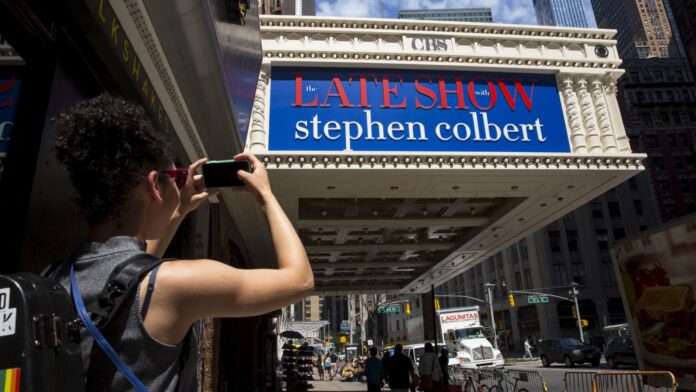 A girl takes a photo of the marquee for “The Late Show with Stephen Colbert” at the Ed Sullivan Theater in Manhattan, New York.

The group of nine people associated with CBS’ “The Late Show With Stephen Colbert” were arrested last month for ignoring instructions stay with a staff escort while inside the building, police said in a press statement.

“Members of the group had been told several times before they entered the Congressional buildings that they had to remain with a staff escort inside the buildings and they failed to do so,” the statement said.

They were there to film a segment for the show featuring Triumph the Insult Comic Dog, a vulgar, cigar-smoking hand puppet voiced and operated by comedian Robert Smigel that has appeared on late-night comedy shows for decades.

“The United States Capitol Police was just informed the U.S. Attorney’s Office for the District of Columbia is declining to prosecute the case,” the police said.

“We respect the decision that office has made,” the department added.

The production team for Colbert’s show had scheduled interviews on Capitol Hill that were “authorized and pre-arranged through Congressional aides of the members interviewed,” Renata Luczak, vice president of entertainment communications for CBS, said in an email to NBC News a day after the arrest on June 16.

On that evening, police said they responded to call for a disturbance in the Longworth House Office Building, where they found the group “unescorted and without Congressional ID, in a sixth-floor hallway.”

“The building was closed to visitors, and these individuals were determined to be a part of a group that had been directed by the USCP to leave the building earlier in the day. They were charged with Unlawful Entry,” the department said in a June 17 statement.

The arrests were made following a public hearing by the House select committee investigating the Jan. 6 Capitol riot, when a violent mob of former President Donald Trump‘s supporters stormed the building, disrupting the transfer of power from Trump to President Joe Biden.

Some conservative critics, such as Fox News’ Tucker Carlson, have attempted to draw comparisons between the late-night staffers and the Capitol rioters in order to suggest a double-standard in treatment by law enforcement.

Kohl’s sale negotiations could drag on for weeks, possibly longer