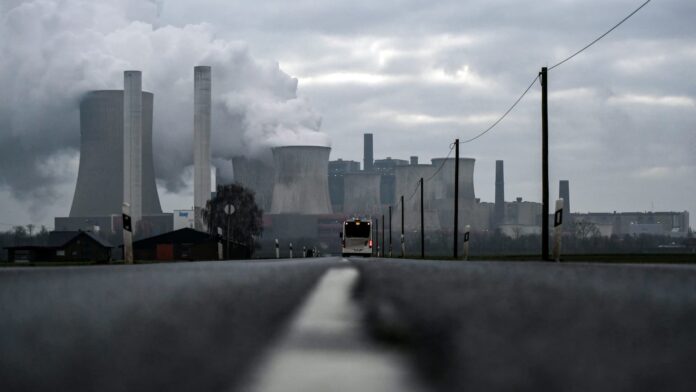 German Economy Minister Robert Habeck has warned that the situation is going to be “really tight in winter” without precautionary measures to prevent a supply shortage.

Reduced flows of Russian gas and the specter of a full supply disruption have prompted some European governments to reconsider coal, one of the dirtiest and most polluting ways of producing energy.

It has stoked fears that the energy crisis could see Europe delay its transition away from fossil fuels, although policymakers insist the burning of coal is a necessary stopgap to help prevent a winter supply shortage.

Coal is the most carbon-intensive fossil fuel in terms of emissions and therefore the most important target for replacement in the pivot to alternative energy sources.

However, Germany, Italy, Austria and the Netherlands have all indicated that coal-fired plants could be used to compensate for a cut in Russian gas supplies.

Russia’s state-backed energy giant Gazprom has cut capacity via the Nord Stream 1 pipeline that runs to Germany under the Baltic Sea, citing the delayed return of equipment serviced by Germany’s Siemens Energy in Canada.

It’s not clear when — or if — Nord Stream 1 gas flows will return to normal levels.

The critical thing now is that they ensure that any new measures are temporary, and that we are on the pathway to fully exit coal in Europe by 2030 at the latest.

Managing director at Europe Beyond Coal

German Economy Minister Robert Habeck has described the government’s decision to limit the use of natural gas and burn more coal as a “bitter” one but said the country must do everything it can to store as much gas as possible ahead of winter.

“The gas storage tanks must be full in winter. That has top priority,” Habeck said in a statement, according to a translation.

The Netherlands on Monday said it would activate an “early warning” phase of an energy crisis plan and remove a production cap at coal-fired plants to preserve gas, according to Reuters.

Henning Gloystein, director of energy, climate and resources at political risk consultancy Eurasia Group, said the short-term solution for Germany and many other European governments is to access any form of energy they can that’s not Russian — “and sadly that does include … coal.”

“Hard coal and lignite, which is the dirtiest form of coal, but Germany has a fair bit of that, and they will probably try and maximize that to avoid a winter gas shortage,” Gloystein told CNBC’s “Squawk Box Europe” on Tuesday.

The Netherlands has removed a production cap at coal-fired plants to preserve gas.

European policymakers should be able to avoid winter energy rationing, Gloystein said. However, he warned that “things could get really nasty” if Russian gas stops flowing when it’s particularly cold.

“The worst-case scenario is energy rationing. That would be that non-essential industries are asked at the first stage to reduce consumption in return for compensation. That’s a plan the government in Germany published over the weekend,” Gloystein said.

“The next step would be to ration industries and households and ask them to consume much less and that is something in Europe that most people have never experienced,” he continued. “That in winter means people will get cold and, in some areas, if it is a cold winter, some people will die and that’s politically really toxic and of course, it is a nasty situation to be in.”

European governments are currently scrambling to fill underground storage with natural gas supplies to provide households with enough fuel to keep the lights on and homes warm during winter.

It comes as part of a broader effort by the bloc, which receives roughly 40% of its gas via Russian pipelines, to rapidly reduce its reliance on Russian hydrocarbons in response to the Kremlin’s nearly four-month-long onslaught in Ukraine.

Kremlin spokesperson Dmitry Peskov said Monday that Russia had gas ready to supply to Europe, but that its equipment should be sent back first. He described the recent dispute as a “man-made crisis” created by Europe.

Germany’s Habeck has previously described Russia’s supply curbs as a “political decision” designed to unsettle the region and ramp up gas prices.

Lauri Myllyvirta, lead analyst at the Centre for Research on Energy and Clean Air, said it was important to understand the timescales of Europe’s decision to turn to coal.

“Europe was caught unprepared by the crisis and a lot of measures will be needed to get through the next winter without Russian gas,” Myllyvirta said.

“At the same time, the EU and numerous EU countries have responded to the crisis by speeding up the deployment of clean energy, which means that we will reduce fossil fuel construction much faster over the next years than expected before the crisis.”

Myllyvirta added that there is scope for the EU to do more in reducing fossil fuel demand in the short term, particularly in buildings and transport. “But it’s important not to lose sight of the fact that the clean energy transition is already being accelerated substantially because of the crisis.”

The EU has said it wants to accelerate plans to increase generation from renewable energy sources, such as wind and solar, while finding ways to diversify its gas supplies in the wake of Russia’s war in Ukraine.

“Decades of failed energy and infrastructure policies have led to a point where our governments are (re)considering coal, a fuel that is responsible for millions of deaths as well as irreversible climate damage,” Mahi Sideridou, managing director at Europe Beyond Coal, told CNBC.

“The critical thing now is that they ensure that any new measures are temporary, and that we are on the pathway to fully exit coal in Europe by 2030 at the latest,” she said.

Sideridou said significant investments in renewable energy — especially wind and solar — energy storage solutions, efficiency measures and more were needed. “This is the only way that we can tackle the cost of living and climate crises, and help deliver peace,” she added.

Amazon stock not expected to grow as much in 2023, JPMorgan says

Euro zone predicted to have a deep recession and a difficult, slow recovery

StockX hits back at Nike over claims of counterfeit shoe sales