HomeUSAFlorida is the only state that hasn’t ordered Covid vaccines for kids...
USA 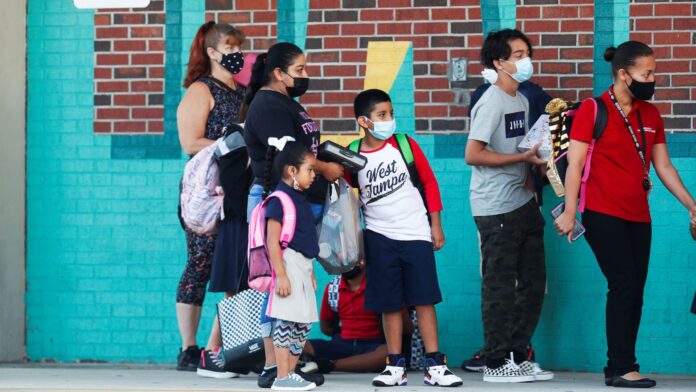 Parents walk their children on the first day of school, amid the coronavirus (COVID-19) pandemic, at West Tampa Elementary School in Tampa, Florida, U.S., August 10, 2021.

Florida parents with kids under 5 years old may find themselves waiting longer than the rest of the country to get their youngest children vaccinated against Covid since state officials have decided not to order any doses for that age group.

Florida is the only state that hasn’t submitted a request with the federal government for doses of the Covid vaccine specifically tailored for children ages six months to five years in anticipation of U.S. regulators giving clearance for that age bracket as early as this weekend, said a person familiar with the matter.

The Florida Department of Health said the state was choosing not to order vaccines from the federal government and instead leaving it to individual doctors to request vaccines directly.

“It is also no surprise we chose not to participate in distribution of the COVID-19 vaccine when the Department does not recommend it for all children,” the agency added.

Food and Drug Administration advisers voted Wednesday to recommend approval of Moderna and Pfizer‘s vaccines for young children, and FDA officials are expected to authorize the vaccines in the coming days. Advisers to the Centers for Disease Control and Prevention are expected to vote on whether to endorse the shots this weekend.

Children under age five are the only group not yet able to get vaccinated against Covid due to months of delays as vaccine makers conducted additional studies.

At least 442 children under 5 have died due to Covid through the end of May, exceeding the number or deaths typically seen from flu or other severe respiratory illnesses, Peter Marks, the FDA’s top vaccine regulator, told the FDA committee Wednesday.

As soon as the federal agencies have signed off, government officials said they are prepared to immediately start shipping doses and anticipate the first shots going into arms Tuesday.

The federal government started taking orders from states two weeks ago for 10 million doses. But since Florida hasn’t placed an order, it’s unclear when parents there will be able to get their young children vaccinated.

As of last week, 52 of 62 jurisdictions had placed orders for the first batch of 5 million doses, and officials were still talking to the other jurisdictions to remind them to get in their orders, said a senior administration official on a call with reporters last week.

Florida’s decision not to seek vaccines from the federal government is likely to increase scrutiny of Gov. Ron DeSantis’ response to the pandemic. DeSantis, a Republican and potential 2024 presidential candidate, has been an outspoken opponent of vaccine and mask mandates during the pandemic.

The Florida Department of Health issued guidance in March saying healthy children aged 5 to 17 “may not benefit from receiving the currently available COVID-19 vaccine,” and that parents who have children with underlying conditions should discuss the risks and benefits with their doctor.

Florida gubernatorial candidate Charlie Crist, a Democrat, said Wednesday it was “reckless and unconscionable” for the state not to be ordering vaccines for the youngest kids.

“Governor DeSantis has once again failed the people of Florida when it comes to protecting them from the pandemic,” Crist said in a statement. “And his latest failure is aimed squarely at our children.”