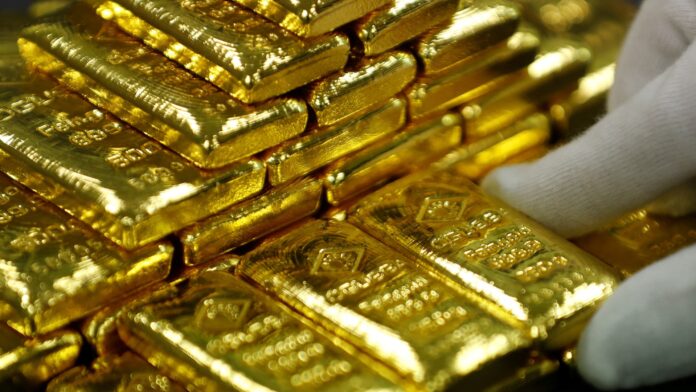 Gold has generated a “death cross” pattern, which signals a grim outlook for the commodity as it gets hit by a strong dollar, according to one strategist. A death cross forms when a security’s 50-day moving average falls below its 200-day moving average. Technical analysts and strategists interpret this chart pattern as a negative indicator for assets. The breach is the latest signal that gold, which has fallen to levels not seen since 2021, is in trouble, according to a Thursday note from Ned Davis Research. The firm downgraded the outlook for gold to bearish from neutral. The downtrend is “intact with relatively restrictive central bank policies,” wrote Tim Hayes, chief global investment strategist at Ned Davis. “We are bearish.” Gold has fallen as the U.S. dollar simultaneously strengthened. Prices of the two assets typically move opposite to each other, as a stronger dollar makes it difficult for buyers in foreign countries to buy the precious metal. Hayes has a “decisively bullish” outlook on the dollar as it surges to its highest level in roughly 20 years. Rising bond yields and expectations of tighter monetary policy from the Federal Reserve to combat inflation have boosted the greenback. “And that’s bad news for gold,” Hayes wrote. At the same time that gold has flashed a death cross signal, the dollar is generating a “golden cross” pattern, according to the note. (A “golden cross” signal occurs when the 50-day moving averages climbs above the 200-day, and it’s generally viewed as a positive indicator). Gold has formed a death cross signal at the same time the dollar generated a golden cross pattern about a third of the time since 1979, Hayes wrote. During these occurrences, gold lost 1.5% on a per annum basis while the dollar gained 3.5% over the same time. Another bearish indicator for gold is the continued downtrend in commodities, according to Hayes. Other metals such as silver, copper and aluminum have posted new 252-day lows as July kicked off, the note said. The strategist recommends investors keep an overweight allocation in cash and remain underweight stocks and bonds.

Wells Fargo downgrades Costco, says shares are too expensive given the ‘hurdles’ ahead