How would a G-7 price cap on Russian oil work? 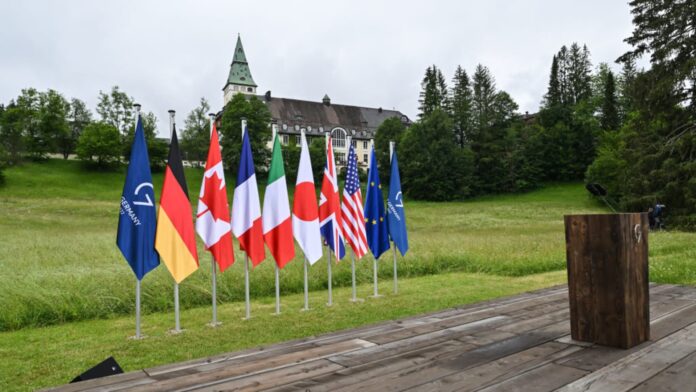 The G7 has floated the idea of an oil price cap, but experts are doubtful about how effective this would be.

The world’s seven-largest industrialized economies have floated the idea of a price cap on Russian oil to further squeeze the Kremlin’s ability to fund its onslaught in Ukraine and try to protect consumers amid surging energy prices.

The G-7’s pursuit of a price ceiling on Russian oil is not without its challenges, however, with energy analysts highly skeptical about the integrity of the proposal.

For its part, the Kremlin has warned any attempt to impose a price cap on Russian oil will cause more harm than good.

How the idea came about

The bloc used to receive about 25% of its oil imports from Russia and it represented one of the most important buyers for the Kremlin. Stopping these oil purchases are an attempt to hurt Russia’s economy after the unprovoked invasion of Ukraine, but they are difficult to end overnight given how some EU countries are heavily dependent on Russian fossil fuels.

U.S. President Joe Biden presented the idea of an oil price cap to the rest of the G-7 leaders over the weekend of June 25 and 26 and his counterparts agreed to look at how to do it. The G-7 is comprised of the U.S., Canada, France, Germany, Italy, the U.K. and Japan.

German Chancellor Olaf Scholz said the idea was very ambitious and needed a “lot of work” before becoming reality.

A spokesperson for the European Commission, the executive arm of the EU, said in an email to CNBC Friday: “We share the G7 countries’ concerns about the burden of energy price increases and market instability, and how these aggravate inequalities nationally and internationally.”

“In this context, as tasked by the European Leaders, the Commission will continue our work on ways to curb rising energy prices, including assessing the feasibility of introducing temporary import price caps where appropriate,” the same spokesperson said, adding the discussions are treated as “a matter of urgency.”

Energy analysts have questioned exactly how the G-7 can impose a price ceiling for Russian oil, warning that the plan could backfire if key consumers are not involved, and time may be running out to make it workable.

“I’m one of those scratching my head,” Neil Atkinson, an independent oil analyst, told CNBC’s “Squawk Box Europe” on Thursday.

“Something like this could only work if you get all of the key producers and crucially all of the key consumers working together and then finding some way of enforcing whatever plan you come up with,” he added.

A tanker moored in a gas and oil dock at the Port of Constanta in Romania.

China and India have “benefitted enormously” from discounted Russian crude, Atkinson said. Russian oil has been selling at a heavy discount of $30 or more when compared to international benchmark Brent crude futures at $110 a barrel — and China and India have been snapping it up.

Atkinson also highlighted a lack of unity over Russia’s invasion of Ukraine given that China and India have failed to explicitly condemn the Kremlin.

“In any event, the Russians won’t just sit there and do nothing. They can play games with supplies of oil and indeed gas … they can mess with the G-7’s head in some respect so I think this plan is really a non-starter,” Atkinson said.

Do we really think that Russia will actually accept this and not retaliate? I think this sounds like a very, very good theoretical concept but it is just not going to work in practice.

Co-founder and director of research at Energy Aspects

“They haven’t thought it through, they haven’t spoken to India and China … Do we really think they are going to agree to this? And do we really think that Russia will actually accept this and not retaliate? I think this sounds like a very, very good theoretical concept but it is just not going to work in practice.”

Sen said the idea that countries around the world are on the same page as Western policymakers, particularly relating to energy security, is “the biggest misconception right now.” She added, “I think that really needs to go away.”

For Claudio Galimberti, senior vice president at energy research firm Rystad, the most direct mechanism to impose a price cap on Russian oil is via insurance.

“The International Group of Protection & Indemnity Clubs in London covers around 95% of the global oil shipping fleet. Western countries could try to impose a price cap by letting buyers keep that insurance, as long as they agree to pay no more than a certain price cap for the Russian oil on board,” Galimberti said in a note.

“However, there are many obstacles that could derail such a plan,” he added.

Among the most obvious examples, Galimberti said, was the fact that Russia could simply decide not to sell at the prices set by the cap, particularly if the benchmark is very low and close to the cost of production.

President Vladimir Putin has already shown his willingness to withhold natural gas supplies to so-called “unfriendly countries” that have refused to meet his gas-for-rubles payment demands.

China is the “next most likely obstacle,” Galimberti said, since Beijing may decide for geopolitical reasons “to lend support to Russia by accepting inferior Russian insurance and therefore facilitate a loophole for the price cap.”

“Still, a price cap is surely a measure worth considering at this stage, albeit time is running out, as the EU is determined to ban imports of Russian oil by the end of the year,” Galimberti said.

How has Russia responded?

Russia has warned any attempt to limit the price of Russian oil could wreak havoc in the energy market and push commodity prices even higher.

Deputy Prime Minister Alexander Novak on Wednesday described the move by Western leaders to consider imposing a price cap as “another attempt to intervene into the market mechanisms which may only lead to market’s disbalance … which would lead to [a] price increase,” according to Reuters.

Novak said he was confident Russia would restore oil output to pre-sanction levels in the coming months, largely because a significant amount of Russian crude had been re-routed to Asian markets.

Starz could turn into ‘acquisition machine’ after spinoff from Lionsgate

Glam makeup and dressing up are back, boosting Macy’s and Ulta