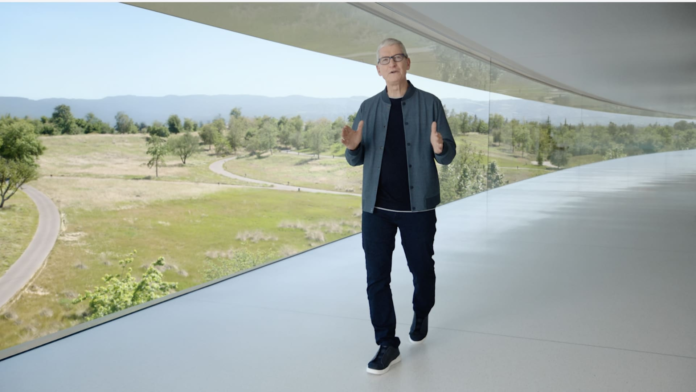 Apple just announced a new 13-inch MacBook Pro with the M2 chip. The external appearance itself, though, doesn’t seem to be getting much of a revamp.

The newest MacBook Pro starts at $1,299. Apple didn’t provide exact release dates, but said it will be released next month. The company’s Mac production has been severely slowed by Covid-related lockdowns in China.

Apple is promising up to 20 hours of battery life, along with an 8-core CPU, 10-core GPU and up to 24 GB of memory with the new Macbook Pro.

The MacBook Air comes in four colors: space grey, starlight, midnight and silver. It will cost $1199 and Apple will still sell the earlier MacBook Air with its M1 chip.

It’s charged with Apple’s MagSafe and has two Thunderbolt ports.

Apple says it takes up 25% less volume than the last MacBook Air. It’s 2.7 pounds and will have a 13.6″ display with thinner borders than its predecessor.

Apple didn’t provide an exact launch date except that it will be released next month. Apple’s Mac production has been severely slowed by lockdowns in china

Apple just announced its latest chip, the M2. It’s the successor to Apple’s M1 chip that’s used in Macs and iPads. The M2 will make its debut in the new MacBook Air and 13-inch MacBook Pro, also announced on Monday.

The chip will include 25% more transistors and 50% more bandwidth than M1.

Apple said it’s focused on power-efficient performance, maximizing speed performance while limiting the amount of power needed to do so.

The update will include new long-awaited sleep tracking features so users can see how long they’re in each sleep stage. Users will see sleep stage data on Apple Watch in the Sleep app and can view more detailed information on their iPhones.

The workout app is also being revamped to include features like heart rate zones and new running metrics to track how efficiently you run.

As part of the update, Apple is rolling out a new Siri user interface and new banner notifications. Users can also search for new podcasts on the watch. WatchOS 9 will additionally include new watch faces, including an astronomy face and the lunar calendar.

Apple didn’t announce an actual car itself on Monday, but it revealed a major update to CarPlay, Apple’s in-dash software for iPhones. Apple says the new software has “deep integration with the car’s hardware,” and can control functions like air conditioning and display widgets. So, your iPhone will communicate with your car and provide all the data on the screens of your car, like your speed, how much gas is left, maps, rpm and more. Apple is working with companies like Ford, Nissan and more to support the next generation of CarPlay and said the next vehicles that support it will start to be announced late next year. Apple did not announce any supported vehicles. — Kif Leswing

Apple introduced a new feature called Safety Check that enables users to quickly turn off all services and apps being shared with the user’s family, like location, or whether a user’s texts go to other devices aside from their phone.

Apple said the feature was designed in partnership with women’s groups, and is designed to make it easier to stay private and protect personal data and safety when leaving a relationship. — Kif Leswing

Apple just announced its buy now, pay later product, Apple Pay Later, which will allow you to buy things wherever Apple Pay is accepted and then pay for it over four payments over six weeks. Apple says there are no fees.

Shares of Affirm, a competing service, are down about 6% on the news.

Users will be able to manage their payments through the Wallet app. The company is also rolling out order tracking through the wallet.

Apple has been rumored to get into the buy now, pay later space for about a year now. The feature is attractive to consumers who want to buy pricey products but don’t have all of the funds at once.

Apple will allow users to edit and recall iMessages

Apple has added three major features to its messaging app, Messages. If the message is an iMessage, not an SMS text, then users will be able to edit messages, recall messages sent by mistake, and snooze texts so users can handle them later. These small tweaks will change how nearly 1 billion people send texts. — Kif Leswing

It’s the “biggest update ever to lockscreen, completely reimagining how it works,” Apple SVP of software engineering Craig Federighi said. It’s a brand new look that allows users to customize the lock screen with widgets — which have already been available on the home screen — by pressing and holding. Widgets are small icons that users can click on to quickly access tools like the weather app.

Apple CEO Tim Cook appeared live-on stage to kick off the WWDC event. He spoke briefly and turned it over to software chief Craig Federighi, who led the crowd in a cheer of “go developers!” — Kif Leswing

People are beginning to take their seats ahead of the keynote

People are taking their seats ahead of the event.

People are starting to make their way to their seats ahead of the keynote. It’s pre-recorded, so there are lots of big screens for everyone to tune in from. And I like that there’s a shaded area.

Here’s what you can expect

Apple’s annual developer conference, WWDC, is all about catering to software developers. They’re the folks who build apps for the Mac, iPhone, iPad, Watch and TV. This is usually when Apple unveils new tools for them, and big new updates for the iPhone, iPad and other platforms. Apple is reportedly gearing up to announce a big new iPad software update that adds better multitasking, so you can run more apps at the same time side-by-side. And the iPhone is expected to get new updates to the lock screen. It may also announce new MacBook Airs. However, unlike the September iPhone events, WWDC is usually more focused on software than hardware. And, typically, the software that’s announced at WWDC rolls out to everyone sometime in the fall.

Homecoming for Apple employees after two years of remote work

WWDC is gathering Apple developers and press for the first time in two years. But the event is also a homecoming for many Apple employees who have been working remotely for the past two years because of the pandemic. Some employees are meeting their teammates in person for the first time, like those who have traveled from other major Apple offices, like its facility in Austin, Texas. Apple started requiring corporate employees to return to the office earlier this year. — Kif Leswing

Apple Store down ahead of WWDC 2022 keynote

The Apple Store website is down, which suggests that Apple might also announce new products during the WWDC 2022 event. It still seems a little early to announce the augmented reality headset, so my bet is on some sort of new Macs. Bloomberg’s Mark Gurman suggested over the weekend that Apple may be ready to announce a redesigned MacBook Air. It will reportedly include MagSafe charging, the latest Apple processor and new colors.

Walking up to the event. It’s a gorgeous day.

We’re here for WWDC 2022. Here are a couple of pictures of the campus. It’s a gorgeous day.

Inside Apple’s Spaceship campus for WWDC 2022

Apple’s been working on a headset for years. Reports have suggested it could launch in either 2022 or 2023. It’s the one product that’s top of mind for everyone right now, since it would be an entirely new product area for Apple. It could make sense for CEO Tim Cook and the team to announce the software for the headset, reportedly called realityOS, since this is a developer-focused event with folks who would build the apps for the device. However, Bloomberg recently suggested that we may not get a look. Still, we might get hints about what Apple is planning. The company may build some tools into existing software to allow developers to make virtual or augmented reality versions of their existing applications. If that happens, we know the headset can’t be far off. Or maybe we’ll be surprised and we’ll get a teaser or full announcement.

We’re live from the Worldwide Developers Conference for the first time since the pandemic started. Apple invited some media and developers to its headquarters in Cupertino, California, to watch the keynote. But there are a few differences from prior years. For one, we’re at the headquarters instead of the San Jose conference center where Apple held the event for several years prior to the pandemic.

And the keynote isn’t live like in the past. Instead, we’ll be watching a pre-recorded version just like everyone tuning in from home. Still, it shows that big tech events are starting to return to some version of normalcy. Google’s developer conference in May was also held in person but wasn’t open to much of the press.

Oil producer group in focus ahead of Russia sanctions