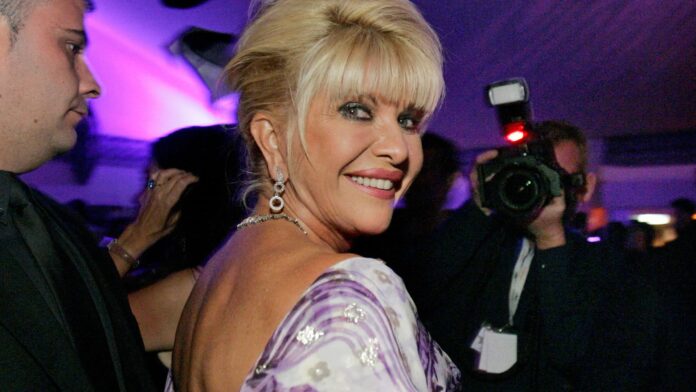 Ivana Trump smiles at her belated birthday party at the Pangaea Soleil club during the 59th Cannes Film Festival in Cannes May 24, 2006.

“I am very saddened to inform all of those that loved her, of which there are many, that Ivana Trump has passed away at her home in New York City,” the former president said in a post on his social media platform, Truth Social. “She was a wonderful, beautiful, and amazing woman, who led a great and inspirational life. Her pride and joy were her three children, Donald Jr., Ivanka, and Eric. She was so proud of them, as we were all so proud of her. Rest In Peace, Ivana!”

Ivana Trump was 73. Her cause of death is unknown.

A former model who was born in Czechoslovakia, the former Ivana Zelnickova married then-businessman Donald Trump in 1977, and held key positions in his businesses, including the Trump Organization, during their 15-year marriage. The couple had three children — Donald Trump Jr., 44, Ivanka Trump, 40, and Eric Trump, 38.

In a statement, the Trump children remembered their mother as “an incredible woman — a force in business, a world-class athlete, a radiant beauty, and caring mother and friend.”

“Ivana Trump was a survivor. She fled from communism and embraced this country. She taught her children about grit and toughness, compassion and determination. She will be dearly missed by her mother, her three children and ten grandchildren,” they wrote.

Known as Ivana and The Donald in the city’s tabloids, their marriage came to a sensational end in 1992 after reports linked Donald Trump to model and actress Marla Maples, who would become Trump’s second wife. The messy divorce dominated the front pages of the city’s papers, but the pair remained close after the split.

“I have the direct number to White House,” she said in an interview on ABC’s “Good Morning America” in late 2017, months after her former husband became president. “But I’m not really going to call him there because Melania is there, and I don’t want to cause any kind of jealousy or something like that, because I’m basically first Trump wife, OK? I’m first lady, OK?”

Promoting her tell-all memoir, “Raising Trump,” Ivana Trump told CBS that same year that her ex-husband had offered her the U.S. ambassadorship to the Czech Republic, but she declined because “I like my freedom.”

Ivana Trump maintained a successful career following her split from Trump, running several of her own business ventures, including a cosmetics line, writing numerous books and authoring various advice columns.

Ivana Trump married a total of four times, and split from her last husband, Rossano Rubicondi, an Italian actor, in 2008. She blamed the divorce from her two decades younger husband on the couple wanting to live in different cities.

She said in a statement at the time, “Que sera sera!” (Whatever will be, will be!)

‘She needs to pay her debt’