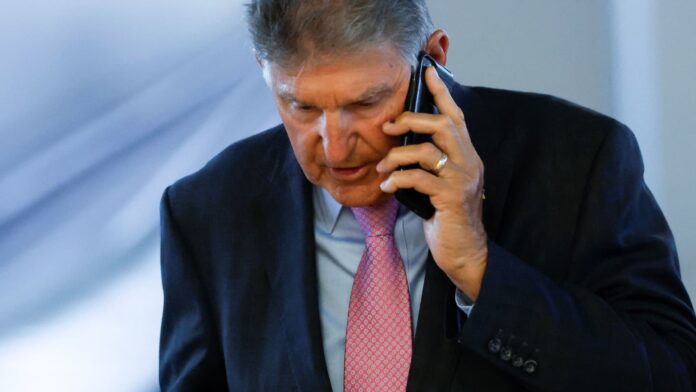 That latest fundraising haul from wealthy business leaders and corporations came in the second quarter, which concluded a little over two weeks ago, at the end of June, according to Federal Election Commission records. The donations arrived as Manchin, a conservative Democrat from West Virginia, engaged in negotiations over climate change and tax legislation, which are priorities for President Joe Biden and their party.

This week, he said he will not move ahead with further discussions on these provisions.

Manchin, in an interview on West Virginia’s MetroNews’ “Talkline” on Friday, said he wants to hold off on the party’s climate and tax policy proposals until after the next next national report on inflation data. Inflation rose by more than 9% in June.

Manchin previously rejected Biden’s $1 trillion-plus social and climate spending proposal, which was known as Build Back Better. Representatives for Manchin did not respond to a request for comment.

Business and Wall Street leaders have heaped praise on Manchin as he holds up his party’s agenda. He saw a wave of donations from corporate leaders and big energy companies themselves before his latest decision to stall his party’s policy goals.

In May, Home Depot co-founder Ken Langone and longtime investor Stanley Druckenmiller co-hosted a meet-and-greet breakfast for Manchin, according to people briefed on the matter, who declined to be named since the event was private.

Langone previously praised Manchin on CNBC and said he would host “one of the biggest fundraisers I’ve ever had for him.” Calls to Langone’s and Druckenmiller’s offices were not returned.

PACs for energy companies such as Coterra Energy, NextEra Energy and Xcel Energy all donated to Manchin’s campaign in the past quarter. Those businesses could be affected if Congress passes any climate-related bills. West Virginia produces crude oil, natural gas and coal.

The American Exploration and Production Council gave $1,700 to Manchin’s campaign in June. That trade association represents “the largest independent oil and natural gas exploration and production companies in the United States,” according to its website. The group lists gas and oil giants as members, including Hess, Chesapeake Energy and ConocoPhillips. The trade association and the energy companies that donated to Manchin’s campaign did not respond to a request for comment.

Manchin is up for reelection in 2024, the year of the next presidential campaign. His campaign’s latest filing says it has just over $9 million on hand.

Kraft, the owner of the Patriots, donated two $2,900 checks to Manchin’s reelection campaign in May. Kraft has a net worth of just over $8 billion, according to Forbes. An individual can give $5,800 to a campaign, with the max of $2,900 being earmarked for an account designated for a primary election account and the other half being put toward a general election.

His son, Patriots President Jonathan Kraft, gave the same amount to Manchin that month. A spokesperson for the Patriots did not respond to a request for comment.

Paul Tudor Jones, a Wall Street hedge fund manager, also gave two $2,900 checks to Manchin two months ago. Forbes says Jones has a net worth of around $7 billion. A spokesperson for Jones declined to comment.

Warren Stephens, the CEO of investment bank Stephens Inc., also maxed out to Manchin’s campaign, as did multiple leaders within Blackstone and a managing director at Goldman Sachs. A spokesperson for Stephens declined to comment.

Twitter says it significantly slowed hiring during the second quarter

natural gas, nuclear are green energy in some circumstances