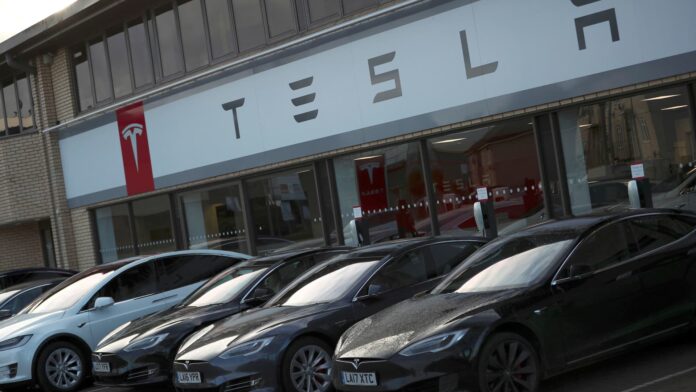 Shares of Tesla could still fall more than 40% from here as the electric vehicle maker faces challenges ramping up deliveries, according to JPMorgan. Analyst Ryan Brinkman reiterated an underweight rating and trimmed the price target for Tesla, saying in a Tuesday note that the firm lowered its second-quarter and full-year earnings estimates after the electric vehicle maker reported weaker quarterly deliveries than expected. “We are lowering our estimate of 2Q and full year 2022 EPS (our out-year estimates upon which we base valuation are less changed) after Tesla over the weekend reported quarterly deliveries of 254,695, materially less than the 310K delivered in 1Q22 and the 315K we forecast at the time of 1Q earnings in April,” the note read. Weaker production at Tesla’s Shanghai factories was “likely the largest contributor to the production shortfall pressuring deliveries during the quarter,” as Covid restrictions persist in China, the note read. Analysts also believe that Tesla faced challenges in its Austin, Texas, and Berlin factories. JPMorgan dropped its second-quarter earnings estimate to $1.70 from $2.26. The 2022 full-year estimate fell to $10.80 from $11.50. The analyst also trimmed the December 2022 price target to $385 from $395. It represents a more than 40% decline for the electric vehicle maker from its most recently closing price. Brinkman also warned of the potential for sharp battery metals inflation to cut into Tesla’s profits. “While Tesla does not provide a detailed earnings bridge similar to most other automakers … and much focus is today on volume, we suspect that the interplay of price and cost may matter most for Tesla earnings this year,” the note read. Shares of Tesla declined nearly 2% in Tuesday premarket trading. —CNBC’s Michael Bloom contributed to this report.

Seagate will cut 3,000 employees in latest sign of major PC and cloud slowdown