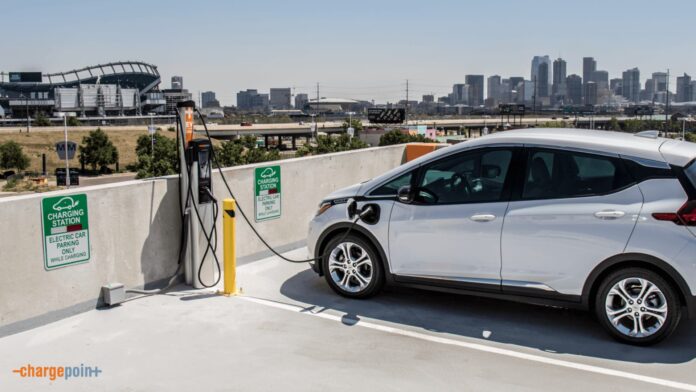 Investors looking for exposure to the electric vehicle sector should focus on one particular area, according to JPMorgan: charging infrastructure. The firm reiterated its overweight rating on shares of ChargePoint and EVgo , saying both companies are “poised to capitalize on market opportunities as first movers and category creators.” Analysts led by Bill Peterson said that expectations ahead of second-quarter earnings are low due to inflation and rising interest rates, which has sparked a broad rotation out of growth-oriented areas of the market. Within this environment, JPMorgan said it favors companies in areas that have significant revenue scale and margin expansion opportunities. Additionally, the firm said to focus on companies that can sustain revenue growth even in a recessionary environment. “We expect to see continued growth in EV charging where there have been no notable signs of demand destruction outpacing the impacts of supply recovery at this time,” the firm said Wednesday in a note to clients. JPMorgan added that the National Electric Vehicle Infrastructure Program will make $5 billion available over the next five years for EV infrastructure, which is a positive catalyst for EV charging names. Peterson expects ChargePoint’s second-quarter results to show improving margins, with further improvement during the second half of the year as supply constraints ease. Additionally, the firm said that ChargePoint is shifting toward higher-margin products, and that technology improvements should drive down costs. “We think the overall investor sentiment around charging remains relatively positive with positive catalysts set to unlock in 2H22,” the firm said. ChargePoint sells charging infrastructure while also generating revenue from its software services. JPMorgan has an $18 target on the stock, which is 42% above where shares closed on Tuesday. When it comes to EVgo, Peterson said the company has been “expanding its network prudently such that mature markets are able to inflect to profitability with improving utilization.” The firm’s $13 target is 53% above where the stock finished Tuesday. Both stocks have taken a blow during 2022, with ChargePoint and EVgo down roughly 34% and 15%, respectively, as of Tuesday’s close. But JPMorgan noted that this is far from unique to these two names. Rather, early-stage companies have been hit nearly across the board as investors flee to safe haven assets. The firm pointed to a recent survey from AAA , which found that 25% of U.S. consumers would be likely to buy a battery-electric vehicle as their next car, as indication of momentum behind EVs. “The survey bodes well for future demand growth for EVs…and by proxy for charging infrastructure which we expect to grow at a similar pace,” the firm said. – CNBC’s Michael Bloom contributed reporting.

Fed’s preferred inflation measure rose 4.7% in May, around multi-decade highs