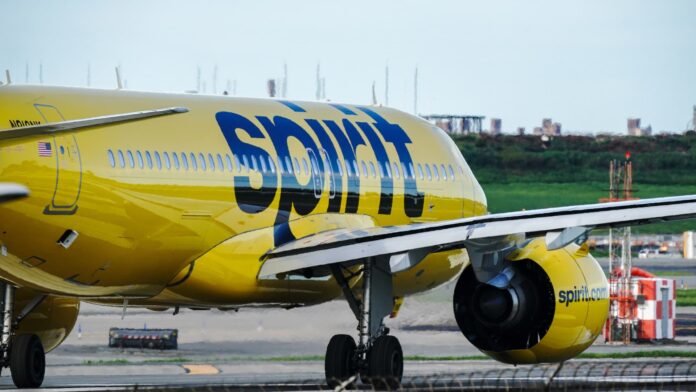 Big gains could be ahead for Spirit Airlines as a merger with JetBlue Airways becomes an increasingly likely possibility, JPMorgan Chase says. “Because of this we believe SAVE’s share price is predicated upon the probability of JBLU successfully winning its bid for SAVE and the probability that SAVE continues with its ULCC merger,” wrote analyst Jamie Baker. Baker upgraded the stock from neutral to overweight, calling it a “tactical trade idea” as merger talks ramp up. Both Frontier Airlines and JetBlue have competed to buy the discount airline in recent months. JetBlue’s most recent offer would pay $31.50 a share to stockholders to acquire Spirit, which announced a merger agreement with budget carrier Frontier Airlines in February. “Most importantly, Spirit shares are trading in line with the proposed Frontier offer, and – owing to the break fee – slightly below what Spirit shareholders would receive if the DOJ were to block the transaction today, holding current share prices constant,” Baker wrote. “In our mind, this largely insulates Spirit shares from any material downside owing to fundamentals, at least in the near term. In the absence of material forecasted downside, we believe Spirit shares should be held at least until the revised June 30 shareholder vote.” JPMorgan’s $30 price target for Spirit implies the stock can rally 35% from Thursday’s close. The shares are up 2% this year and 6.4% since the start of June. Spirit’s stock rose 3.5% in premarket trading, while JetBlue added 1.2%. — CNBC’s Michael Bloom contributed reporting