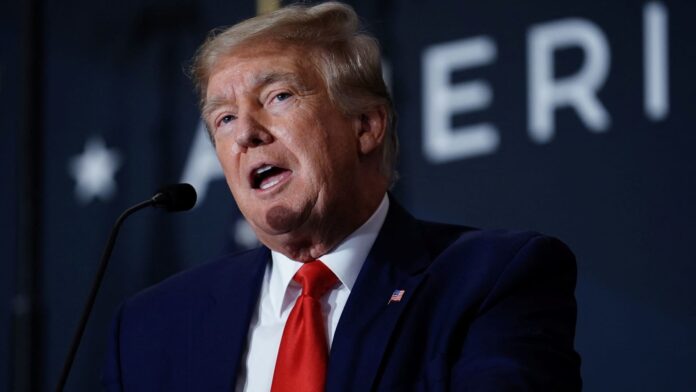 The Department of Justice is investigating former President Donald Trump’s actions leading up to the Jan. 6 riot at the U.S. Capitol as part of its criminal probe of efforts to overturn the 2020 election results, an administration official familiar with the investigation said.

The inquiry is related to the department’s broader probe of efforts overturn the 2020 election results and not a criminal investigation of Trump himself, the official said.

The Washington Post first reported that the Justice Department was investigating Trump’s actions leading up to Jan. 6, citing four people familiar with the matter, whom it did not name. The department declined to comment on the investigation.

NBC News has reached out to a spokesperson for Trump for comment.

The Post, citing two people familiar with the matter, reported that prosecutors have asked witnesses before a grand jury about conversations with Trump. Some of the questions focused on substituting Trump allies for electors in states President Joe Biden won and on a pressure campaign on then-Vice President Mike Pence to overturn the election, the newspaper reported.

The Post also reported that the Justice Department has gotten phone records of aides that include former Trump chief of staff Mark Meadows. The Department of Justice, a spokesperson for Trump, and a lawyer for Meadows did not respond to the Post’s requests for comment. NBC News has not confirmed the details of the Post’s report about the DOJ’s line of questioning or the phone records.

U.S. Attorney General Merrick Garland said an interview that aired on NBC Nightly News Tuesday that “anyone” would be held accountable.

“We will hold accountable anyone who was criminally responsible for attempting to interfere with the transfer, legitimate, lawful transfer of power from one administration to the next,” Garland told NBC Nightly News’ Lester Holt.

More than 850 people across all 50 states have been arrested in connection with the attack on the U.S. Capitol on Jan. 6, 2021, as Congress was formally counting the electoral votes that showed Biden had won, according to officials.

The House Jan. 6 committee has been airing hearings and interviews about the actions that led up to that day and the actions Trump took, or did not take, as it unfolded.

Last month it was revealed that members of Trump’s team challenged the 2020 election by organizing slates of alternative “fake electors” in seven pivotal states.

Fake electors submitted false certifications of Trump victories to the National Archives in hopes of having then-Vice President Mike Pence substitute them for the actual electoral votes that made Biden president, according to testimony and documents presented at a June hearing of the committee.

Garland said in the NBC News interview that aired Tuesday that the Justice Department is conducting “the most wide ranging investigation in its history.”

Short was with Pence at the U.S. Capitol during the Jan. 6 attack. He would be the highest-ranking former Trump administration official known to have testified before the federal grand jury.

Garland said in the NBC News interview that Trump’s possible candidacy for president in 2024 would not impact the Justice Department investigation. Trump has not said whether he will run again.

No former president in U.S. history has ever been charged with a crime. Richard Nixon, the only president to resign from office, was pardoned by then-President Gerald Ford. Nixon was never charged with any crime.