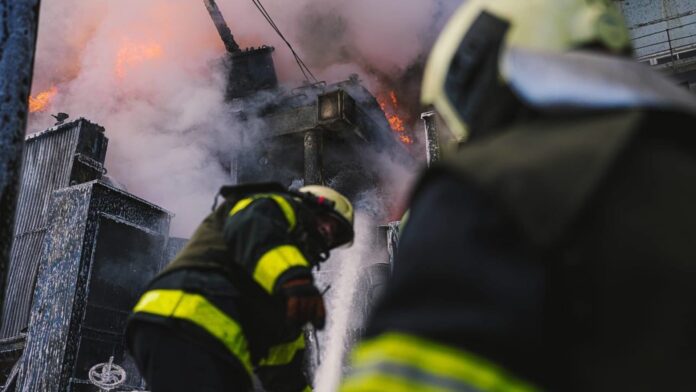 Ukraine grain exports down near 32% so far this season, ministry says

Ukraine’s grain exports are down year on year in the 2022/23 season so far to almost 13.4 million tonnes from 19.7 million tonnes at the same date a season earlier, the agriculture ministry data showed on Wednesday.

The country’s grain exports have slumped since Russia invaded in February, with the closing off of its Black Sea ports driving up global food prices and prompting fears of shortages in Africa and the Middle East.

A photograph taken on October 31, 2022 shows a cargo ship loaded with grain being inspected in the anchorage area of the southern entrance to the Bosphorus in Istanbul.

Three Black Sea ports were unblocked at the end of July under a deal between Moscow and Kyiv, brokered by the United Nations and Turkey. The shipments are continuing despite Russia’s decision to suspend its participation in the agreement.

The government has said that Ukraine could harvest between 50 million and 52 million tonnes of grain this year, down from a record 86 million tonnes in 2021, because of the loss of land to Russian forces and lower yields.

Russian forces in Ukraine have seen far more casualties than Moscow was expecting, analysts say. In this image, Ukrainian soldiers are salvaging equipment from the body of a dead Russian soldier after a Russian vehicle was destroyed by Ukrainian forces on March 3, 2022.

Ukraine’s armed forces said Wednesday that they have eliminated 800 Russian troops in Ukraine over the last 24 hours, bringing Russia’s total personnel losses, as per Ukraine’s count, to 73,270.

The General Staff of the Armed Forces of Ukraine reported on Facebook Wednesday that they had destroyed 16 more Russian tanks over the last day (bringing the total destroyed to 2,714), 24 more armored combat vehicles as well as a helicopter and a warplane among other weapons systems.

There is much dispute over the number of Russian troops that have died during the war that began in February. Russia has released very few updates on the number of fatalities among its forces. The U.K., for example, said in September that it believed over 25,000 Russian troops had died (although the number rose to around 80,000 when troops captured or wounded were included). Russia’s defense minister said in September that 5,937 soldiers had been killed.

Ukraine’s armed forces noted that Russian troops have suffered the highest losses in the Avdiivka and Lyman areas. CNBC was not able to verify the accuracy of the report.

Zelenskyy says grain corridor has to be defended

Farmers are seen harvesting wheat in Druzhkivka, Ukraine on 7 August, 2022.

“The grain corridor needs reliable and long-term protection,” the president said in his nightly address Tuesday.

“Russia should clearly know that it will receive a tough response from the world to any steps that disrupt our food exports. This is literally a matter of life for tens of millions of people,” he noted.

The grain corridor was established after the U.N. and Turkey brokered a deal between Russia and Ukraine in July to allow exports such as corn, wheat and rapeseed (of which Ukraine is a major producer) to leave the country via the Black Sea.

Russia withdrew from the deal last weekend, however, accusing Ukraine of using the maritime corridor to carry out an attack against infrastructure and its Black Sea Fleet in Sevastopol in Crimea, which it annexed in 2014.

Ukraine denies using the corridor for such activities and has not said whether it was responsible for the attack. In turn, it has accused Russia of undermining the deal since September. Meanwhile, the U.N. has called on Russia to return to the deal, warning it could drive global food prices even higher and exacerbate food shortages faced by vulnerable countries in Africa and Asia.

Russian President Vladimir Putin told his Turkish counterpart Tuesday that Moscow could consider returning to the deal, which was due to be renegotiated in a couple of weeks’ time, if an investigation is carried out into the drone attack.

Ukraine, Turkey and the U.N. have agreed not to plan for any movements of ships under the grain initiative from Wednesday.

Ukrainian First Lady Olena Zelenska made an impassioned speech on Tuesday calling on the global technology community to aid her country and combat Russia’s invasion.

Speaking at the Web Summit conference in Lisbon, Zelenska told attendees that technology has become “battlefield” in the Russian war against Ukraine. Russia “puts technology at the service of terror,” she said.

“Technology has in many ways brought us closer together through social media and messenger apps,” Zelenska said Tuesday evening.

“But imagine, all of a sudden a social media account stops getting updated, the person running it no longer responds to messages. And then you see their black and white photos and you know the unthinkable has happened. During this month, thousands of Ukrainian social media accounts will never be updated again. Those people are gone.”

She called on tech entrepreneurs and investors to invest in Ukraine’s tech and science sectors and make donations to her Olena Zelenska Foundation. Launched in September, the foundation aims to restore Ukrainian hospitals and schools that have been destroyed in the war. Children “should be flying to Mars, not running to their basements” to flee Russian shelling in war shelters, Zelenska said.

“You are the force that moves the world,” she said. “You have the potential and technologies that can help, not destroy; by helping Ukraine, you can move the world in the right direction.”

Before Zelenska was due to speak, Paddy Cosgrave, Web Summit’s founder, launched an attack on Ireland’s government over Russia. He said it has allowed certain Russian actors to avoid facing sanctions.

“The Irish government has for years lobbied both Brussels and the White House so that certain Russian oligarchs might be exempted from both U.S. and EU sanctions,” Cosgrave, who has long been critical of the Irish government, said onstage at Web Summit.

“My message is simple, how can Ireland help Ukraine stop bankrolling Russian oligarchs?” he added.

For its part, Ireland says it is opposed to Russia’s war against Ukraine and has joined its European Union alies in imposing strict sanctions on Moscow.

Macron accused Russia of weaponizing global food supplies by ending its cooperation with the U.N.-backed deal that led to the reopening of three key Ukrainian ports.

Macron also said he confirmed to Zelenskyy that France is fully mobilized “to increase our military support for Ukraine as soon as possible, in particular anti-aircraft defense.”

Macron also said that France was prepared to help Ukraine with its electric infrastructure, which has been significantly damaged in Russian attacks.

“Action is needed before winter. We shall swiftly mobilize both the international community and the private sector,” Macron added on Twitter.

Ukrainian President Volodymyr Zelenskyy said that about 40% of his country’s entire energy infrastructure has been seriously damaged by Russian missile and drone strikes.

Moscow has carried out several devastating missile and drone strikes against what Ukraine said were civilian targets and critical infrastructure such as energy facilities.

Iran and Russia have sharply denied reports that Tehran supplied Moscow with a fleet of drones for the Kremlin’s war in Ukraine. The Kremlin has also repeatedly denied that it uses Iranian-made drones to target residential and other high civilian areas.

The White House is concerned that Iran is preparing to send Russia more drones as well as surface-to-surface missiles for its war in Ukraine.

“We are looking at a range of options here, as we have said clearly we said it last week, this is obviously a violation of U.N. resolution 2231,” National Security Council spokesman John Kirby told reporters on a conference call. The U.N. resolution endorsed the Iran nuclear deal.

“Let’s not forget at its core, this is a regime in Tehran that is openly and willingly making themselves an accomplice to the murder of Ukrainians,” Kirby added.

The resolution prohibits the transfer “of all items, materials, equipments and goods and technology” from Iran to another nation unless it is approved in advance by the U.N. Security Council on a case-by-case basis.

Moscow has carried out several devastating missile and drone strikes against what Ukraine said were civilian targets and critical infrastructure such as energy facilities.

Iran and Russia’s representatives at the United Nations have sharply denied reports that Tehran supplied Moscow with a fleet of drones for use in Ukraine. The Kremlin has repeatedly denied that it uses Iranian-made drones to target residential and other high civilian areas.

No ships will sail Wednesday under the Black Sea Grain Initiative

A port in the city of Odesa, Ukraine, on July 29 2022. The first shipment of grain exports from Ukraine in months comes after Turkey and the United Nations brokered an agreement between Ukraine and Russia to allow for the resumption of key exports from Ukraine, such as grain and fertilizer.

The organization overseeing the export of Ukrainian agriculture said that no vessels will sail by way of the Black Sea Grain Initiative on Wednesday.

The Ukrainian, Turkish and United Nations delegations “agreed not to plan any movement of vessels” due to Russia’s decision to suspend its participation in the program.

Amir Abdulla, the U.N. Coordinator for the Black Sea Grain Initiative, said he is in close cooperation and consultation with all signatories of the deal to resume full participation.