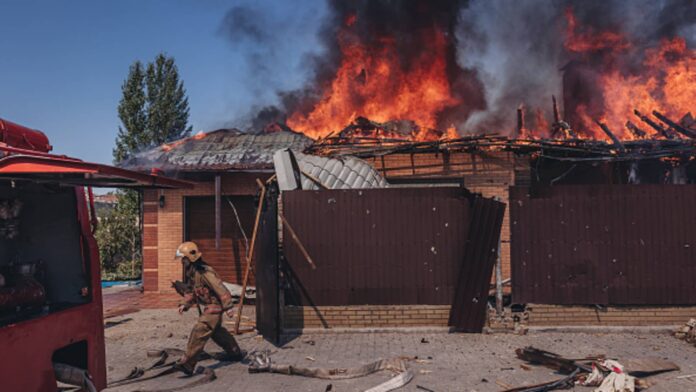 The first grain ship to leave Ukraine in months has arrived safely in Turkish waters, where it will be inspected before it continues its journey to Lebanon.

The shipment comes after a deal was brokered between Russia and Ukraine by Turkey and the United Nations to allow vital exports to resume from the country after a blockade that contributed to global shortages of wheat and cooking oil, of which Ukraine is a major producer and exporter.

The ship was carrying more than 26,000 tonnes of corn and is due to undergo an inspection in Istanbul before continuing to Tripoli.

An aerial view of Sierra Leone-flagged dry cargo ship Razoni which departed from the port of Odesa Monday, arriving at the Black Sea entrance of the Bosporus Strait, in Istanbul, Turkey, on August 3, 2022.

The U.N.-led Joint Coordination Centre requested that all parties inform their militaries of the ship’s movements in order to ensure its safe passage from Ukraine through the Black Sea, where much of the coast has been mined by both Russia and Ukraine amid the invasion, to Turkish waters in the Bosporus.

The agreement, which was reached after much negotiation between the warring countries, has been hailed as a rare success for international diplomacy, with some officials hoping it could be built upon to potentially reach a cease-fire.

U.N. Secretary-General Antonio Guterres said Monday after the merchant vessel, the Razoni, left the port of Odesa that it “was loaded with two commodities in short supply: corn and hope.”

“Hope for millions of people around the world who depend on the smooth running of Ukraine’s ports to feed their families. The ship’s departure is the first concrete result of the Black Sea Grain Initiative. It has been a long journey since I presented the proposal to the leaders of the Russian Federation and Ukraine at the end of April,” he said. The Razoni’s departure was, he added, an “enormous collective achievement.”

Ukrainian President Volodymyr Zelenskyy has said the situation in the Donbas in eastern Ukraine, the epicenter of the war in Ukraine, is “just hell.”

Describing Russia’s “fire superiority” in his nightly video message, Zelenskyy said Ukraine’s forces “still cannot completely break the advantage of the Russian army in artillery and in manpower, and this is very felt in the battles, especially in Donbas – Pisky, Avdiyivka, other directions.”

“It’s just hell. It can’t even be described in words,” he added.

Firefighters try to put out a fire after the Russian shelling of a house in Bakhmut in Donetsk, Ukraine, on July 27, 2022.

With intense fighting in the Donbas, Ukraine has ordered residents in one of its constituent regions, Donetsk, to evacuate while Kyiv discusses the need for more weapons with its international allies. NATO Secretary-General Jens Stoltenberg spoke with President Zelenskyy about more military aid for Ukraine, tweeting Wednesday that “it’s vital that NATO and allies provide even more assistance to Ukraine even faster.”

People board the evacuation train from the Donbas region to the west of Ukraine, at the train station in Pokrovsk, on August 2, 2022.

He said that the two also discussed the first shipment of grain since Russia’s late February invasion and subsequent naval blockade of Ukrainian ports.

Zelenskyy also commented on the initial success of the Black Sea Grain Initiative, a deal between Russia and Ukraine, Turkey and the United Nations, to enable the resumption of exports of vital produce from Ukraine by sea.

“Our goal now is to have regularity: so that when one ship leaves the port, there should be other ships as well – both those loading and those on the approach to the port. Continuity and regularity is the necessary principle. All consumers of our agricultural products need it,” he said.

Two Republican senators have proposed amendments on the vote to add Sweden and Finland to NATO.

Sens. Rand Paul, R-Ky., and Dan Sullivan, R-Alaska, both are seeking changes to the treaty vote as Congress prepares to head into recess.

Paul told NBC News that his amendment states that “nothing in the Article Five portion of the NATO Treaty supersedes the congressional directive that we have to declare war.” The NATO provision holds than an attack on one member of the alliance is an attack on all members.

Sullivan told NBC News that his amendment states that every member of NATO, to now include Sweden and Finland, should commit to the 2% of GDP spending on defense goal established at the 2014 NATO Wales Summit.

The vote to include Sweden and Finland in NATO is expected to overwhelmingly pass.

Below is the State Department’s fact sheet of imposed penalties on the following Russian oligarchs:

“We are also imposing additional costs on Russia’s war machine by designating 24 Russian defense and technology-related entities,” Blinken wrote in a statement.

“Russia has systematically focused on exploiting high-technology research and innovations to advance Moscow’s war-fighting capabilities – the same defense capabilities that Russia’s military is using in its vicious attacks hitting Ukraine’s population centers and resulting in the deaths of civilians, including children,” he added.

March was the deadliest month of Russia’s war in Ukraine, UN says

The United Nations Human Rights Office of the High Commissioner said that March was so far the deadliest month in Russia’s war in Ukraine.

There were more than 3,100 civilian casualties and 2,400 injuries due to the conflict in March, according to data compiled by the UN.

Total civilian casualties from 24 February to 31 July 2022 as compiled by the United Nations.

The United Nations has confirmed 5,327 civilian deaths and 7,257 injuries in Ukraine since Russia invaded on Feb. 24.

“Most of the civilian casualties recorded were caused by the use of explosive weapons with wide area effects, including shelling from heavy artillery, multiple launch rocket systems, missiles and air strikes,” the UN office wrote in a report.

The human rights office added that the majority of casualties and injuries were reported in the Donetsk and Luhansk regions.

3 reasons why executives are leaving retailers from GameStop to Gap