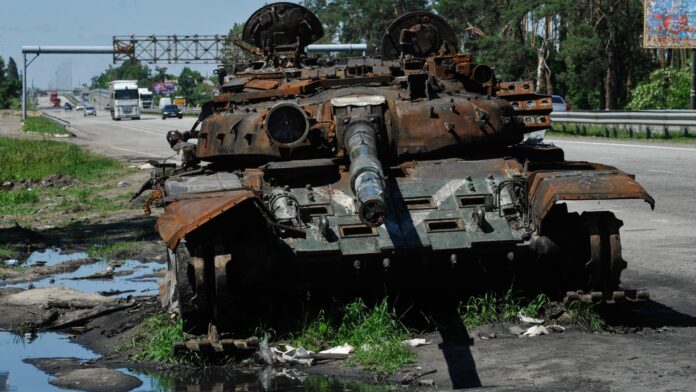 Smoke and dirt rise in the city of Severodonetsk during fighting between Ukrainian and Russian troops in the eastern Ukrainian region of Donbas on June 2, 2022.

That indicates gains for Ukrainian forces as the city was about 70% controlled by Russians two days ago, the official said. Haidai also said Russian occupiers lost a huge number of personnel and eight Russians were taken prisoner.

CNBC was not able to immediately confirm the report. The situation on the ground in Ukraine changes quickly.

Several explosions were heard in Ukraine’s capital Kyiv after missile strikes on infrastructure, the city’s mayor said according to an NBC News translation.

Mayor Vitaliy Klychko said one person was sent to the hospital and that services were already working on the affected sites.

The mayor of another city in the region, Brovary, also urged residents to remain calm and in safe places after reports of enemy fire in the area.

CNBC was not able to confirm the report. Military developments on the ground remain difficult to confirm in a rapidly shifting situation.

Ukrainian forces in the contested eastern city of Sieverodonetsk have been facing off against Russian-led Separatist Forces originating from Luhansk, the U.K.’s Ministry of Defence said.

The ministry said these forces are poorly equipped and trained and lack heavy equipment, as compared with regular Russian units. It said using proxy troops is a Russian tactic that was previously seen in Syria and suggests a desire to limit casualties among Moscow’s own forces.

CNBC was not able to immediately confirm the troop movements. Military developments can be difficult or impossible to confirm in the fluid situation on the ground.

The Federal Reserve’s inflation fight and the U.S. housing market

Credit scores are at an all-time high, despite rising consumer debt