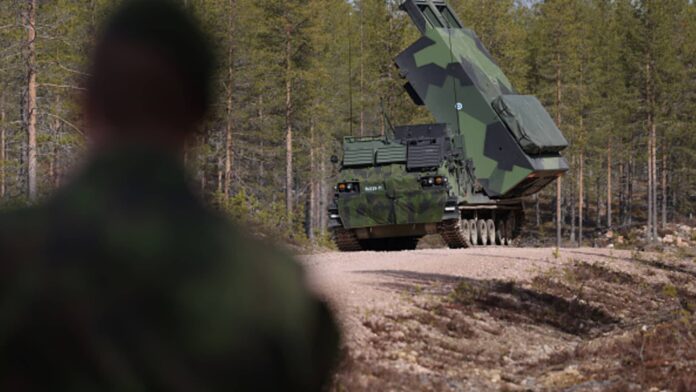 Smoke and dirt rise in the city of Severodonetsk during fighting between Ukrainian and Russian troops in the eastern Ukrainian region of Donbas on June 2, 2022.

Heavy fighting is continuing around the contested town of Severodonetsk in eastern Ukraine, Britain’s Ministry of Defense said in its daily intelligence update.

In addition, Russian forces continue to push toward Sloviansk as part of their attempted encirclement of Ukrainian forces, the ministry said.

Russian forces are also likely to have moved multiple air defense assets to Snake Island in the western Black Sea in order to provide protection for its ships operating in the area, according to the ministry. That follows the loss of the flagship Moskva cruiser in April.

“Russia’s activity on Snake Island contributes to its blockade of the Ukrainian coast and hinders the resumption of maritime trade, including exports of Ukrainian grain,” the U.K. said.

Zelenskyy went to Lysychansk and Soledar in Ukraine’s east, where Russia is using indiscriminate rocket and artillery attacks against wide areas. The cities are in Luhansk and Donetsk, respectively.

The Ukrainian president earlier visited Zaporizhzhia, Sky said. That city is on the Dnipro River, near the southern front facing Russian troops.

Video circulating on Twitter claimed to show Zelenskyy visiting positions near Lysychansk, where he handed out commendations to Ukrainian soldiers.

CNBC was unable to confirm the veracity of that video.

The UK will supply Ukraine with multiple-launch rocket systems

An M270 MLRS heavy rocket launcher on May 23, 2022. Britain is sending Ukraine multiple-launch rocket systems that can strike targets up to 50 miles away — in a coordinated response with the U.S. to Russia’s invasion, Reuters reported.

Britain is sending Ukraine multiple-launch rocket systems that can strike targets up to 50 miles away — in a coordinated response with the U.S. to Russia’s invasion, Reuters reported.

“These highly capable multiple-launch rocket systems will enable our Ukrainian friends to better protect themselves against the brutal use of long-range artillery, which (Russian President Vladimir) Putin’s forces have used indiscriminately to flatten cities,” Defense Secretary Ben Wallace said in a statement, according to Reuters.

The U.S. also said last week it is supplying Ukraine with High Mobility Artillery Rocket Systems. Rockets from the HIMARS can travel more than 43 miles, according to the U.S. army.

The U.K. said Ukrainian forces will be trained on how to use the new systems in Britain, according to Reuters.

About 800 people are hiding in bomb shelters under chemical plant in Severodonetsk, regional governor says

People from Severodonetsk are seen on a van that will take them to Kramatorsk. Severodonetsk, the largest city under Ukrainian control in Luhansk province, has come under intense artillery and missile strikes from the Russian army.

Roughly 800 people are hiding across several bomb shelters located underneath the Azot chemical factory in Severodonetsk, the head of the Luhansk region military administration told CNN.

“There are locals there, who were asked to leave the city,” Serhiy Haidai told the news outlet. “But they refused. There are also children there, but not many of them.”

NBC News could not immediately verify the claims.

Regional Ukrainian officials later said that Russian forces fired on the Azot factory and hit an administrative building and a warehouse where methanol was stored, CNN reported.

Severodonetsk is now split between Russian and Ukrainian control, Haidai said, according to an NBC News translation.

Several explosions were heard in Ukraine’s capital Kyiv after missile strikes on infrastructure, the city’s mayor said, according to an NBC News translation.

Mayor Vitaliy Klychko said one person was sent to the hospital and that services were already working on the affected sites.

The mayor of another city in the region, Brovary, also urged residents to remain calm and in safe places after reports of enemy fire in the area.

CNBC was not able to confirm the report. Military developments on the ground remain difficult to confirm in a rapidly shifting situation.

Russian President Vladimir Putin attends the plenary session of the First Eurasian Economic Forum in Bishkek, via video link from Moscow, Russia May 26, 2022.

Russian President Vladimir Putin issued a broad warning to the West that his military will strike new targets if the U.S. starts supplying Ukraine with longer-range missiles, the TASS news agency reported.

Putin said in an interview aired on the Russia-1 TV channel that if those weapons are supplied: “We will draw the relevant conclusions and take our own means of attack, which, for the purpose of hitting the objects which we have not been hitting so far, we have enough of.”

Putin did not elaborate on what targets he would attempt to strike.

Ukrainian officials have been asking the West for weeks to send advanced, longer-range rocket systems to aid them in the war. Officials in Washington have had to weigh the benefits of sending the weapons with the risk of provoking Putin into committing further atrocities.