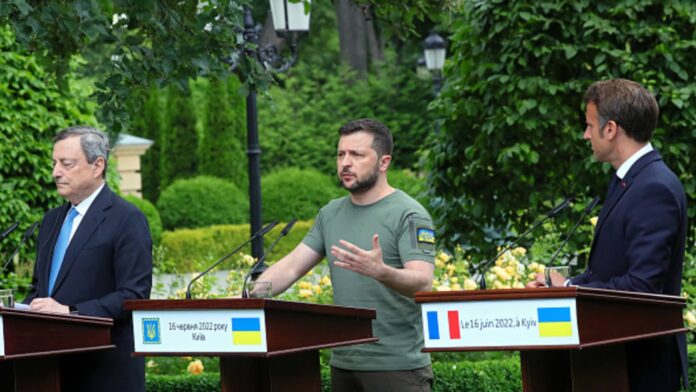 Ukraine President Volodymyr Zelenskyy has hailed the EU’s recommendation to provide candidacy status to Ukraine a landmark move that will help Kyiv to defeat Russia’s onslaught.

Zelenskyy said he expects EU government leaders to approve the proposal in Brussels next week.

The European Commission, the executive arm of the EU, has proposed that Ukraine be given candidate status for EU membership.

The recommendation comes on the proviso that Ukraine carries out a number of important reforms.

European Commission President Ursula von der Leyen said Ukraine should be welcome as a candidate country — referring to a legal term that means a nation has officially started an accession path to full membership.

Wearing a yellow blazer over a blue shirt to represent Ukraine’s colors, von der Leyen said at a press conference that the commission had one clear message for Kyiv. “And that is, yes, Ukraine deserves [the] European perspective. Yes, Ukraine should be welcomed as a candidate country.”

The European Commission, the executive arm of the European Union, will meet on Friday to offer its fast-tracked opinion on whether to grant Ukraine candidacy status.

The discussion comes just 24 hours after some of the bloc’s most powerful leaders visited Ukraine’s capital city of Kyiv in a show of solidarity with the war-ravaged country.

The opinion given on Friday is widely expected to serve as the basis for talks at next week’s EU summit in Brussels, Belgium. Candidacy status is not the same as EU membership — a process that could take several years to complete.

Standing alongside Ukraine’s President Volodymyr Zelenskyy on Thursday, French President Emmanuel Macron said that France, Germany, Italy and Romania were all in favor of “immediate” candidacy status for Ukraine.

Few residents remain in the Lysychansk as it experiences frequent shelling from Russian troops who are in a fierce battle for Severodonetsk, which sits across the river.

Serhiy Haidai, the head of Luhansk’s regional administration region who has become a well-known voice amid severe fighting in the Donbas region, has said the number of shellings by Russian forces is “rising daily.”

“The Russians continue to destroy the region’s infrastructure,” Haidai said via Telegram, according to a translation.

“Thus, the shelling of the buildings of the Severodonetsk Plant of Chemical Non-Standardized Equipment was recorded, and the building of the Azot plant was damaged. In general, there are almost no [surviving] administrative buildings on the territory of the chemical plant giant,” he added.

Haidai said that over the last 24 hours, Russian forces had used artillery and multiple rocket launchers in the districts of Severodonetsk, Lysychansk, Ustynivka, Loskutivka, Metolkino, Borivsky, Mykolaivka and Novozvanivka, among others.

A Ukrainian military vehicle drives to the front line during a fight, amid Russia’s invasion in Ukraine, near Izyum, Kharkiv region, Ukraine, April 23, 2022.

The State Department is aware of reports that a total of three U.S. citizens have gone missing in Ukraine but could not verify if they were in Russian custody.

“There are reports of one additional American whose whereabouts are unknown. I can’t speak to the specifics of that case. Unfortunately, we don’t know the full details,” State Department spokesman Ned Price said during a daily press briefing.

“Similarly, our understanding was that this individual has traveled to Ukraine to take up arms,” Price added.

Price’s comments come on the heels of various media reports that Alexander Drueke, 39, and Andy Huynh, 27, two former American service members, were captured by Russian forces in Kharkiv last week. Those reports and details have not been confirmed by CNBC or NBC News.

Price told reporters that so far the Biden administration has not seen any evidence that Russian forces have detained Americans.

“At this moment, we have seen the open press reports, the same reports that you all have seen, but we don’t have independent confirmation of their whereabouts,” Price said.

Global prices for some grains have spiked since the Russia-Ukraine war started, with both countries contributing a significant percentage of the world’s supply for some of those commodities such as wheat.

U.S. Secretary of Agriculture Tom Vilsack said Russia’s blockade of Ukraine’s ports will lead to food shortages as well as higher food prices across the globe.

“The failure of Russia to allow and enable the ports to be opened and available is obviously causing some significant disruption to the extent that the grain, nearly 20 million metric tons, can’t get into the market,” Vilsack told reporters at the United Nations.

He added that potential shortages will likely trigger “unrest and instability” in countries in North Africa and the Middle East.

Vilsack called on Russia to negotiate in good faith with international parties looking to create food corridors out of Ukraine.

A third of Sudan’ population is currently facing a food crisis due to the compounded impact of climate shocks, political turmoil and rising global food prices, the U.N. food agency said.

A joint report by the World Food Program and the Food and Agriculture Organization said that 15 million people face acute food insecurity across all of the East African country’s 18 provinces.

Living conditions rapidly deteriorated across cash-strapped Sudan since an October military coup sent an already fragile economy into free-fall, with the Russian invasion of Ukraine compounding the economic pain.

Funding levels fall short of meeting humanitarian needs in Sudan, where 40% of the population is expected to slip into food insecurity by September, the report said.