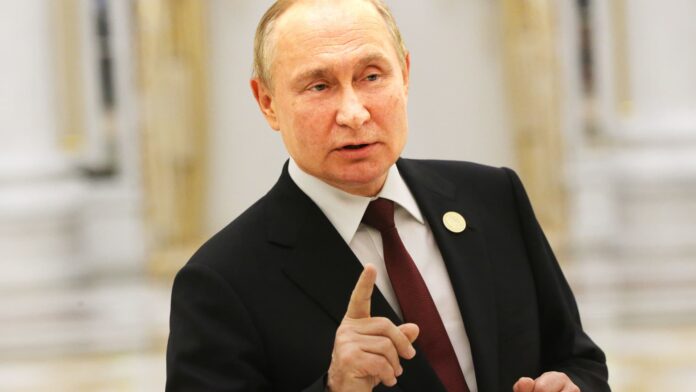 Ukrainian officials said that Russian troops have evacuated Snake Island, a remote island off the south of Ukraine that was occupied by Russian forces on the first day of the invasion.

Russia’s Ministry of Defense also confirmed the withdrawal has taken place from the island, which is locally known as Zmiinyi Island, describing it as an act “of goodwill.”

Andriy Yermak, President Zelenskyy’s chief of staff, tweeted this morning that there were no Russian troops on Snake Island anymore while an official message from Ukraine’s southern operational command said Russian forces had “hastily evacuated” the island which is a strategic outpost in the Black Sea.

“During the night, as a result of the successful next stage of the military operation with strikes by our missile and artillery units on Snake Island, the enemy hastily evacuated the remnants of the garrison with two speed boats and, presumably, left the island,” the operational command said on Facebook.

It added that currently, Snake island “is covered in fire, explosions are heard” with the final outcome of the operation still being investigated.

In a briefing by Russia’s Ministry of Defense on Thursday, it confirmed the withdrawal, stating:

“On June 30, as a step of goodwill, the Armed Forces of the Russian Federation completed the fulfillment of their tasks on Zmeiny Island and withdrew the garrison stationed there.”

It said the move “demonstrated to the world community that the Russian Federation does not hinder the efforts of the UN to organize a humanitarian corridor for the export of agricultural products from the territory of Ukraine.”

Russia said the decision “will not allow Kyiv to speculate on the impending food crisis, referring to the impossibility of exporting grain due to Russia’s total control of the northwestern part of the Black Sea.”

It said it was “now it is up to the Ukrainian side” to clear the Black Sea coast of mines — which both sides have accused each other of planting in the sea, and blaming these for hindering exports of vital produce.

Ukraine’s forces must avoid being encircled by Russians, UK says

Britain’s Ministry of Defense has given its latest intelligence update on the state of fighting in Ukraine, noting that the country’s armed forces continue to hold their positions in the city of Lysychansk following their withdrawal from Severodonetsk.

Russian forces, meanwhile, continue to pursue an approach of “creeping envelopment” from the Popasna direction, due south from Lysychansk, removing the need to force a major new crossing of the Siverskyi Donets river (which separates Severodonetsk from Lysychansk), the U.K. noted in its update on Twitter on Thursday.

The ministry said it is highly likely “that Ukrainian forces’ ability to continue fighting delaying battles, and then withdraw troops in good order before they are encircled, will continue to be a key factor in the outcome of the campaign.”

Current ground combat is likely focused around the Lyschansk oil refinery, 10 kilometers southwest of the city center, the U.K. added, backing up similar information from Ukraine’s armed forces this morning.

“At the operational level, Russian forces continue to make limited progress as they attempt to encircle Ukrainian defenders in northern Donetsk province via advances from Izium.”

Ukrainian soldiers in the eastern Luhansk region on June 23, 2022. On Wednesday, Serhiy Haidai, the governor of the Luhansk region where the fighting is most severe, said that the city of Lysychansk is under “constant shelling.”

While global attention has been on the NATO summit taking place this week in Spain, in Ukraine, the battle for control of the Donbas in the east continues to rage.

On Wednesday, Serhiy Haidai, the governor of the Luhansk region where the fighting is most severe, said that the city of Lysychansk is under “constant shelling.”

“Orcs are constantly trying to storm Lysychansk, fighting continues on the outskirts, the city itself is under constant fire,” Haidai said in a post on Facebook last night. Ukrainian officials regularly describe Russian fighters as “orcs” after the brutish characters in J.R.R. Tolkien’s “Lord of the Rings.”

Lysychansk is the twin city across the Siverskyi Donets river from Severodonetsk, which was seized by Russian forces last weekend after a tactical retreat by Ukrainian fighters. Haidai said around 15,000 civilians remain in Lysychansk although a “quiet,” inconspicuous evacuation is taking place.

In its latest military update on the Russian invasion on Thursday morning, the General Staff of the Armed Forces of Ukraine said Thursday that Russian troops are carrying out attacks and “battles are ongoing” in the area of the Lysychansk oil refinery.

“In Donetsk direction, the enemy, with the support of artillery, is trying to block the town of Lysychansk and take control of a section of Lysychansk-Bakhmut highway,” Ukraine said, adding that Russian forces were firing at civilian infrastructure in nearby settlements.

Russian forces are heavily focused on gaining territory in the Luhansk and Donetsk regions that are part of the wider Donbas in east Ukraine. It is Russia’s expressed aim to control the territory, where two pro-Russian separatist “republics” are located.

Russian President Vladimir Putin reiterated on Wednesday that the so-called “liberation” of the Donbas was his main goal, as well as “the protection of these people [in the pro-Russian areas], and the creation of conditions that would guarantee the security of Russia itself.”

‘Everything was going fine between us’: Putin expresses dismay at NATO expansion

“There’s nothing that might concern us in terms of Finland and Sweden becoming NATO members. If they want to then please, go ahead,” Russian President Vladimir Putin said on Wednesday.

President Vladimir Putin has said Russia will “respond in kind” if NATO infrastructure and troops are deployed in Sweden and Finland when they join the alliance.

“There’s nothing that might concern us in terms of Finland and Sweden becoming NATO members. If they want to then please, go ahead,” he said on Wednesday.

“But they should clearly understand they didn’t face any threats before this. Now, if NATO infrastructure and troops are deployed we will be compelled to respond in kind and create the same threats for the territories where the threats towards us are created,” he added.

“It’s obvious — don’t they understand that? Everything was going fine between us but now there will be tensions. This is obvious and inevitable.”

Putin’s comments came as NATO leaders and their allies met in Madrid on Wednesday. At the summit, the alliance pledged to strengthen their support for Ukraine and called Russia a “direct threat” to its security. It also formally welcomed Sweden and Finland — historically non-aligned countries — to join the alliance.

The leaders of both Nordic countries said Russia’s invasion of Ukraine changed the dial for them when it came to deciding to apply to join NATO. Russia is aggrieved by the expansion as its land border with NATO territories will now roughly double. It has a 830-mile border with prospective member Finland and borders five other NATO members: Latvia, Estonia, Lithuania, Poland and Norway.

Russia has not shown meaningful attempt at diplomacy, Blinken says at NATO

US Secretary of State Antony Blinken speaks about US policy towards China during an event hosted by the Asia Society Policy Institute at George Washington University in Washington, DC, on May 26, 2022.

Secretary of State Antony Blinken said that the U.S. has not seen meaningful Russian diplomacy in ending the war in Ukraine.

“We have not seen any interest on the part of Vladimir Putin in engaging in any kind of meaningful diplomatic initiative,” Blinken said during the NATO Madrid Summit. “But in any event, as we’ve said from the start, it’s really important that the Ukrainians define the terms of any potential negotiation,” he added.

America’s top diplomat said that the U.S. will continue to send security assistance to Ukraine in order to mitigate and repel Russian aggression.

‘If Russia is not stopped in Ukraine, NATO will inevitably be drawn into the war,’ Ukrainian official warns

A Ukrainian serviceman talks by phone as he walks through the rubbles of a building of the Polytechnic Sports Complex of the Kharkiv National Technical University after it was hit by Russian missile in Kharkiv on June 24, 2022, amid Russian invasion of Ukraine.

Ukrainian official Andriy Yermak said that Russia will most likely push its war beyond Ukraine’s borders into NATO-member territory, according to an NBC News translation.

“History has taught us that the aggressor’s appetites grow with each concession,” Yermak, the head of the office of Ukrainian President Volodymyr Zelenskyy, said on the Telegram messaging app.

“That is why the security of not only Europe but all of humanity is under threat. And we believe that if Russia is not stopped in Ukraine, NATO will inevitably be drawn into the war,” he said, calling for more weapons and ammunition for Ukrainian forces.

“Russia is increasingly convinced that it cannot defeat Ukraine on the battlefield. That is why they increasingly resort to bloody terror and the killing of civilians and the destruction of civilian infrastructure,” he added.

Biden thanks Erdogan for allowing Finland and Sweden to join NATO

Turkish President Tayyip Erdogan addresses members of his ruling AK Party (AKP) during a meeting at the parliament in Ankara, Turkey May 18, 2022. Murat Cetinmuhurdar/Presidential Press Office/Handout via REUTERS THIS IMAGE HAS BEEN SUPPLIED BY A THIRD PARTY. NO RESALES. NO ARCHIVES. MANDATORY CREDIT

“I want to particularly thank you for what you did putting together with the situation with regard to Finland and Sweden and all the incredible work you’re doing to try to get grain out of Ukraine, I was telling you, you’re doing a great job. I want to thank you,” Biden said alongside his Turkish counterpart.

Erdogan thanked Biden for renewed U.S. commitment to strengthening NATO and said the alliance will have to work together to resolve the mounting food crisis, Russian naval blockade of Ukraine’s ports and issues related to oil and natural gas.

Ukraine’s government has released footage showing the missile that hit the Amstor shopping mall in the city of Kremenchuk in central Ukraine on Monday, a strike that killed at least 20 people and injured 59 others.

The video, which shows CCTV footage from a machinery plant near the mall on Monday, was shown in Ukraine’s President Zelenskyy nightly address on Tuesday, and posted on Facebook.

CNBC has not been able to independently verify that the missile is a Kh-22 as stated in the tweet, and has been stated by several Ukrainian officials.

Kh-22 missiles are large, long-range anti-ship missiles that were developed by the Soviet Union and first used in the early 1960s, intended for use against U.S. Navy aircraft carriers in the Cold War.

The strike on the shopping mall was condemned as a war crime by Western leaders. For its part, Russia said it was targeting a depot of weapons donated by the U.S. and Europe that it said was located near the mall, a claim dismissed by Ukraine.

Musk encourages independents to vote Republican ahead of midterms