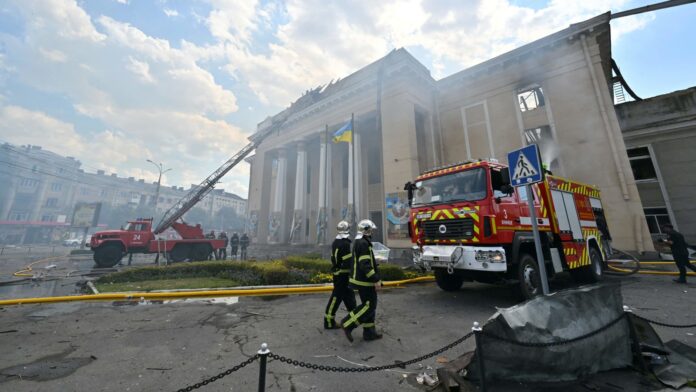 More than 2.5 million people have been evacuated from Ukraine to Russia: UK

More than 2.5 million people have been evacuated from Ukraine to Russia, Britain’s Ministry of Defense wrote in its latest intelligence update, with many of those evacuees suspected to have been forcibly deported.

“Russia continues to face accusations that it is forcibly deporting Ukrainians; in many cases Ukrainians have reportedly been mistreated in filtration camps set up by Russia,” the ministry wrote on Twitter.

In recent years, Moscow has given Russian passports to tens of thousands of people in eastern Ukraine. While some people have willingly gone to Russia, there is witness evidence of forced removals of Ukrainians, including children, who have described brutal conditions in Russia’s “filtration camps.”

U.S. Secretary of State Antony Blinken said the U.S. suspects that between 900,000 and 1.6 million Ukrainian citizens, including 260,000 children, have been detained and deported from their homes to Russia.

The U.S., European Union states, Canada, Australia, Mexico and several others are among 45 states that signed a political declaration to work together to prosecute Russian war crimes in Ukraine.

There are some 23,000 war crimes investigations already open, and countries needed to coordinate to ensure the provision of sufficient evidence, organization, and to avoid overlapping on cases. Different countries are heading different investigations, and together the group will train Ukrainian prosecutors and increase the number of forensic workers in Ukraine.

Exterior view of the International Criminal Court in The Hague, Netherlands.

“The simple truth is that, as we speak, children, women and men, the young and the old, are living in terror,” ICC Prosecutor Karim Khan said.

Khan stressed “a need of coordination, coherence” and the need for an “overarching strategy” among the countries taking part.

“Meaningful justice can only be achieved if we work together. Today we commit to set a new standard for cooperation, strengthening our efforts towards accountability globally,” Khan said during the Ukraine Accountability Conference at the Hague.

Death toll rises to 23, more than 110 people injured in Vinnytsia

LUHANSK, UKRAINE – JULY 09: A view of damaged sites from eastern Ukraine city of Severodonetsk located in which Russian forces now in control, in Luhansk Oblast, Ukraine on July 09, 2022. (Photo by Stringer/Anadolu Agency via Getty Images)

The death toll from an attack in the central Ukrainian city of Vinnytsia rose to 23 people, including three children, according to Ukraine’s emergency service.

The service added that 117 people need medical attention. Thirty-four of those people are in serious condition and 5 people are in critical condition. Search and rescue teams are still looking for at least 39 people in the rubble.

Earlier in the day, Ukrainian President Volodymyr Zelenskyy described the cruise missile attack on the community facilities and medical center as an “act of Russian terror.”

Secretary of Defense Lloyd Austin thanked his Italian counterpart at the Pentagon for bolstering NATO’s eastern flank along with the country’s “expansive contributions to international security.”

Italy’s Minister of Defense Lorenzo Guerini and Austin agreed to maintain close cooperation “particularly during these challenging times that have proven the importance of the transatlantic relationship,” according to a Pentagon readout of the meeting.

The two also discussed “how the United States and Italy could increase defense cooperation activities in Africa.”