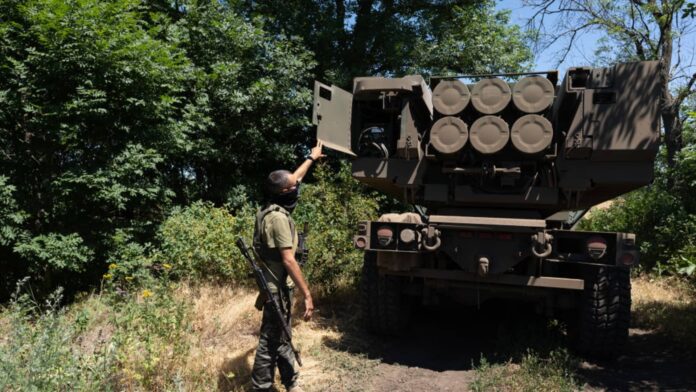 Russia continues to commit what are nominally six separate armies to its Donbas offensive, according to the latest intelligence update from the British Ministry of Defence, that noted Tuesday that at full strength, before the invasion, these formations were established for around 150,000 personnel.

In recent weeks, Russia has often operated with company-sized groupings of around 100 personnel when undertaking offensive operations in any one sector at a time, the ministry noted.

Nonetheless, Russia has struggled to sustain effective offensive combat power since the start of the invasion and this problem is likely becoming increasingly acute, it added.

“As well as dealing with severe under-manning, Russian planners face a dilemma between deploying reserves to the Donbas or defending against Ukrainian counterattacks in the southwestern Kherson sector.”

Given that Russia’s stated immediate policy objective is to seize all of Donetsk in the Donbas, while Russia may still make further territorial gains, its operational tempo and rate of advance is likely to be very slow, the U.K. said, “without a significant operational pause for reorganisation and refit.”

Himars from the U.S. are helping to stabilize frontline, Ukraine military official says

Ukraine’s top military commander said that the “timely arrival of M142 Himars” from the U.S. is helping Ukrainian forces to withstand Russian attacks on the frontline in the Donbas.

Himars are long-range multiple launch rocket systems and are seen as a potential game-changer in Ukraine’s resistance, and fightback, against Russia’s near-constant artillery, battering cities and towns in Donetsk, a region of the Donbas.

In a Telegram post on Monday, General Valery Zaluzhny said the weapons were allowing his forces to “stabilize the situation.”

“It is complex, intense, but completely controlled. An important factor contributing to our retention of defensive lines and positions is the timely arrival of M142 HIMARS, which deliver targeted strikes on enemy control points, ammunition and fuel storage depots,” he said.

Russian President Vladimir Putin is set to meet his Turkish counterpart Recep Tayyip Erdogan in Iran later today with the resumption of Ukrainian grain exports one of the main talking points.

Kremlin aide Yuriy Ushakov said Putin and Erdogan will “discuss key issues of Russian-Turkish cooperation, the implementation of flagship projects in the trade and economic area, as well as give an in-depth consideration to some international issues, including the situation around Ukraine and the export of Ukrainian grain,” Russian state news agency Tass reported Tuesday.

The issue of creating a grain corridor from Ukraine, which has seen its ships blockaded and its grain exports unable to leave the country via the Black Sea, is a major one as global food prices rise.

Representatives from Turkey, Russia, Ukraine and the U.N. held talks last week that appeared to have gone in the right direction with a deal said by Ukraine to be in sight.

Turkish Defense Minister Hulusi Akar appeared confident that more progress could be made this week, saying Monday that the sides could sign a final document agreeing to the creation of a coordination center to manage and oversee the resumption of grain exports.

Russia is seeking payment in United Arab Emirates dirhams for oil exports to some Indian customers, according to Reuters.

Reuters said it has seen an invoice showing the bill for the supply of oil to one refiner in dollars while payment was requested in dirhams.

Russian oil major Rosneft is pushing crude through trading firms into India, according to the news agency.

That comes after the slew of Western sanctions prompted oil importers to shun Moscow, causing spot prices for Russian crude to fall to record discounts against other grades. Indian refiners bought exports at heavily discounted prices, and Russia replaced Saudi Arabia as the second-biggest oil supplier to India after Iraq for the second month in a row in June, said Reuters.

“They took him to an unknown destination,” Energoatom stated on the Telegram messaging platform. “It is still impossible to locate Kvashnin,” the company added.

A Ukrainian serviceman inspects the ruins of Lyceum building, suspected to have been destroyed after a missile strike near Kharkiv on July 5, 2022, amid the Russian invasion of Ukraine.

Ukraine’s Air Force wrote on Facebook that Russia’s military has launched about 3,000 missiles over Ukraine.

“These are cruise missiles, aviation missiles of the air-to-surface class, missiles fired from operational-tactical complexes, like the Tochka-U and Iskander, as well as Onyx missiles,” Ukraine’s Air Force wrote on its Facebook page.

Zelenska is expected to deliver a speech on Wednesday at 11 a.m. E.T.

Pelosi invited all members of the House and Senate to attend the address.