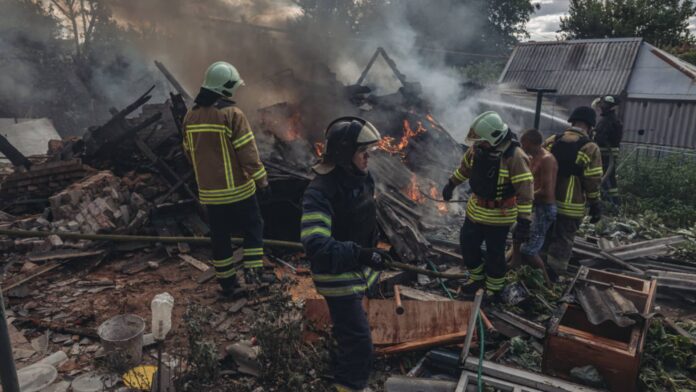 The logo of Finnish dairy-products exporter Valio seen at the company’s offices in St. Petersburg on August 12, 2014. Over the past few months, 140 Finnish companies have reduced business in Russia to one degree or another, Russian state-owned news agency Ria Novosti reported based on an interview with Anton Loginov, trade representative of the Russian Federation in Helsinki.

A Russian trade official said 140 Finnish companies have reduced business in Russia over the past few months.

In an interview with Russian state-owned news agency RIA Novosti, Moscow’s trade representative in Helsinki Anton Loginov said some businesses have sold assets, handed over to local management or closed offices. That’s according to a rough Google translation.

Many Western multinational companies have suspended operations in Russia or left the market altogether since Moscow launched its unprovoked war in Ukraine.

Russians looking to advance on Bakhmut city in Donetsk

Russian forces are conducting military operations in the area surrounding the city of Bakhmut in Donetsk in order to advance on the city and seize the Vuhlehirska thermal power plant, according to the latest report of the General Staff of the Armed Forces of Ukraine published on Facebook Wednesday.

The update comes after the cities of Sloviansk and Kramatorsk, and surrounding towns, near Bakhmut were shelled on Tuesday.

Firefighters try to put out a garage fire caused by shelling in Bakhmut, Ukraine, on July 19, 2022.

All three cities have strategic and symbolic significance for both Ukraine and Russia, being on or near highways and supply routes in Donetsk and Luhansk in the Donbas, as well as routes toward Kharkiv to the north and the capital Kyiv. The cities have also been fought over since 2014 by pro-Russian separatists and Ukrainian forces.

The cities are now at the epicenter of fierce battles between Russia and Ukraine as the former look to advance into Donetsk.

Ukrainian emergency service workers and military personnel try to get bodies out of a house that was shelled in Sloviansk, Ukraine, on July 19, 2022.

On Tuesday, shelling from tanks and artillery was recorded around Sloviansk near Dolyna, Krasnopillia, Kostiantynivka, Chepil, Husarivka, and Adamivka, the spokesperson for Ukraine’s General Staff said, while Russian forces “fired tube and rocket artillery on the areas of Kramatorsk, Siversk, Serebrianka, Hryhorivka” and other towns, with fighting continuing.

President Vladimir Putin has said Ukraine does not want to pursue peace deal with Russia and that it did not want to fulfill the conditions of an agreement back in March.

Speaking to reporters during his visit to Tehran, Iran, on Tuesday, Putin claimed that talks to reach a peace deal in March during talks in Istanbul had made progress, but that Kyiv had “no desire” to pursue an agreement.

“There were well-known negotiations in Istanbul, when we actually reached an agreement, it only remained to initiate it,” he said, claiming that Russian forces had withdrawn from the area around Kyiv in order to “create these conditions” that would be ripe for a deal but that the government in Kyiv “refused to comply” with the terms of the deal.

“The final result depends, of course, not on the mediators, but on the desire of the contracting parties to fulfill the agreements reached. And we see today that the Kyiv authorities have no such desire,” Putin added.

Ukraine has yet not commented on Putin’s remarks. Preliminary peace talks in March failed to make any breakthrough and Ukraine has said it will not cede any territory to Russia as part of any future deal.

Russian President Vladimir Putin gestures as Iranian Minister of Petroleum Javad Owji (second from left) looks on during the welcoming ceremony at the airport on July 19, 2022, in Tehran, Iran. Putin and his Turkish counterpart Erdogan arrived in Iran for the summit.

Putin met with his Iranian and Turkish counterparts in Iran on Tuesday. Syria was on the agenda for the “Astana troika,” Russia and Iran looked to deepen relations, while Putin and Turkish President Recep Tayyip Erdogan discussed the resumption of grain exports from Ukraine.

“We will facilitate the export of Ukrainian grain, but we proceed from the fact that all restrictions related to possible supplies of Russian grain for export will be lifted. We agreed on this initially with international organizations … No one has objected so far, including our American partners. Let’s see what happens in the near future,” he said.

Zelenskyy thanks the U.S. and ‘every American family’ for their warmth toward Ukraine

U.S. first lady Jill Biden, first lady of Ukraine Olena Zelenska and U.S. President Joe Biden pose for photos as Zelenska arrives on the South Lawn of the White House on July 19, 2022, in Washington, DC. Zelenska is in the United States for a series of high-level meetings and an address to Congress.

Ukraine’s President Volodymyr Zelenskyy has thanked the U.S. for its support for Ukraine as his wife Olena Zelenska continues a visit to Washington this week.

“Increasing American support for Ukraine, additional assistance to protect people from Russian terror, solving humanitarian needs – these are all the tasks of the ongoing visit of the first lady of Ukraine to the United States,” he said in his nightly address on Tuesday evening.

“Today, on the second day of the visit, a meeting at the White House with First Lady Jill Biden – President Biden, Vice President Kamala Harris and her husband came to greet the first lady of Ukraine. I am grateful to the presidential couple of the United States, all representatives of the American Administration and every American family for their warmth towards our country and our people,” Zelenskyy said.

Zelenska also held a meeting with Secretary of State Antony Blinken on Tuesday and visited the memorial for the victims of the Holodomor (also known as the Great Famine) of 1932-1933 in Ukraine in the center of Washington, as well as met representatives of the Ukrainian community in the United States.