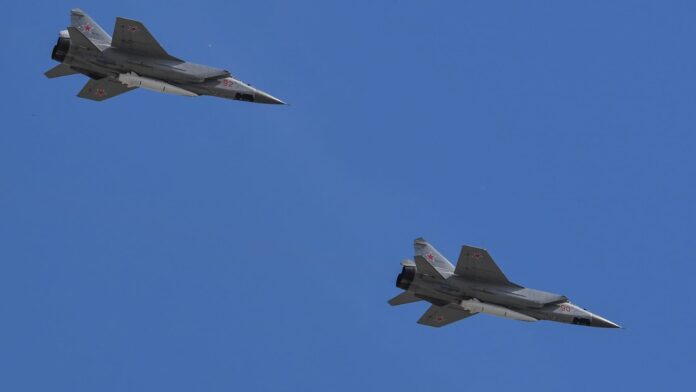 “The depth of the suspected violation into Finnish airspace was one kilometer” over the city of Porvoo on Finland’s southern coast and lasted about two minutes, the ministry’s head of communications Kristian Vakkuri said. Vakkuri added that possible violation happened at 6:40 a.m. GMT on Thursday, or 9:40 a.m. local time, and the jets were flying westward.

The ministry did not say whether the planes were escorted out.

Finland’s air force activated an “operational flight mission,” identifying the MiG jets, and its Border Guard has opened an investigation into the incident, the ministry added.

Finland and Russia share an 800 mile border, and Helsinki has warned of Russian provocations to come as the Nordic country awaits full approval of its NATO membership bid, which upends decades of its historically nonaligned position vis-a-vis Russia.

Kharkiv is one of Ukraine’s most consistently attacked cities, UK says

Kharkiv, Ukraine’s second-largest city, is one of the most consistently shelled cities in the country because it’s directly in Russia’s line of fire, Britain’s Ministry of Defense said in its daily intelligence update on Twitter.

The front line in this area has not moved much since May, the ministry said, but “sitting around 15 km (9.3 miles) from the Russian front line, Kharkiv has suffered because it remains within range of most types of Russian artillery. Multiple rocket launchers and generally inaccurate area weapons have caused devastation across large parts of the city.”

Rescue workers inspect the site of a destroyed hostel as a result of a missile strike in the second-largest Ukrainian city of Kharkiv on Aug. 17, 2022.

On Wednesday, Russian missile strikes on residential areas of Kharkiv killed at least 12 civilians, Ukrainian authorities said. Less than half of the city’s pre-war population of 1.4 million people still remain; the rest have fled to other countries or other parts of Ukraine.

Russian forces “are probably trying to force Ukraine to maintain significant forces on this front, to prevent them from being employed as a counter-attack force elsewhere,” the ministry wrote.

This photo captures Putin’s visit to Beijing in early February 2022. Chinese President Xi Jinping and Russian leader Vladimir Putin are reportedly set to meet at this year’s G-20 summit taking place in Bali, according to a longtime adviser to Indonesian President Joko Widodo.

All G-20 leaders were invited including Putin, despite launching an unprovoked war on Ukraine. Western countries have since called on Indonesia to withdraw its invitation to Putin.

“The International Atomic Energy Agency must be given access to the Zaporizhzhia nuclear power plant as soon as possible and in a manner that respects Ukraine’s full sovereignty to help ensure the safety and security of the plant and monitoring of its nuclear material,” State Department spokesman Ned Price said during a daily press briefing.

“The United States condemns in the strongest terms Russia’s reckless disregard for nuclear safety and security,” Price said, adding that Washington and its allies “call on Russia to cease all military operations at or near Ukraine’s nuclear facilities.”

“Military equipment and personnel should be withdrawn from the plant. Further deployment of forces or equipment to the site must be avoided,” he added.