HomePoliticsLatest Russia news and the war in Ukraine
Politics 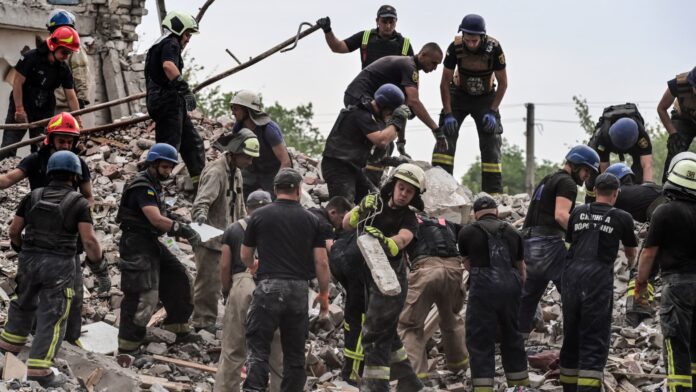 Russia launches a wave of attacks in eastern Ukraine

Russian forces have launched a wave of attacks on various cities in the east of the country and look like they’re preparing to intensify their assaults, Ukraine’s general staff said on Monday.

Russian forces have particularly intensified their assaults around Ukraine’s second-largest city Kharkiv with artillery, rocket launchers and tanks deployed in the city and surrounding areas, Oleksandr Shtupun, the spokesman for the general staff of Ukraine’s armed forces, said on Facebook on Monday.

A view from a school in Kharkiv that was destroyed by a Russian rocket on July 10, 2022.

Shtupun said that in the Donetsk direction, “there are signs of enemy units preparing to intensify combat operations in the Kramatorsk and Bakhmut directions” and that in the area of Sloviansk — a city of the new frontline in Donetsk — various settlements to the north and northwest had been shelled with barrel and jet artillery.

The nearby city of Kramatorsk to the south had not seen active operations, Shtupun said, but towns between Sloviansk and Severodonetsk — the border area between Russian-occupied Luhansk and Donetsk — have been shelled with barrel artillery, Shtupun said.

Le Maire: Russia cutting gas to Europe is one of the key scenarios

“I think that this is one of the key scenarios and we have to be prepared for all options. That’s the responsibility of all politicians to take into account the geopolitical situation,” he said.

In pictures: Rescuers search for victims and survivors of apartment block attack

EDITOR’S NOTE: This article contains an image of search and rescue teams removing human remains from the Chasiv Yar apartment block that was struck by Russian forces.

Firefighters and members look for survivors after the Russian missile strike on the apartment block in Chasiv Yar.

Search and rescue operations are continuing in Chasiv Yar to find victims and survivors of a Russian missile strike on an apartment block. The town lies southeast of Kramatorsk in Donetsk, eastern Ukraine.

At least 15 people died in the attack and the death toll is likely to rise, Ukraine’s President Volodymyr Zelenskyy said on Sunday night.

Firefighters and members of a rescue team carry a body after a building was partialy destroyed following shelling, in Chasiv Yar, eastern Ukraine, on July 10, 2022.

Several dozen people are believed to be trapped under the rubble and residents have been displaced after losing their homes.

Ukrainians salvage the belongings they can after an airstrike on their apartment block in Chasiv Yar, Donetsk Oblast.

Russia has repeatedly said it does not target civilians despite numerous occasions where civilian infrastructure has been hit during the war.

A woman stands in her heaviy damaged apartment after a Russian missile hit her apartment block in Chasiv Yar, Bakhmut District in eastern Ukraine.

Firefighters and members of a rescue team clear the scene after a building was partially destroyed following shelling, in Chasiv Yar, eastern Ukraine, on July 10, 2022.

Ukraine’s President Volodymyr Zelenskyy has said the death toll is likely to rise following a Russian attack on an apartment block in Donetsk at the weekend.

“I have been receiving reports all day today from the city of Chasiv Yar in Donetsk region,” Zelenskyy said in his late night address last night. “There are 15 names on the list of the dead and, unfortunately, this is not the final number.”

“It was a missile strike. And everyone who gives orders for such strikes, everyone who carries them out in our ordinary cities, in residential areas, kills absolutely deliberately,” the president added.

Rescuers clear the scene after a building was partially destroyed following shelling in Chasiv Yar, eastern Ukraine, on July 10, 2022. The building was hit by a Russian Hurricane missile, Pavlo Kyrylenko, governor of the Donetsk region that the Russian army is seeking to conquer, said on July 10, 2022 on Telegram.

Zelenskyy said Ukraine would seek to punish those responsible for the attack, and any others involved in the invasion of Ukraine.

“Since the beginning of this invasion, Ukrainian law enforcement officers have been doing everything necessary to record the crimes of the occupiers and to collect evidence,” he said, adding that Russia should be deemed a terrorist state:

“Russian terror has long crossed the line beyond which it became obvious to many in the civilized world that it is a matter of global security to punish Russia, a terrorist state, for everything it has done against Ukraine and the international legal order.”

Russia has repeatedly said it does not target civilians despite numerous occasions where civilian infrastructure has been hit during the war.

Russia is not taking an ‘operational pause,’ Zelenskyy says

From Ukraine’s perspective, Russia is not taking an “operational pause” from heavy fighting in the Donbas in eastern Ukraine, the country’s president said on Sunday night.

“In the past week, there was a lot of talk about the alleged ‘operational pause’ in the actions of the occupiers in Donbas and other parts of Ukraine,” Zelenskyy said in his nightly address. “Thirty-four airstrikes by Russian aircraft in one past day is an answer to all those who invented this ‘pause’.”

Zelenskyy’s comments come after military analysts said Russia appeared to have made few advances in the Donbas last week; the capture of the entire region is one of Russia’s stated war aims.

But there had been no pause for Ukraine, Zelenskyy said, noting that “the Ukrainian army is holding on, holding firm and repelling assaults in various directions.”

“But, of course, a lot still needs to be done so that Russian losses become such that there will really be a pause. Moreover, the pause is not before new offensives of the occupiers, but before their escape from our Ukrainian native land. And I am grateful to all our fighters who ensure that this time is approaching.”

At least 15 people have been killed and dozens are still trapped after Russian rockets hit a five-storey apartment block in Ukraine’s Donetsk region on Saturday, causing the building to collapse.

Donetsk region Governor Pavlo Kyrylenko said on Telegram that at least 34 people could be trapped under the rubble of the high-rise building in Chasiv Yar, which was struck by Russian rockets late on Saturday.

He said yesterday that five people had been rescued with emergency services communicating with others trapped under the rubble. According to various estimates, there may be another 24 people trapped in the ruins of the building, including a 9-year-old child, Kyrylenko said.

“Rescuers of the State Emergency Service dismantled about 99 tons of destroyed elements of the building.
The rescue operation is ongoing,” he commented.

Andriy Yermak, chief of staff to Ukraine’s president, said on Twitter that Russia “should be on the list of state sponsors of terrorism” following another attack on civilian infrastructure.

Russia has repeatedly denied targeting civilians despite mounting evidence to the contrary and investigators continue to gather evidence of war crimes in Ukraine.

Why the 2022 ‘crypto winter’ is unlike previous bear markets

Peloton’s CFO is leaving the company, will be replaced by Amazon cloud executive