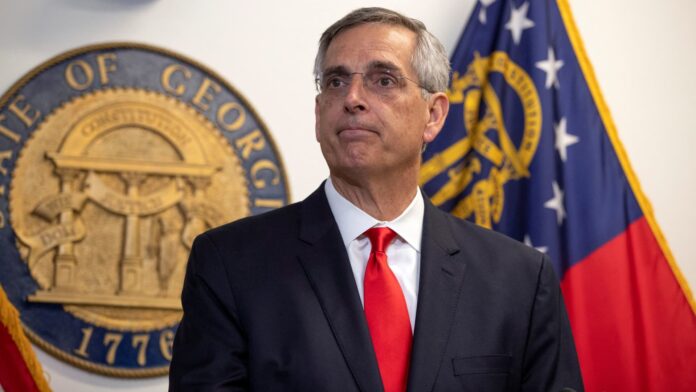 Georgia Secretary of State Brad Raffensperger gives an afternoon update on the Georgia Primary Election at the election command center in Atlanta, Georgia, May 24, 2022.

A Georgia judge on Monday extended to Nov. 14 the deadline for the receipt of absentee ballots in Cobb County for Tuesday’s elections after more than 1,000 people were not mailed such ballots after requesting them.

And Hill ordered that any of the affected voters would be allowed to vote in person, by replacement ballot, or by federal write-in absentee ballot.

The order was agreed to by county election officials after a hearing before Hill on Monday, a day after two civil rights groups sued the board and Georgia state elections officials over the county’s failure to mail absentee ballots to about 1,036 voters from Oct. 13 through Oct. 22.

Hours before the order was issued, the office of Georgia Secretary of State Brad Raffensperger said it was investigating the failure to mail the ballots, calling it “unacceptable.”

“We have opened an investigation and will refer to the State elections board to determine appropriate consequences,” the office said.

Raffensperger, who is the state’s top election official, is one of the defendants in the lawsuit, along with Cobb County board officials and the state election board.

The moves came a day before Election Day, when one of Georgia’s U.S. Senate seats, all of the state’s congressional districts and its governor’s office are up for grabs.

In the Senate race, polls show a statistical deadlock between incumbent Democratic Sen. Raphael Warnock and Herschel Walker, the former football star who is the Republican nominee. The contest is one of a handful that will decide which party controls the Senate.

The suit said the Cobb County Election Board had failed to send absentee ballots in a timely fashion to all voters whose applications for such ballots had been accepted.

“The Cobb Board failed to timely send absentee ballots, for instance, to approximately 1,036 voters whose absentee ballot applications had been marked as issued on October 13, 2022, and October 22, 2022,” the suit filed Sunday said.

“It is expected that ballots marked as issued on other dates were also not timely processed or mailed,” the suit said.

The suit said that without emergency action by Hill, “hundreds of Cobb County voters are on the brink of disenfranchisement.”

The Cobb County board did not immediately respond to a request for comment.

On Saturday, the board issued a statement saying that it opened a probe into the ballots after some residents reported not receiving them.

Elections and Registration Director Janine Eveler blamed the situation on what the statement called “human error, with new staff not following procedures on two days to ensure ballots were mailed.”

Eveler told the board, “I am sorry that this office let these voters down.”

“Many of the absentee staff have been averaging 80 or more hours per week, and they are exhausted,” she said. “Still, that is no excuse for such a critical error.”

“They had already overnighted ballots to 194 residents from that group who had requested ballots,” the statement said. “Records show another 271 residents in that group had canceled their ballot request and voted during Advance Voting. The remaining 498 residents identified are urged to vote in person on election day.”

NASA postpones Artemis 1 rocket launch due to issues during countdown

Bank of America downgrades Chevron, calls energy stock a ‘victim of its own success’