HomePoliticsManchin balks at climate and tax pieces of Biden agenda bill but...
Politics 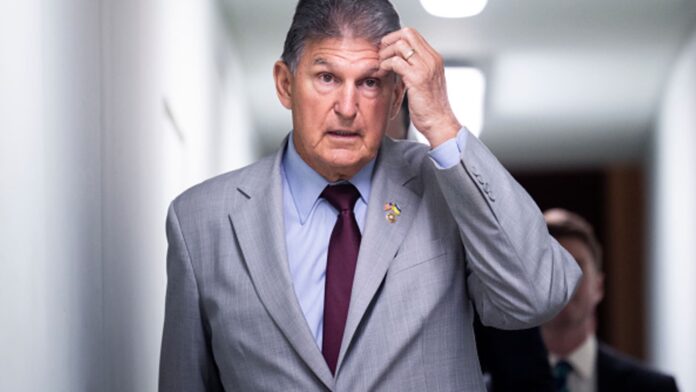 Sen. Joe Manchin in the U.S. Capitol on Tuesday, June 14, 2022. Sen. Joe Manchin, D-W.Va., and his staff told Democratic leadership on Thursday that he’s not willing to support major climate and tax provisions in a sweeping Biden agenda bill, according to a Democrat briefed on the conversations.

Sen. Joe Manchin, D-W.Va., and his staff told Democratic leadership on Thursday that he’s not willing to support major climate and tax provisions in a sweeping Biden agenda bill, according to a Democrat briefed on the conversations.

Instead, Manchin, a key centrist who holds the swing vote in the 50-50 Senate, said he is willing to back only a filibuster-proof economic bill with drug pricing and a two-year extension of funding under the Affordable Care Act, the source said.

Manchin “was explicit that he will not support a bill in August” with energy or climate provisions or one “closing tax loopholes exploited by the wealthiest” and large corporations, “despite his support for those specific things throughout the entire negotiation,” said the Democrat briefed about the discussions.

Democrats hope to pass a bill before September to prevent major insurance premium hikes under the Affordable Care Act, which could be difficult to avert if they don’t act quickly.

“Political headlines are of no value to the millions of Americans struggling to afford groceries and gas as inflation soars to 9.1%,” Manchin spokesperson Sam Runyon told NBC News in a statement. “Senator Manchin believes it’s time for leaders to put political agendas aside, reevaluate and adjust to the economic realities the country faces to avoid taking steps that add fuel to the inflation fire.”

A Democratic aide familiar with the talks said Manchin conveyed to Democratic leadership that he could support a package that includes climate and tax provisions as long as they’re paid for — or that he would just want a bill on prescription drugs and ACA money.

The negotiations have left party leaders deeply frustrated. The source who was briefed on the talks called it a reversal for Manchin after he backed a provision last week to raise some taxes on high earners to extend the solvency of Medicare.

“Manchin has now backed off of his support for this provision’s inclusion in the bill,” said the source, who requested anonymity to candidly discuss sensitive negotiations between Manchin and Schumer.

“Schumer and his staff have presented legislative text to Sen. Manchin and his staff for months,” the source added, including “major concessions and a willingness to include things that were not in previous bills.”

With no hope of winning Republican support for the package, Manchin’s position leaves Democratic leaders with a grueling choice: They can either drop the package entirely or pass the provisions he supports, which congressional Democrats overwhelmingly support.

“We know what we can pass is basically the drug pricing — on Medicare. We know that one. Is there any more we can do? I don’t know. But I’m very, very cautious,” Manchin told reporters this week.

Democrats had insisted that funding to help combat climate change, a high priority for many, would be paid for.

“If we make a real commitment on the climate front and we pay for it by making big corporations pay their fair share in taxes, that’s going to help us,” said Sen. Elizabeth Warren, D-Mass.

The likely failure of clean energy funding is a major setback in efforts to mitigate climate change, which scientists have warned will require aggressive action to move away from fossil fuels to stave off disastrous impacts. The House-passed Build Back Better Act approved $555 billion to combat climate change, but Manchin rejected the bill and slashed the proposed funding to $300 billion in recent negotiations. Now, Congress may not pass any climate funding this year.

“I’m not going to sugar coat my disappointment here, especially since nearly all issues in the climate and energy space had been resolved,” he said in a statement. “This is our last chance to prevent the most catastrophic — and costly — effects of climate change. We can’t come back in another decade and forestall hundreds of billions — if not trillions — in economic damage and undo the inevitable human toll.”

Manchin forced Democrats to sharply pare back the legislation after he came out against the larger version in December, leaving the party one vote short in the Senate. He had suggested a smaller bill with energy and climate funding, taxes and prescription drug prices. Now, those parameters have again shifted.

But Manchin still appears committed to the drug pricing provisions. He told NBC News on Tuesday that the policies to lower prescription drug costs are “going be a tremendous help.”

“Drug pricing is the most — that’s the one thing that everyone seems to agree on. Let Medicare negotiate, reduce the prices,” he said.