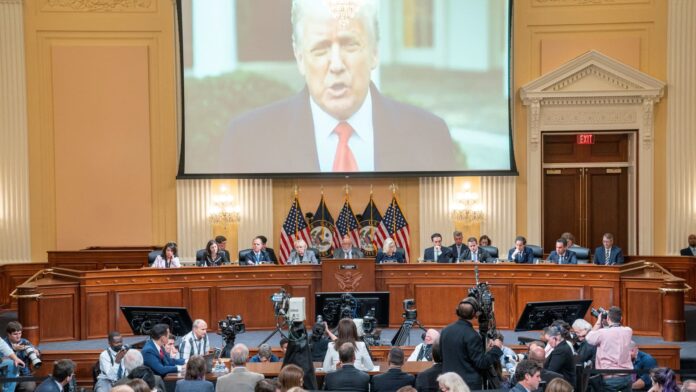 The House select committee investigating the Jan. 6 Capitol riot said its next hearing will focus on how former President Donald Trump‘s failure to quell the violent mob for several hours showed a “supreme dereliction of duty.”

The committee’s eighth public hearing, expected to air in prime time July 21, marks its last scheduled presentation of evidence implicating Trump in a multi-pronged conspiracy to overturn his 2020 election loss that culminated in the deadly invasion.

The final hearing will highlight the more-than-three-hour gap between Trump’s departure from a rally that preceded the riot on Jan. 6, 2021, and his eventual call for the mob to go home, committee members said.

The lawmakers “plan to go through that 187 minutes,” said Rep. Elaine Luria, D-Va., in an ABC News interview Wednesday afternoon. She is set to lead the hearing with Rep. Adam Kinzinger, R-Ill.

Trump made “inflammatory remarks” at the pre-riot rally, Luria said. Trump pressured then-Vice President Mike Pence to reject key electoral results and vowed to march with his supporters to the Capitol. But Trump returned to the White House after the rally and remained there as the riot played out.

The committee will look at “what happened between that moment, and then around 4:17 in the afternoon, which is 187 minutes later, when he finally made a statement to the nation, to the people at the Capitol to go home,” Luria said.

The public heard little from Trump during that interval. After 2 p.m. ET, he sent a series of tweets, first attacking Pence for lacking “the courage to do what should have been done” and then urging the violent mob that stormed the Capitol to “remain peaceful.”

At 4:17 p.m. ET, Trump tweeted a video message urging the rioters to leave, telling them, “Go home. We love you, you’re very special.”

On Tuesday afternoon, Luria tweeted that she will detail Trump’s “supreme dereliction of duty on January 6th” during next week’s hearing.

“We’re going to talk about dereliction of duty — what were his duties, as the president of the United States, to ensure the laws were faithfully executed?” she told ABC on Wednesday. “Did the president live up to his oath and his responsibility to the American people?”

Luria’s preview of the next hearing built on remarks from Vice Chair Liz Cheney, R-Wyo., who said last month that the panel would show how Trump “failed to take immediate action to stop the violence and instruct his supporters to leave the Capitol.”

“In our final hearing, you will hear a moment-by-moment account of the hourslong attack from more than a half-dozen White House staff, both live in the hearing room and via videotaped testimony. There is no doubt that President Trump was well aware of the violence as it developed,” Cheney said.

Trump, who was impeached in the House for inciting the riot but acquitted in the Senate, has denied wrongdoing and frequently attacked the select committee as a “witch hunt.”

He still spreads false claims that President Joe Biden’s 2020 electoral victory was rigged by widespread voter fraud — the same claims that motivated many of his supporters to march to the Capitol on Jan. 6.

The committee’s work is ongoing. Chairman Bennie Thompson, D-Miss., has not ruled out the possibility of scheduling more public hearings as the investigation gathers more evidence in its yearlong probe of the riot.

For instance, the panel scheduled an additional hearing on short notice in order to share the testimony of Cassidy Hutchinson, a former aide to a Trump White House chief of staff, Mark Meadows.

Another key witness, former White House counsel Pat Cipollone, sat down for an interview earlier this month after the committee issued a subpoena for his testimony. Clips of Cipollone’s testimony were peppered throughout the most recent hearing, on Tuesday, and are expected to feature prominently in the final public hearing, as well.

The final hearing also follows Cheney’s surprising revelation that Trump tried to call a yet-to-be-named witness in the investigation. A lawyer for the witness informed the committee about Trump’s call, and the panel in turn “has supplied that information to the Department of Justice,” Cheney said.

These are JPMorgan’s top stock picks for October

Peloton extends refund period for recalled Tread+ for another year

Investors can pick up yield in pockets of fixed income, experts say